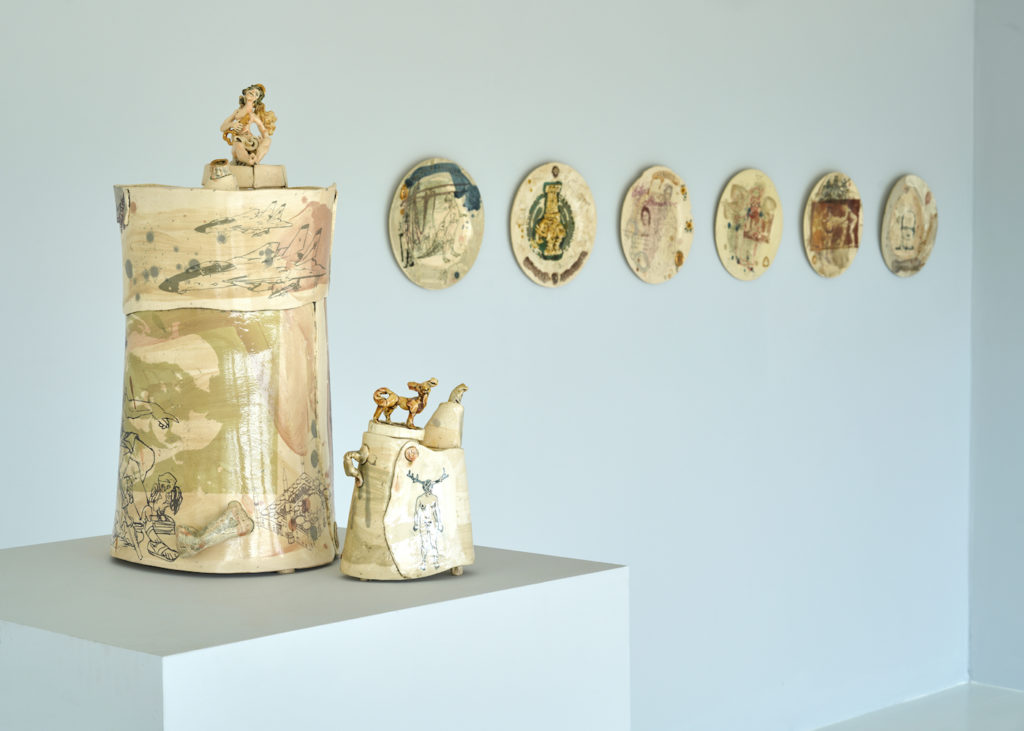 The Work of Stephen Dixon

Satire has always been a key feature of British art; from Hogarth to Spitting Image, Gillray to Banksy, artists in this country have for centuries lampooned hypocritical politicians or dim-witted dignitaries with glee.

In this respect, Stephen Dixon stands in an heroic tradition. But perhaps what makes him unusual is the scope of his savagery.

Unlike those artists from the past who mostly attacked British statesmen and British aristocracy while occasionally swiping at the French or Americans, Dixon takes aim at leaders from across the globe, from Donald Trump to Aung Sang Suu Kyi or when he was alive, Saddam Hussein.

His work targets the oil industry, the refugee crisis, slavery and asylum issues, echoing in his range, our change from imperialists to political activists and sometimes, bungling interventionists.

Born in 1957 in Peterlee in County Durham – a post-war town named after a social reformer bent on ending squalor – Dixon was steeped in politics from an early age; he is the son of a teacher who was an active member of the Labour Party and the grandson and nephew of a tribe of coal miners.

‘From the start I was never interested in making functional pieces, and more interested in telling stories and making statements’ he says.

One of the highlights of this show is a series of oil cans made in clay highlighting the folly of the Iraq War.

Although the same size as a real oil can, Dixon’s are wonky and plastered with images of Frankenstein – ciphers for the monster he thinks the West created in the Middle East with their initial support of Saddam Hussein – as well as icons of American audacity and derring-do like Charlton Heston pictured on a gas-guzzling motorbike.

Robustly modelled, with handles like cuffed ears, spouts like snouts and featuring an array of jaunty clay odalisques lying on top, these vessels have a strong physical presence that is complemented by the gauzy, photographic images wrapped like clothes around their trunks. 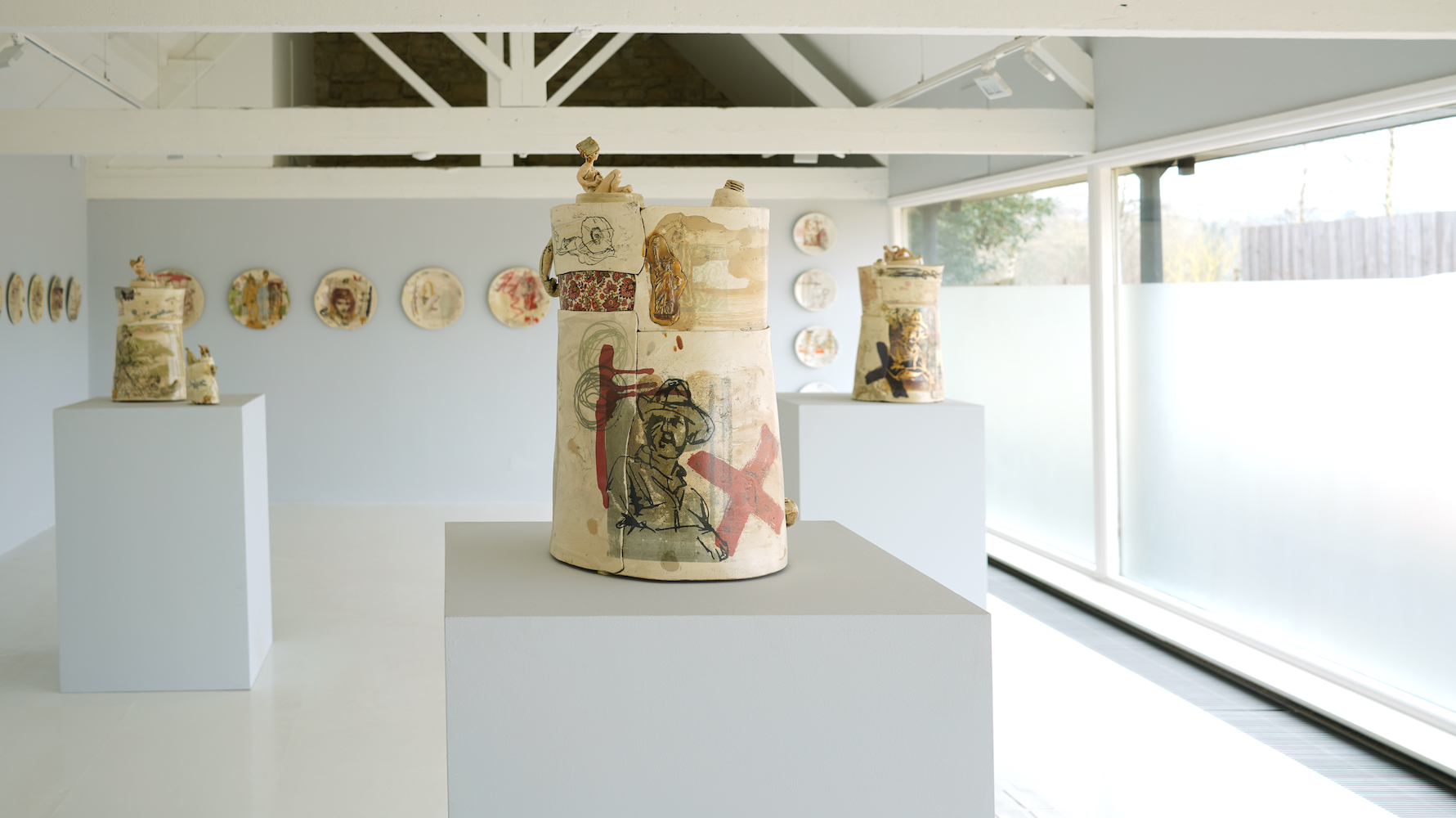 In works as bitingly accusatory as they are friendly to look at, icons of Eastern culture like the Kama Sutra, the tombs at Petra or the defaced Bamiyan Buddhas are superimposed with highlights of those from the West; the Laocoon, Michelangelo’s David and flocks of US fighter jets.

‘I want to draw attention to the highest and lowest forms of civilization in each kind of culture,’ explains Dixon.

Although more of a teapot than an oil canister, a particularly caustic piece in this show is a vessel decorated with a drawing of Diana, Princess of Wales presented as the Hunted rather than the Huntress with antlers on her head. Hounded by dogs Dixon has graphically drawn her womb – making the point that her main function was to bear an heir to the throne.

Another remarkable work decorated with a picture of a teenage girl brandishing a Kalashnikov is called 21 Countries – a reference to the number of nations bombed by the Americans since the Second World War.

It is not just America that seems to provoke Dixon’s ire, however. Recently he has turned his attention to the migrant crisis, seeing a parallel between the journey of Majolica – the tin glazed wares – and that of refugees.

Originally from North Africa Majolica spread through Italy, France and the Netherlands before finally arriving in England in the form of English Delftware. 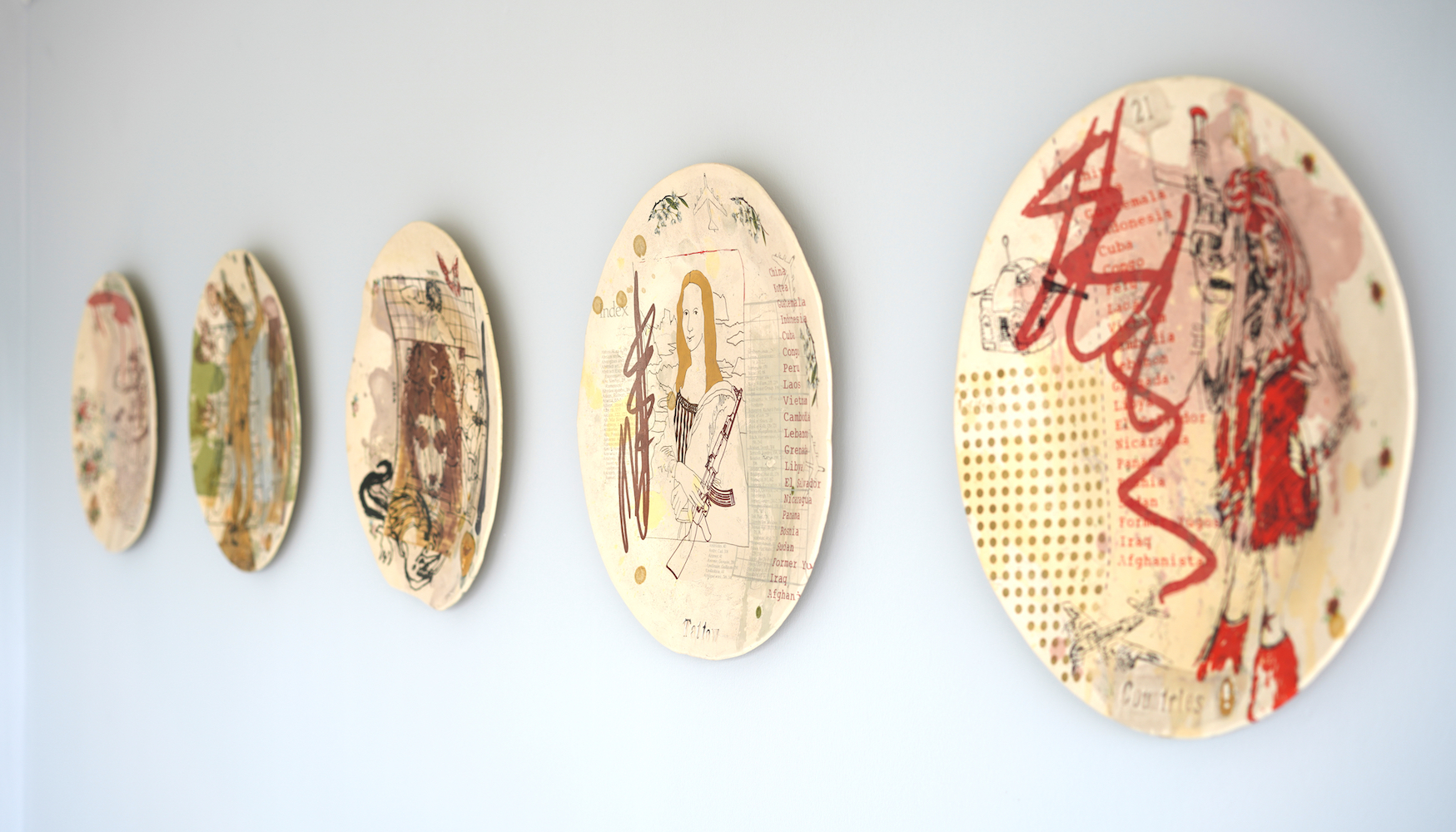 Doggedly committed to a form of art that has been pretty unfashionable during the last fifty years, he has ploughed his own furrow with exceptional zeal, maximising the impact of his work by learning how best to apply water-based screen printed transfers to ceramics – attending universities and colleges in Edinburgh, Cork, Beirut, even Australia to become one of the world leading practitioners in this technique.

Dixon and Carol McNicoll – another questioning ceramicist also in this exhibition – and the likes of Grayson Perry and Edmund de Waal prove beyond doubt that contemporary painters, rightly lauded for their powerful polemic do not have the stage to themselves any more.

The difference is that contemporary ceramic can form the centrepiece of your table as well as your wall.

‘My career as a maker is defined by a commitment to politically engaged practice, and a belief in the power of craft to inform the public imagination and to make a difference,’ says Dixon.

In its technical skill, aesthetic and sensual allure and powerful narratives, Dixon’s work engages us on many levels chief of which seems to have been as a harbinger of the formidable new political age we have suddenly entered.