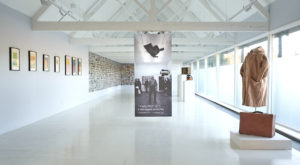 Ti Parks graduated from the Slade School in 1962. He moved to Australia in 1964 and became an important influence in the contemporary art world there. He was the Australian representative at the Paris Biennale (1973), the Sydney Biennale (1976) and as an invited performance artist at the Venice Biennale (2007). Since the 1960’s he has exhibited extensively in Australia, New Zealand, England and France.

Ti Parks lived and worked in Blackheath London after his return from Australia in 1976. He continued to exhibit and perform internationally until his death in 2017. Intuitive and intellectual, his work reflects his core belief in the importance of chance and playfulness. These ideas find wide-ranging expression in collage, etching, paintings, sculpture and performance. 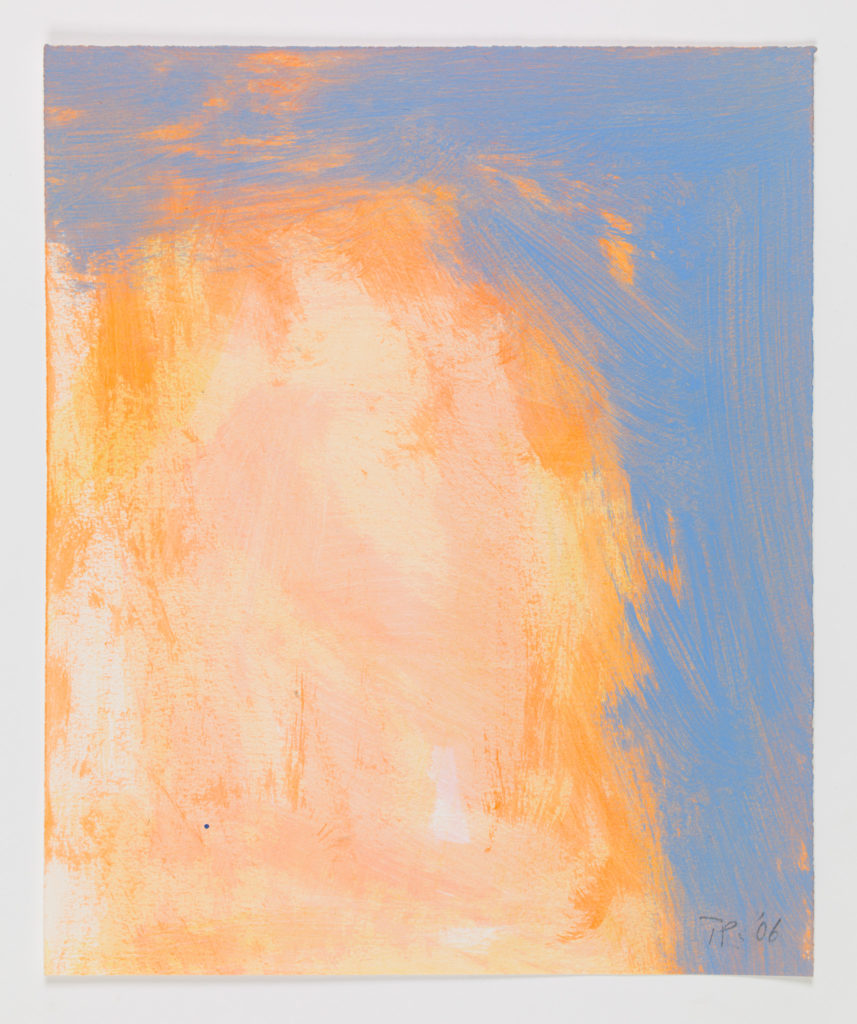 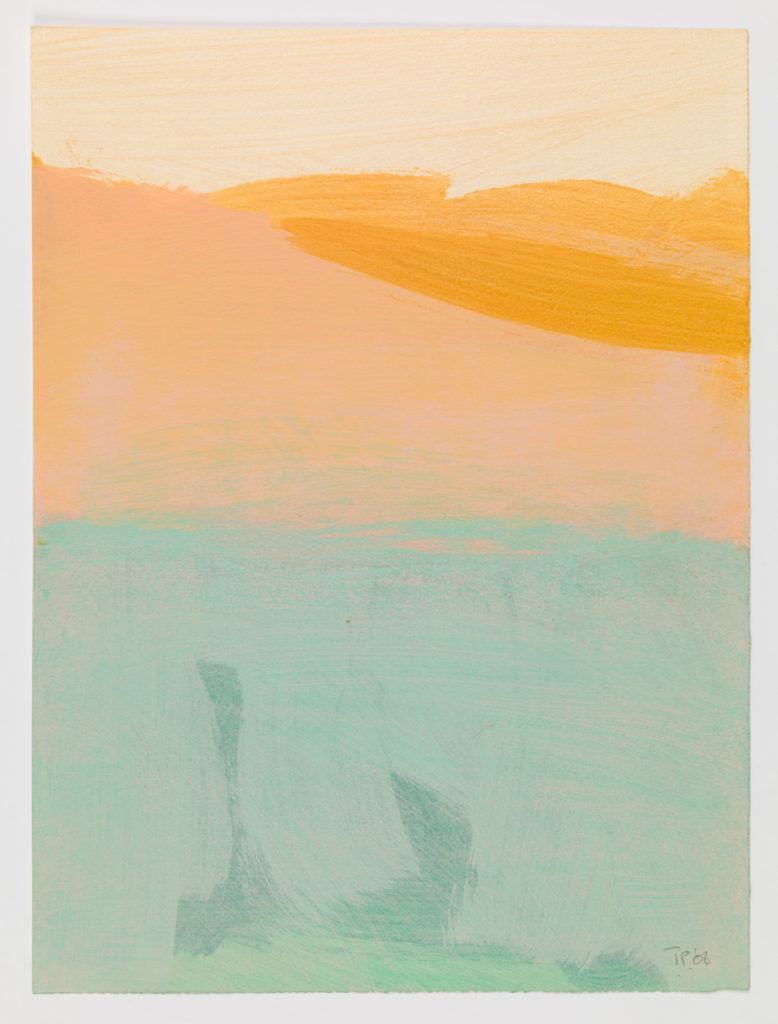 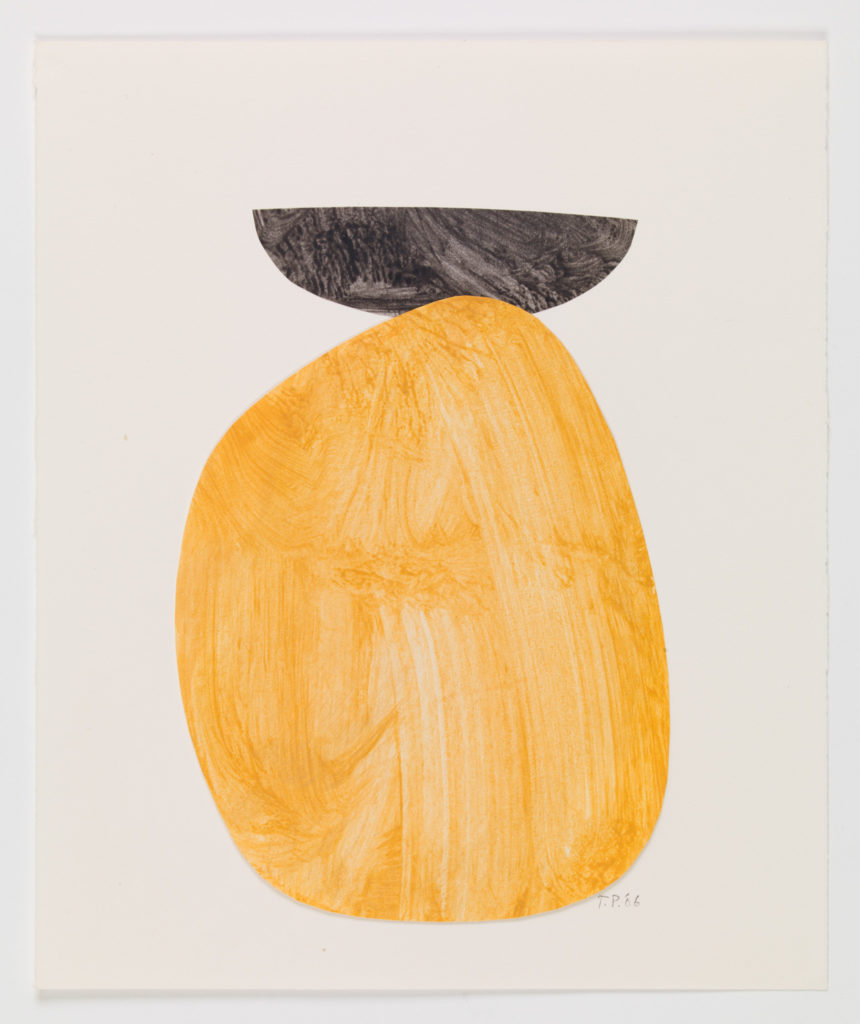 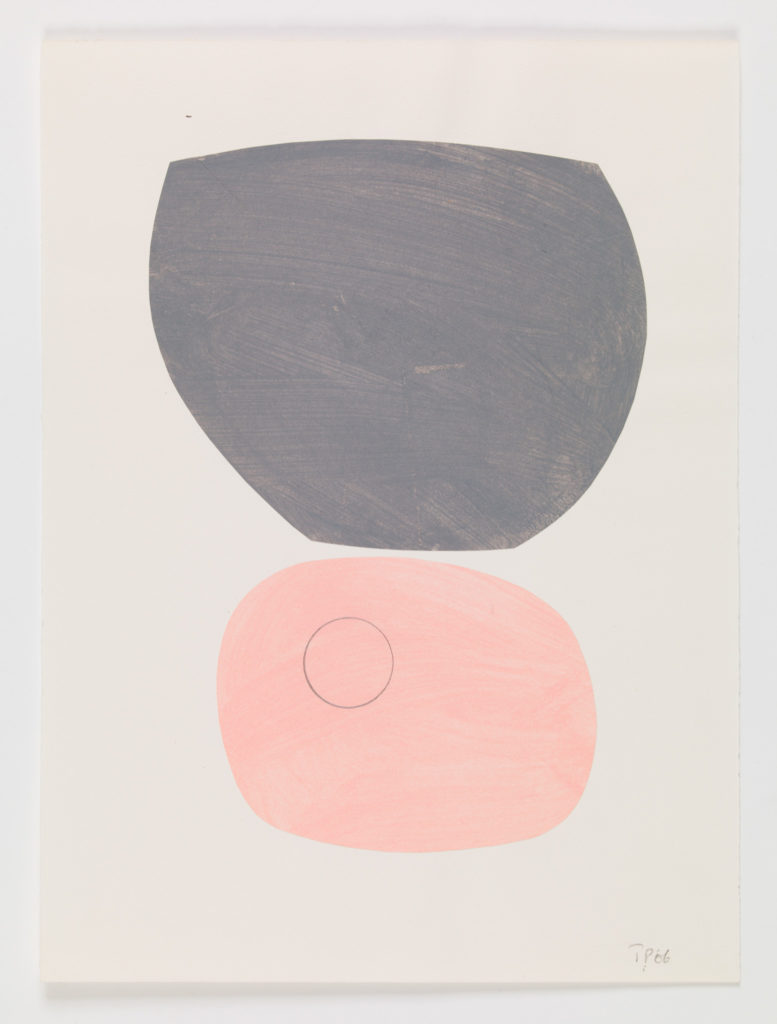 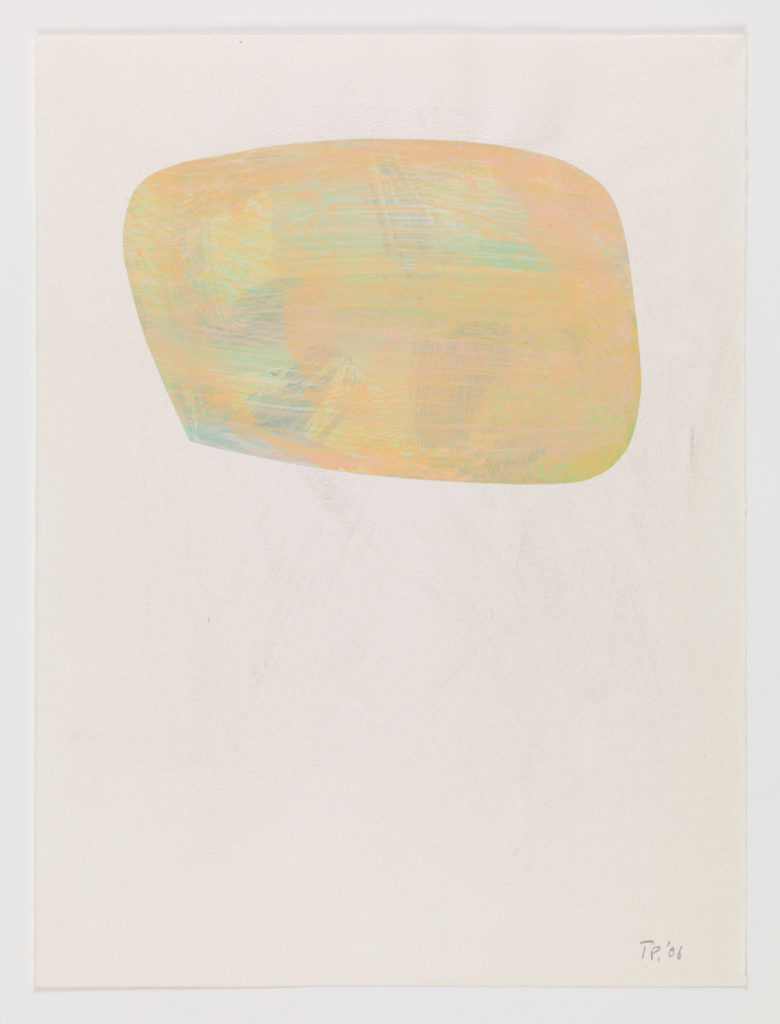 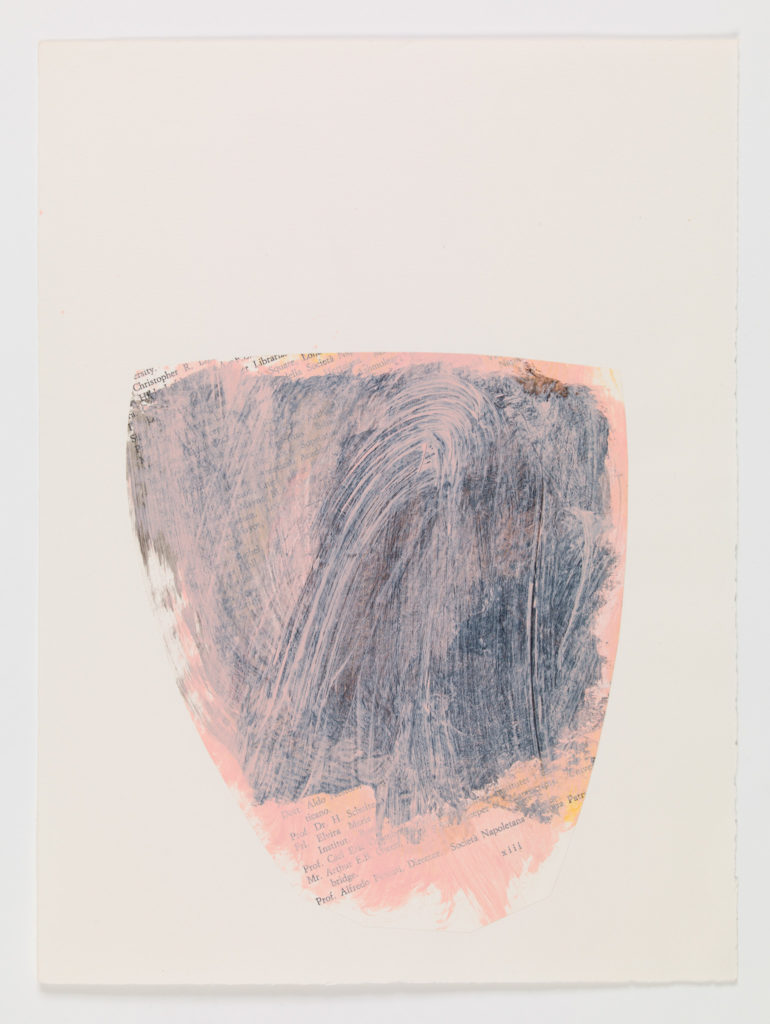 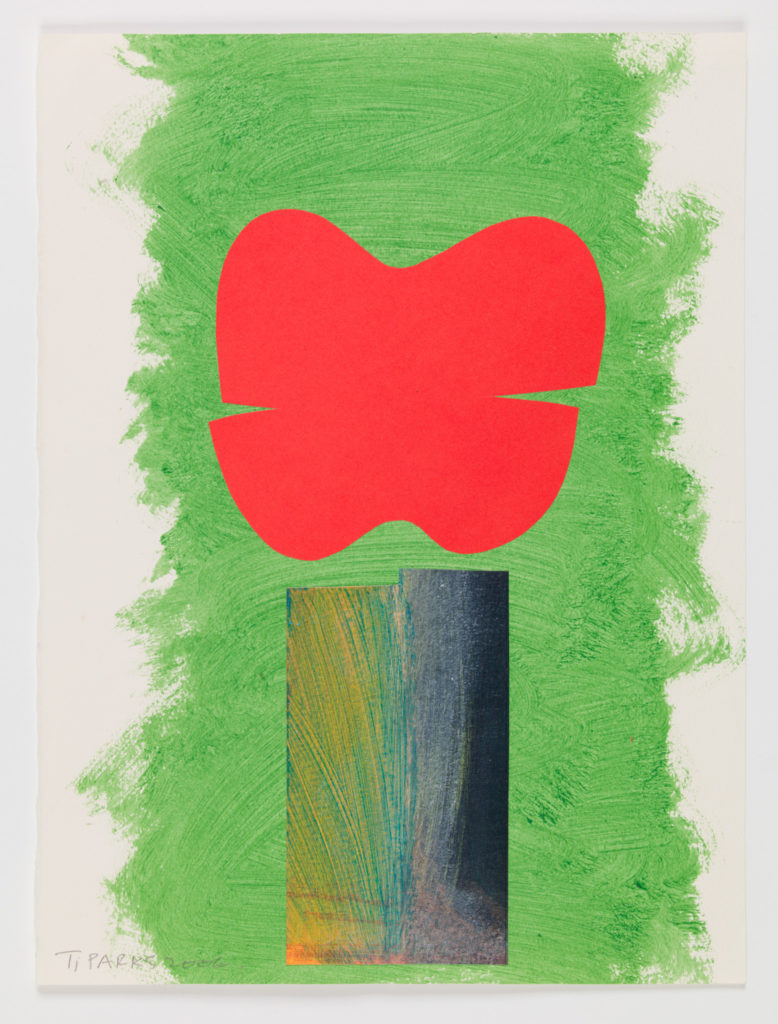 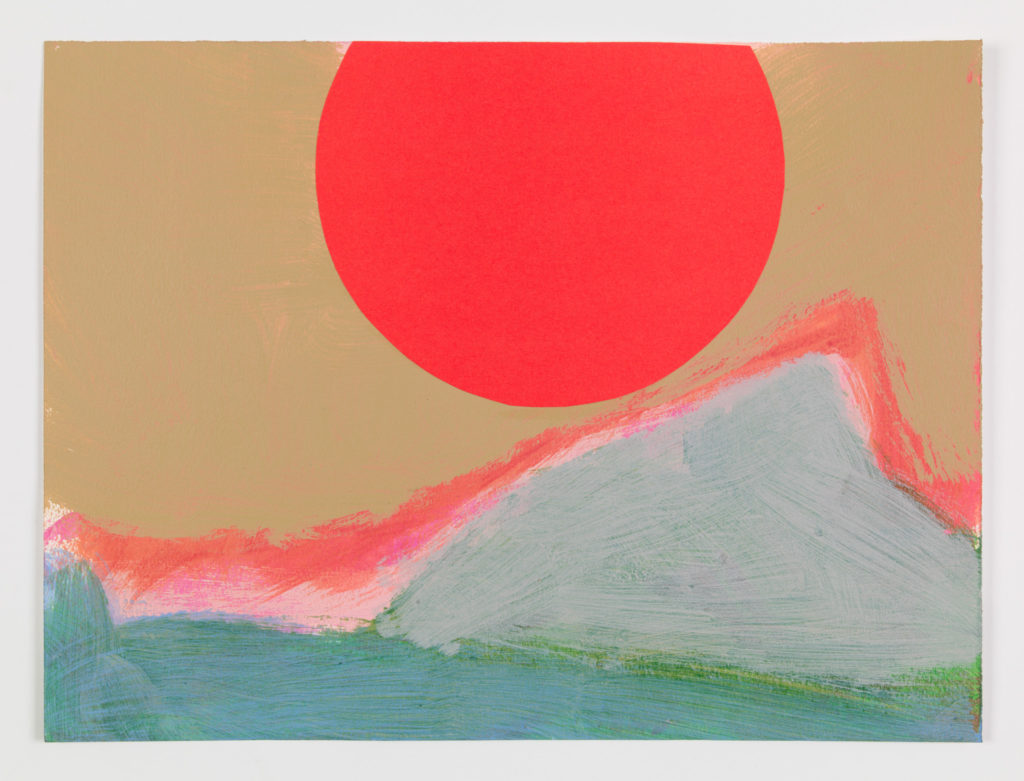 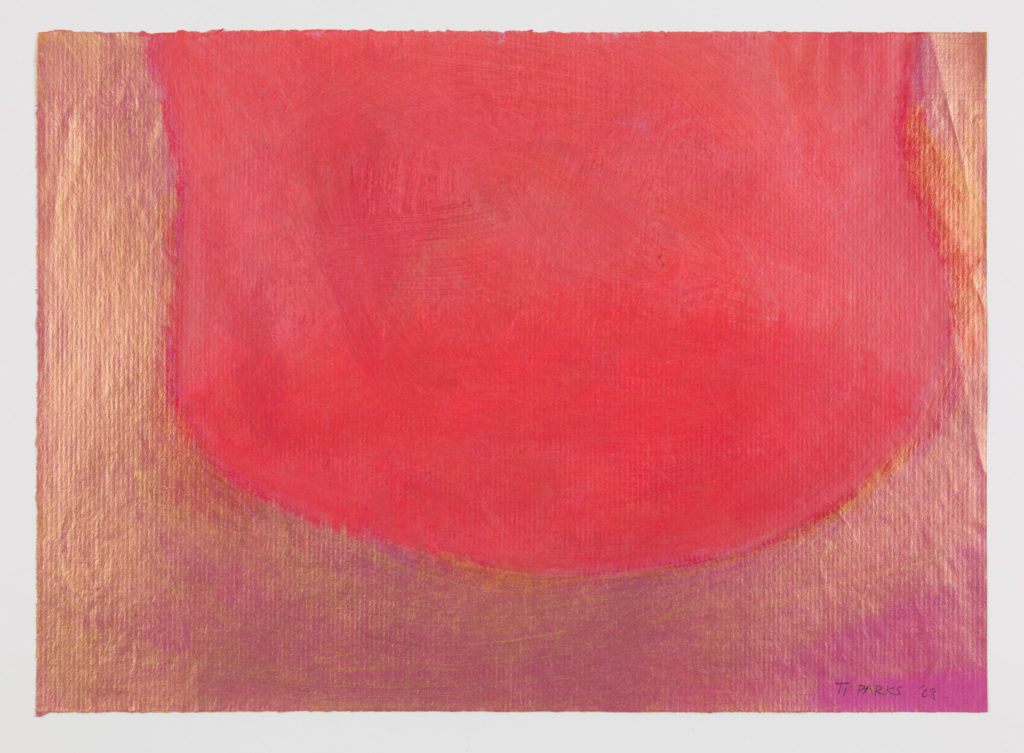 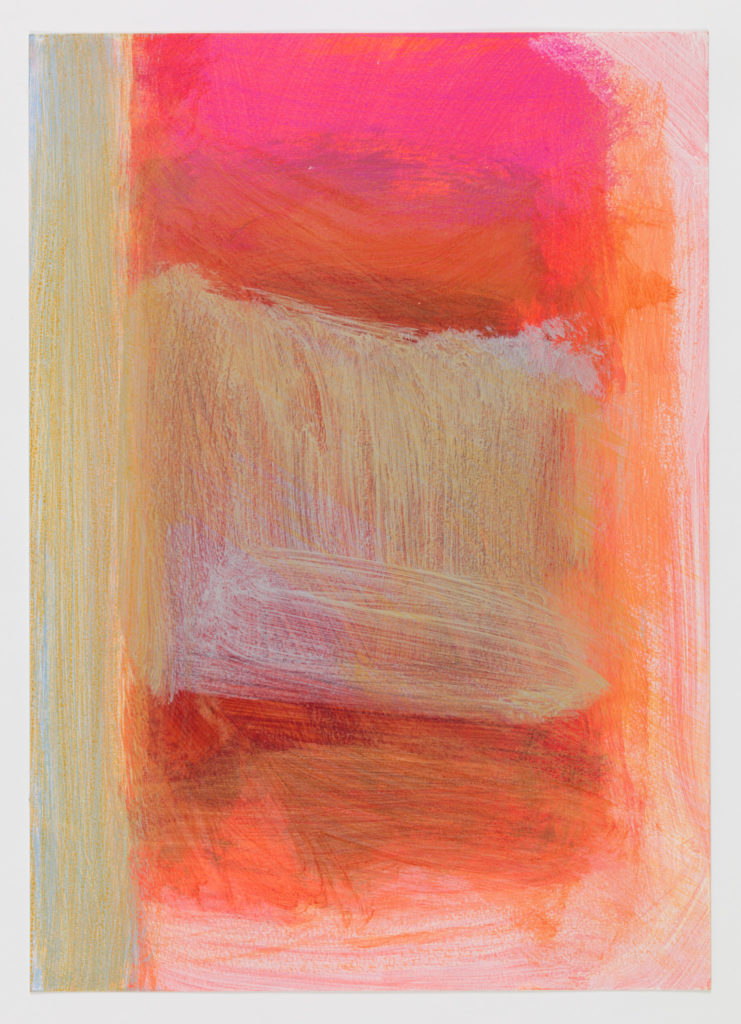 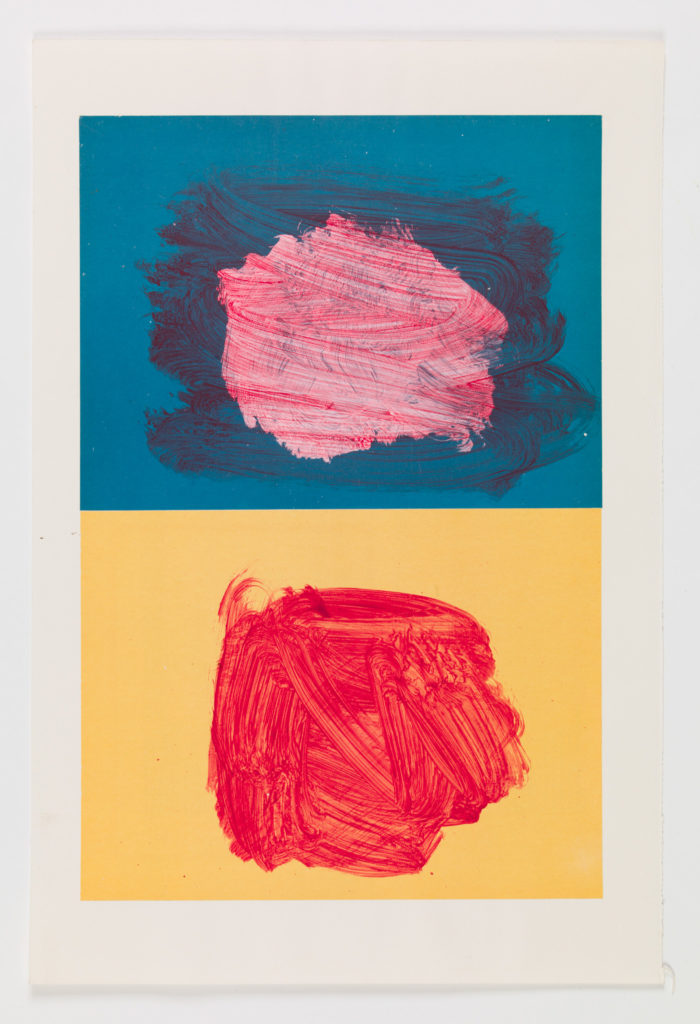 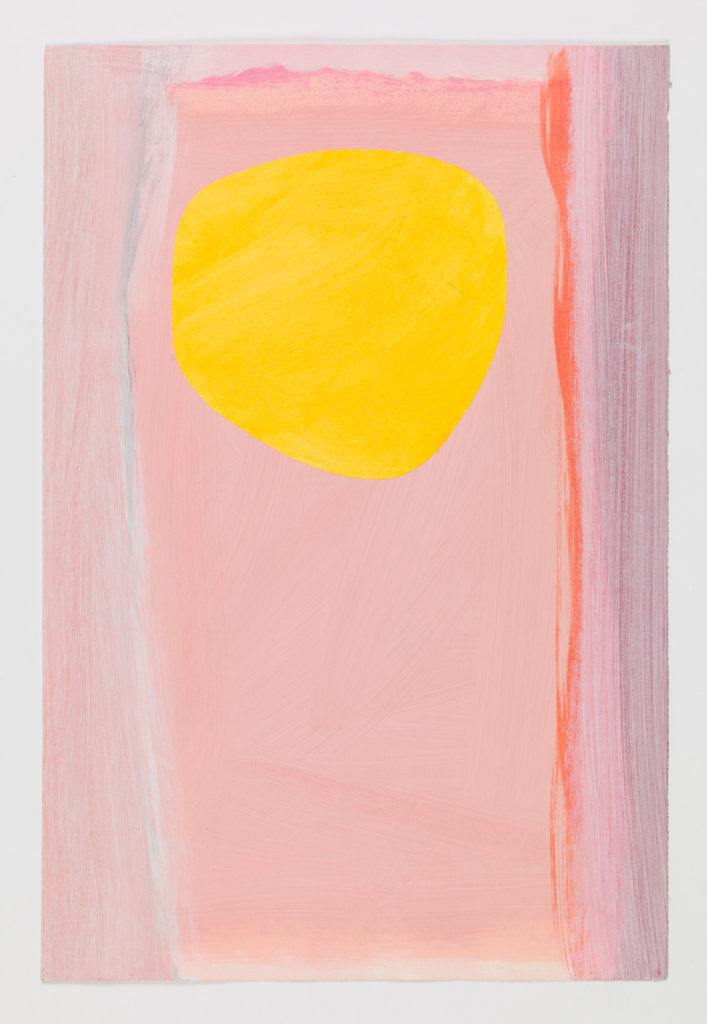 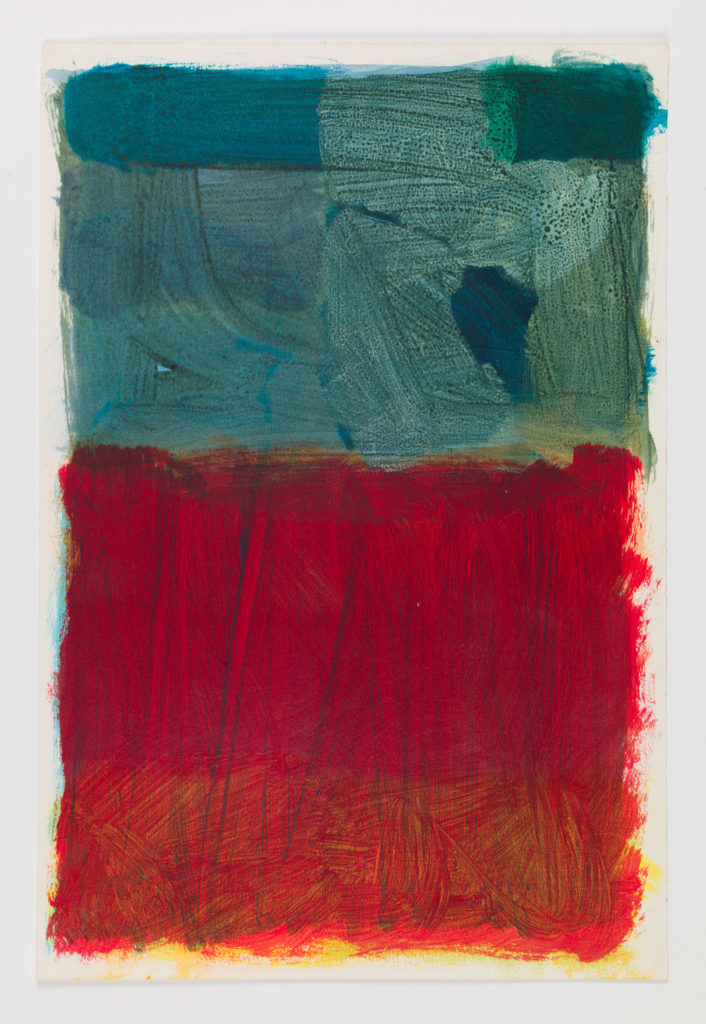 On the wall of his studio in Blackheath, South London, Ti Parks had pinned some words by Samuel Beckett (1906-1989).

“Don’t ask me for any meaning in the thing; it just is what it is.”

This rejection of the simplistic question “what’s it about?” was as important to Parks as it was to that great Irish writer of life as a tragi-comedy.

Like Beckett, Parks relished the humour, often dark, that accompanies the banality and bathos of the everyday.

Another influence was the German dada artist Kurt Schwitters; Parks, who coined the term “performontage” to describe his performances with objects, participated in the Kurt Schwitters Merz Night held at the Victoria and Albert Museum in 2002.  Merz, a nonsense word invented by Schwitters to describe the pre-war artist’s collage and assemblage works based on scavenged scrap materials, chimed strongly with elements of Parks practice.

A collagist, printmaker, painter, sculptor, installationist, performance artist and creator of artists’ books, Ti Parks was above all else an experimental artist.

He revelled in serendipity, the chance encounters with objects and ideas that could fire the imagination and launch a new art project. The juxtaposition of the disparate was a central theme in Parks’ work. He liked to disorientate and discombobulate the spectator, to make works, as the late curator and art critic Jennifer Phipps observed “which resemble the ordinary chaos of the world.”

His friend and colleague, the Italo-Australian artist and curator Domenico de Clario described him as a jester, someone “at ease with asking impossible questions”.

Many of those “questions” had to do with what he termed his obsessions; materials and textures, imagery and ways of seeing; a loose list would include mohair and wool, fur, fetish, erotica, female images, garments, serendipity, improvisation, wit, irony, satire, parody and self-parody.

The collages in this exhibition reveal these preoccupations to the full, as does their genesis, a vast cache of identical postcards, printers’ rejects, discovered in a South London charity shop in the early 1980s. They were of Venice’s famed San Marco horses, over 10,000 of them, originally destined for the British Museum.

Parks decided to collage onto them and they became the 10,000 Collages project. By the end of his life he had completed, numbered and signed more than 8000. But although he plucked a large number out of the air to give shape to the project, the actual number wasn’t important. It was the repetition, the variation within multiplicity, that spurred him forward.

Parks’ creation of artist’s books is also linked to his interest in collage and he became very influential in that genre. These objects, hand stitched using Japanese methods, encompass random finds.

His Road Print Series is perhaps the best known of this genre and going for a walk with Parks was a potentially unnerving experience; he would often dart into the thoroughfare to retrieve a scrap of paper that had a footprint imprinted on it, or the tread marks of a car tyre. He also relished retrieving and incorporating anonymous lists and notes that had become separated from their original owners and function.

Not all books allow such hints at narrative; among his creations are the un-books, those that are folded and stitched in such a way as to be unopenable.

the link between form and function playfully, unnervingly severed.

These ideas come through more subtly in his paintings, but painting was also central to his practice whether alone or combined with collage and applying pigment to a surface was as important as the shapes and colours of his abstract explorations.

He started to explore some of these ideas at art school in England but they came to fruition on the other side of the world.

Parks was born in 1939 and studied painting and printmaking at Bromley College of Art and the Slade School of Fine Art between 1956 and ’63.

After a short time in London, during which he exhibited with the Young Contemporaries and the London Group, he left for Australia; the move was a long-held ambition and the decade he spent there was hugely influential and shaped the rest of his professional life.

Settling in Melbourne, he became part of a loose group that included conceptual artists and colour field abstractionists, experimenters in found sculptural works and ephemeral assemblages.

It was here too that he developed his famed  performative interactions with, and animation of found objects. Duffle Coat, one of his later performances, is also part of this exhibition.

Parks exhibited widely during his time in Australia including at the influential Pinacotheca Gallery in Melbourne and at Sydney’s Watters Gallery and one of his photo collages, Polynesian 100 was shown at the 8th Paris Biennale in 1973.

His work was also included in the Biennale of Sydney in 1976 but by then he had returned to Britain after a year’s teaching in Auckland, New Zealand.

Parks continued to exhibit and take up residencies in Australia including at the influential Gertrude Contemporary Art Spaces in 2004, but based himself in the UK.

He preferred exhibiting with experimental and emerging spaces and utilising derelict spaces alongside the Thames. For several years he was a regular at the London Artists Book Fair, where he became renowned not just for his books but the quietly subversive performances that would punctuate the day. The objects he used included a ceramic dog, a large snail, an outsized sponge filled with water and a wind-up clock. At a given signal, bell, gong, whistle, these objects would become part of a minimalist piece of theatre. The snail, for instance, sitting on a pile of computer printout, would have a sheet of paper removed beneath it until, by the end of the performance, which could take several hours, the snail had left a paper trail.

Even when temporarily crippled by arthritis and using crutches, he performed, most notably at the 2007 Venice Biennale, at the invitation of Australian artist Christian Capurro.

Parks, who died in 2017, influenced not only his own generation but remains highly relevant for contemporary ones too. His work is in various collections including the Tate, the Museum of Modern Art, New York and national and state collections throughout Australia.

I invited Ti to collaborate with me at the Venice Biennale because of his manner and poise as a performer.

There was the inquisitive yet sure way that he handled things, moved them by foot, folded or tossed them about, initiated things and completed them.

It was as if these mostly commonplace things, accompanied by the odd personal talisman, were chosen because they were both close at hand and needed to be kept there, in some unspoken accord. (Yet, all the while, keeping their separateness.) Nothing extraneous seemed to come into that orbit.

And there was his patience, the particular manner of his waiting. He timed movements like he spaced objects, carefully, with an elusive purpose.

I distinctly remember the anticipation he could generate out of so little, while never hiding his means (like a magician with nothing up his sleeve).

There were the surprises, and the gentle negations too, like dipping all those wallets into that large tin of white paint at Ocular Lab. And, how abruptly he could shatter the decorum, whether tumbling-crashing metal lockers to the floor at Gertrude Street or, after patiently waiting all day at his ICA artist bookfair table, laconically gloving his hands, and igniting his shrieking chainsaw.

Ti came to Venice and, in sight of the real horses of San Marco, sent reverberations out across the lagoon with his understated, affecting way. 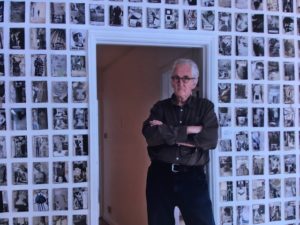 Ti Parks has been making collages since the early 1960’s. Originally influenced by the work of Max Ernst and Kurt Schwitters, he has developed a method and style which is uniquely his own. He works fast; selecting, cutting and placing, and relying on intuition and chance to make images equal to the best classic surrealist ‘corps exquis’.

‘Ten Thousand Collages’ were started in 1982. The original stimulus was the chance acquisition of ten thousand identical cards. Each collage is unique original, but all have their bases, scratched blue-green reproductions of a photograph of the San Marco horses in Venice. This has no special significance, but occasionally the original imagery does become part of the collage, i.e. when a bronze horse’s muzzle appears to be nibbling a trim sandalled foot.

‘Ten Thousand Collages’ can either be exhibited mounted and framed singly or in groups, or installed as large will pieces made up of hundreds of individual collages temporarily fixed directly to the wall and close together to achieve an effective ‘allover’ rippling look.  These large wall pieces need never be the same. They should be assembled or reassembled randomly or intuitively by the artist, exhibition organiser or purchaser in any suitable size or proportion.

The original snail, large white and made from moulded plastic was found in a Chinese emporium in Melbourne. The extraordinarily large size and the whole question of its potential use attracted Ti. He bought it and the snail was included in a performance in the ‘Tent show’ at the Gertrude Street Gallery Melbourne in 2004. ‘Snail 1’ was shipped back to London, weeks later the snail arrived in several bits.

Reborn the snail had acquired a new shell and snail like personality, it became part of many performances and was joined by ‘Snail 2’ and ‘Snail 3’.

This performance is slow. The snail sits on a pack of folded computer print paper. At any given signal, bell, whistle, gong etc, the performer very gently moves the Snail one whole paper fold or less. This is then repeated at regular intervals decided by the performer, five minutes, 30 minutes or longer. The Snail will very slowly leave a trail of white paper…the length of the performance is not necessarily specific.

Snail 1 is now in retirement. 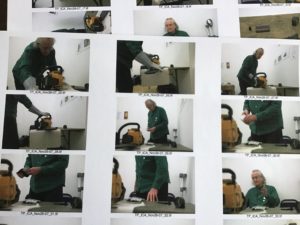 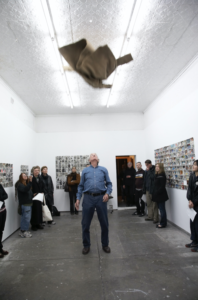 The ‘engima’ or enigma of Ti Parks’ Duffle Coat is never explained, its choreography is loose and of no fixed time, the performer can be replaced and the coat itself is interchangeable.

‘Duffle Coat’ has been performed at the Barbican gallery, the Kurt Schwitters Merz night at the Victoria and Albert Museum, Marcus Cambell Art Books adjacent to the Tate Modern, at the opening of the National Gallery Victoria, Gertrude Street Contemporary Artspace, Ocular Lab all in Melbourne, at Artspace Mackay in North Queensland, Blackheath London and most recently at Frank’s Friends Exhibition at the Cello Factory in London 2012.

Recorded video available to watch at the gallery.