an essay by Hope Francis 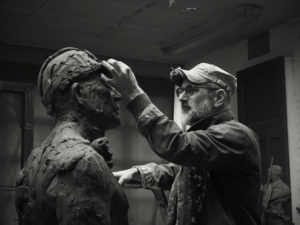 A Rich Seam will open at Messums Yorkshire on October 1, 2021.

For advance information and to join us there please register interest

Coal mining in Britain goes as far back as the Roman times, almost all coal resources occur in the rocks of the Carboniferous Age. With the Industrial Revolution, coal production drastically increased, with the expansion of the canal system providing better access to coal producing areas and steam technology providing a use for it. From the 1950s the decline of Britain’s mines began with an estimated 950 mines closed between 1947 and 1994. Mining was a major employer in Doncaster, creating an important heritage for the community that still lives there today.

The title A Rich Seam refers to the high quality of the coal bed, that surrounds Doncaster, which made it a prime area for mining. In 2018 Edwards was awarded a commission by Doncaster Council to create a sculpture that celebrates the lives of those who had worked in the pits around Doncaster. Before this commission there was nothing in Doncaster to show that it was a mining community or had any mining history. Joan Hart who was one of those who sat for their portrait stated that miners were “a unique breed of men” and that it was important to have something to remember the miners by. Laurence spent many months going to South Yorkshire getting to know community by spending time with them in the miners welfare clubs, pubs and other community spaces. What stood out to him was the passion and commonalities between the testimonies “All spoke of camaraderie, of the danger of death and of community and the real sense of loss which is impossible to grasp. One miner said to me imagine the government closing ‘Art’ down, stopping you doing it ever again, then imagine a city full of artists.”

Public sculpture in Britain has seen a change of focus in recent years, moving towards art that means something to the community the art is in rather than having a primarily aesthetic purpose. Sculptures of famous ‘heroes’ are no longer relevant, rather we are beginning to create sculpture which is relevant and relatable to the public. This project offers a very different paradigm: the everyday as the heroic, depicting and celebrating the real people of Doncaster with real stories and real faces… ‘Almost by accident, it’s tapped into this thread of public art now,’ agrees Edwards. ‘Public art is no longer the Generals on horseback in Trafalgar Square, it’s more about people’s social histories. So, I chimed with the contemporary way that public art is evolving. It’s very timely. And I’m very pleased about that, to be working within a social history context.’ Keith Marshall who worked at the Brodsworth Colliery and was sculpted by Laurence Edwards for the niches in the sculpture said that “Back then, everything moved around coal. There was a pit in every village. Now, my grandchildren have never seen a piece of it”. He went on to say that now there “will be something that my grandchildren can take their grandchildren to, and learn our history. [1]

The creative process of this sculpture directly involved the community, all the moulding sessions were recorded by students at Doncaster College and have been placed on YouTube for the public to view. The sculpture stands at the exterior of the Frenchgate Centre, which is the new central hub of the town and forms another part of the rejuvenation project. Its central positioning echoes the centrality of mining to the community and importance it still holds. So not only does the sculpture represent the community, it was created alongside the community and placed at its heart.