An essay by Philip Marsden 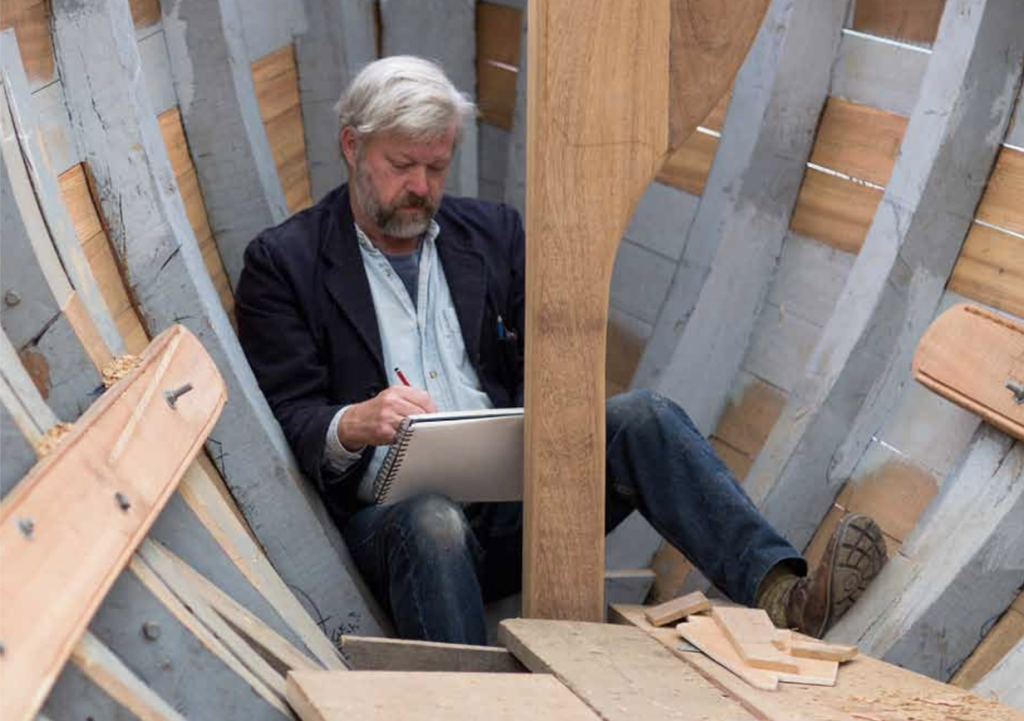 A February gale had just gone through when James and Catherine Dodds came to visit. The gale had broken the mooring of my little Cornish coble and left it on a beach some way upstream. The boat was undamaged but I’d just been down at the creek, fumbling in the low-water gloop to fix a new length of ground chain to the block.

‘I won’t shake your hand,’ I held up my own to greet them. It was covered in mud, as were my boots and trousers, my coat – probably also my face and hair.

‘That’, said Catherine, ‘is how James looks much of the time at home. Mud is his habitat.’

The Fal in Cornwall, the Colne in Essex. Two short rivers flowing into different seas, each with their fine silt banks, their accumulated sediment, each with a world of maritime history packed into its brief estuary. On the Colne, where Dodds has his studio, five thousand ships have been built in the last couple of centuries, fishing boats and freighters and some of the fastest schooners ever to sail the sea. It is as if the mud itself spawned these creatures, which took shape and grew from its slimy flats, to slide off into the tide and fly across the ocean.

Down at Falmouth, tucked in behind Pendennis Castle, is a pool where ships have been sheltering since prehistory, where they’ve been assembled, victualled, re-sparred and repaired, where superyachts are now designed and built. It is a natural harbour that has been as busy with boats as any along the Atlantic seaboard. The National Maritime Museum Cornwall now stands there, on partially-reclaimed land, and in its timber-and-glass gallery was hanging, at the time, this same collection of James Dodds’s paintings and prints. Hence the visit.

I’d been to the gallery the week before. It was my first sight of his pictures in the flesh. His boats filled the space around them with a physicality that took me aback.  They were impossible to ignore. In other hands, reality like this might be merely literal or photographic. But not here. Through the vessels’ grainy textures and meticulous forms, bare of any context, James Dodds persuades us to dwell on a simple notion: what a strange and wonderful thing is a boat.

Among the paintings, prominence is given to a group of workboats –  Falmouth quay punts, oyster-dredgers, shrimpers and luggers, gigs and tenders and dinghies. Most are painted bow-on, and in their anonymous background they look suspended. These are the foot-soldiers of the maritime army, the inshore corps of jobbing craft. They are not embellished like old ships-of-the-line, nor made sleek like a yacht. They are built for labour, for day fishing, for fetching and carrying – yet each one glows with a nobility that goes far beyond its function.

Joseph Conrad believed that ‘the love that is given to ships is profoundly different from the love men feel for every other work of their hands’. That difference lies at the heart of boat-building, a tradition as old as the first migrations of homo sapiens. Shaping wood for the alien forces of the water requires problem-solving and techniques that equate to little on land. Together they have produced an object that now, after many thousands of years, looks like nothing else. Boats have grown and evolved with us, a companion species like the

Dodds manages to place his boats in that enigmatic space between the animate and the inanimate. They are taut with muscularity, power and strength at rest. It takes little to picture them driving into steep seas, or muled up with supplies or a good haul of fish, or dashing towards a ship to win the pilotage.  But they are the work of human hands, designed by an individual’s eye and judgement, nothing more than an inert assemblage of dead timber and metal fastenings. 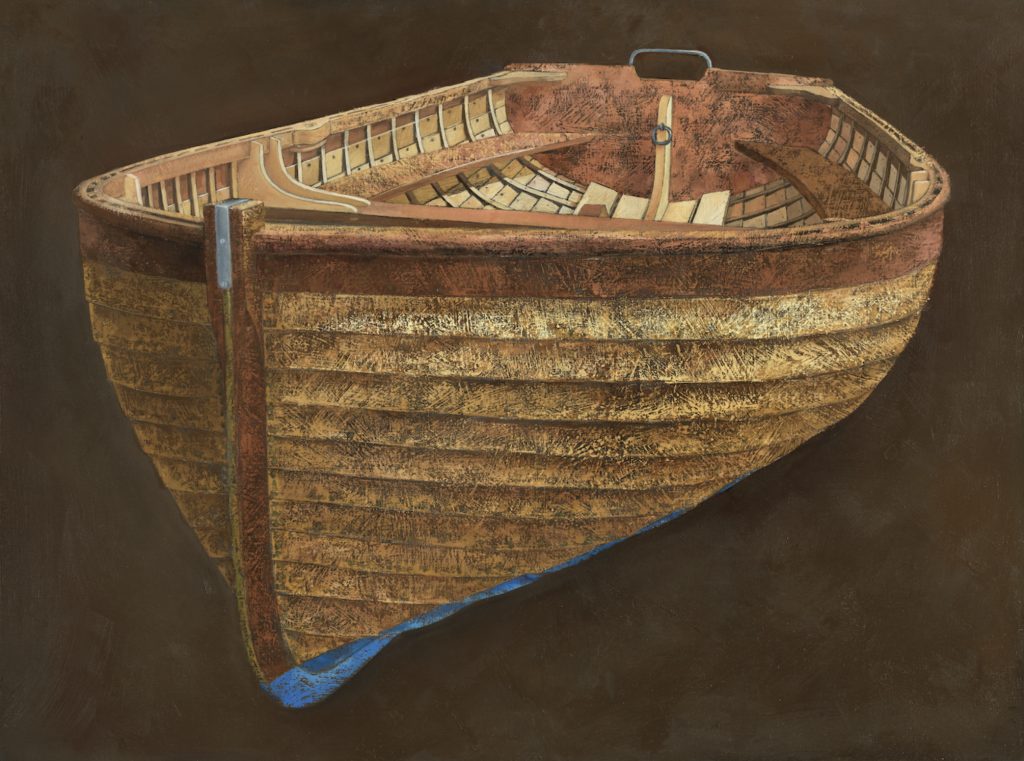 I confess I’m something of a pedant when it comes to boat pictures. I have an annoying tendency to look first at the lines and if they are not quite right, find it hard to look again. But Dodds knows boats, not only as someone who has been on and around them all his life, who lives by the rhythm of the tides, whose habitats include estuary mud – but as a man who trained and worked as a shipwright. He understands the anatomy of boats, the processes that go into creating them – the lofting-out and the half-models and moulds, the string-lines and battens, the framing and scarphing and caulking. And he knows that particular frisson of sea-fear, and the deep trust that every sea-goer places in their vessel.

Among his pictures in Falmouth, I realised for the first time the reasons for my pedantry. I saw why it is so hard to look past an unboat-like shape, why any degree of abstraction of wooden craft feels wrong. It is because a boat’s shape is already an abstraction. In its build – the bend and sheer of the hull, the rise of the stem, the ogee or lute of the transom – the form of a waterborne vessel is far removed from the familiar. It is as weird as any work of art, and as true. To alter or distort the lines would be to diminish it. What James Dodds does is less interpretation than homage.

We were sitting in the kitchen, talking boats. We spoke about my other boat, a 31-foot wooden sloop, now winter-covered in a creek to the south, and built over fifty years ago near Dodds’s home in Essex. We spoke about the oak frames and fittings and its character at sea, my recent navigation up the west coast of Ireland. We spoke about the various boats he had had, and about his print-making and his proofing press and how he prepared for the paintings – the laying out, the scaling-up and the intricate geometry of the sketching. ‘I tend to approach the painting of a boat as if I was building it.’

One thing that struck me about the boat images was their texture. The hulls’ surfaces have a quality that is far from real, yet appears completely authentic. Dodds builds up the paint from a dark ground, adding pigment layer by layer and then scraping it back with a curved skinning knife. The colours too are slight enhancements – stronger, brighter than anything you might see used in a boatshed. But rather than deviations, they help to emphasize the principal intent: to present the beauty and mystery of the boats’ form.

‘Look at the angle,’ we were leafing through a catalogue, Dodds pointing out the aspect of many of the images. ‘I like to position the boats so that a part of the interior is hidden, and there’s a slight glow from inside, from the space you cannot see.’ 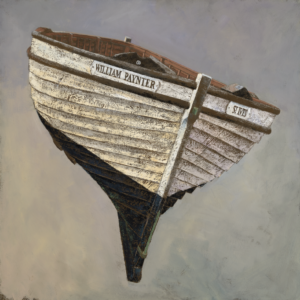 There’s an absence in these paintings. It’s not clear at first, but spend a few minutes with them and you become aware of what’s missing: the hand that shaped the boats, that planned and constructed them, the town beaches they lay on, the crews that heaved them into the water. For all their paint-craft and shipwrights’ method, these pictures tell a human story. ‘I often think of particular people as I paint. My father, for instance – he’s there in the grey boat.’

In his omission, Dodds only makes the boats more miraculous. What might be ignored on the strand, an old hulk rotting in the mud, or a clinker-built dinghy well-worked and retired, is displayed here in all its original purity and grace. The story of these craft is pared-back, the role of the characters all the stronger for being elsewhere.

In 1856, John Ruskin made an extraordinary confession. This high Victorian aesthete, more at home among the vaulted cloisters of a Gothic cathedral or the masters of Renaissance painting, wrote in middle age:

‘Of all things, living or lifeless, upon this strange earth, there is but one which, having reached the mid-term of appointed human endurance on it, I still regard with unmitigated amazement… Flowers open, and stars rise, and it seems to me they could have done no less… But one object there is still, which I never pass without the renewed wonder of childhood, and that is the bow of a Boat.’

Like Dodds, Ruskin recognized the perfection of a boat’s shape, the life-giving union of form and function. He saw its apogee in the front end – the bringing-in of planks at the stem. In that detail is the core of the task: the diverting of natural materials into curves and containment. The bow must be sharp to cut through the water, but the boards must spread back from it, filling out to create volume, and they must do so in such a way that copes with the ever-shifting bumps and thrusts of the water. If it looks beautiful, that is only a measure of its rightness.

But a boat’s bow is more than just shape. ‘No other work of human hands,’ continued Ruskin, ‘ever gained so much.’ Over the centuries, boats have acted as the engine of human endeavour, hidden away beneath the bottom-boards of history. Look around you – how much has been brought by sea? On island Britain, boat-building always meant connecting – or re-connecting – with the world and its peoples. While some vessels put to sea to do ill – carrying slaves, subjugating nations or making war – a great many more were involved in the intermingling of people, in the fertile exchange of goods and ideas, in the invigorating flow of migration and emigration. ‘The nails that fasten together the boat’s bow,’ Ruskin concluded, ‘are the rivets of the fellowship of the world.’