“…. these works transmit, again and again, the feeling of a first impression: they vary and shift but reveal no depth; a surface freshness seems to be constantly renewed before our eyes. The paint often seems to be pushing forward and outwards from the centre of the canvas. In some of the pieces this process is strenuous, muscular, more conflicted; [in others] there is a kind of grace to this interplay, with some paint pushing and some paint yielding; paint making way for more paint.”  Beau Hopkins 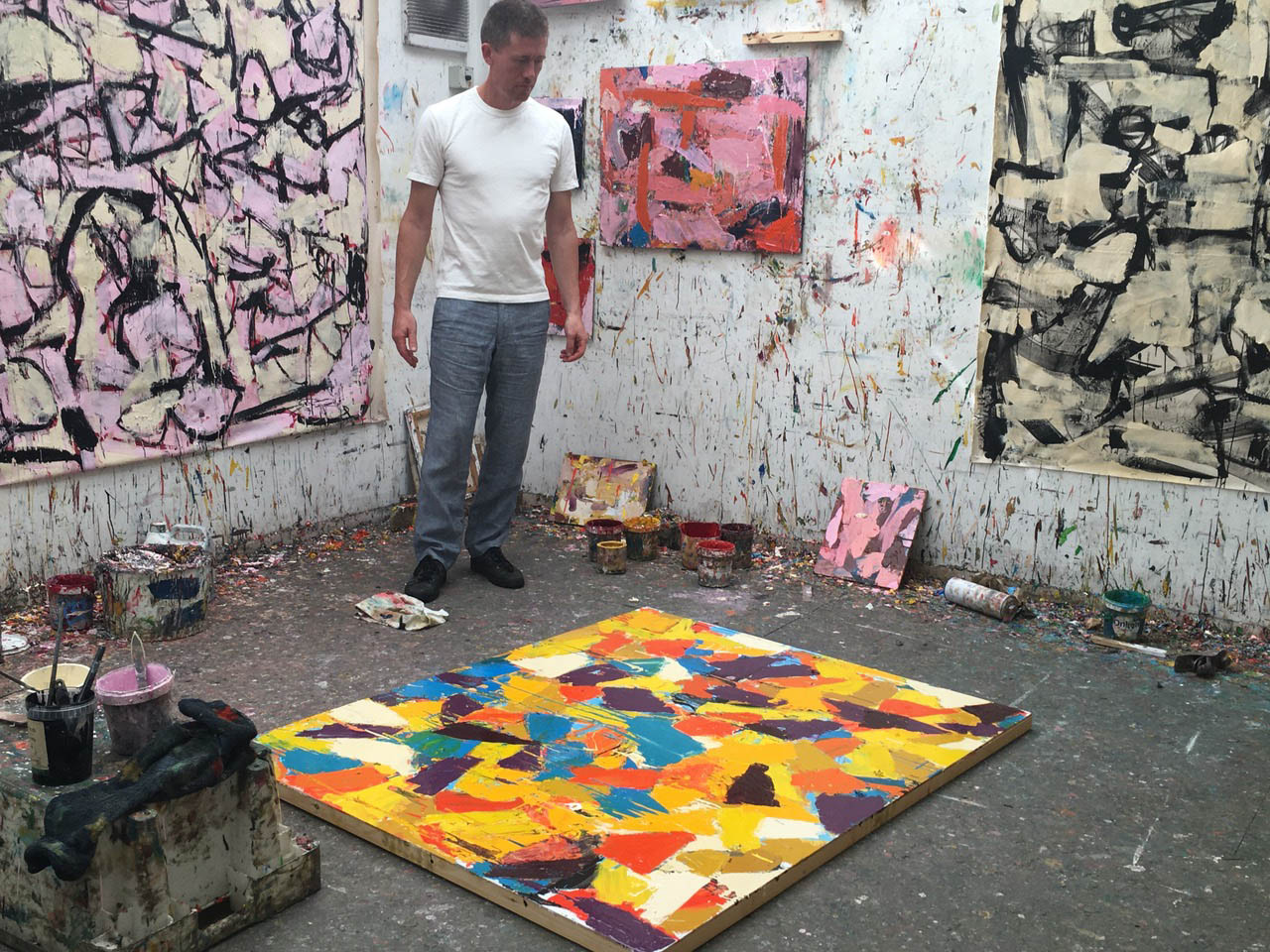 Tom Robinson lives in Norfolk, England.  His work space is a large garage-turned-studio without windows where light is drawn through opaque panes of glass in the ceiling.  The work in progress is hung on each of the four walls surrounding the artist, creating an intense if sometimes claustrophobic atmosphere.  The arrangement allows the paintings to speak to each other across the room and for different bodies of work – small and very large paintings; paintings on panel and canvas; paintings in vivid colour and in black and white – to proceed in concert.

Robinson describes his work as ‘reaching for something beyond the surface: the meta image’.  His process is rooted in an intuitive approach in which formal elements are manipulated until an image emerges, hovering between stability and the possibility of a further realisation.  It is an instinctive yet considered way of working. The paintings start from an inchoate impulse to use a particular colour, movement or tone and, through the process of adding and subtracting, go on to establish a structure and colour key.  Robinson places great importance in taking colour off the surface, as well as in applying paint.  His understanding of colour is subtle and often surprising. The forms move against each other: coming forwards and receding to create space, and giving the surfaces a three-dimensionality akin to relief sculpture.  His paintings often feel compact, elevating rather than mitigating the tension and visceral energy of the fluid paint.  One is left with the impression of complex, rhythmic planes of colour that generate light.

Robinson’s influences are myriad and eclectic and include literary and musical sources as well as the plastic arts.  He first found the Greek and Assyrian reliefs in the British Museum as a student in London, igniting an interest that has shaped his understanding of rhythm and surface since. The overlapping forms and the particular perspective found in classical relief panels are tangible markers central to his paintings.

Robinson attended The Byam Shaw and The Royal Drawing School in London. He lives and works in Norfolk.  He was shortlisted for the the Gilchrist Fisher award in 2010 and the Contemporary British Painting Prize in 2021.

SOMETHING FROM NOTHING: THE PAINTING OF TOM ROBINSON by Beau Hopkins

The artist today starts with nothing. Everything must be cobbled from scratch. The tradition is a numinous scrapyard, furnishing indispensable raw materials. But the questions that afflict the urge to make – where to begin? how to begin? why to begin? – can only be assuaged in doing.

This all-from-scratch condition, though a cliché, is striking and peculiar for the way it tends to foreground that original drive, to make. Without its restlessness, nothing holds; anything is possible. With it, only certain things are: then you have struggle and beginning. One reason why so much painting of the last century sought to isolate and amplify stark essentials in line, colour and form, was to bring that initiatory urge closer to the surface. When we encounter it, we don’t encounter some private quirk of intention; we encounter something impersonal, even primitive; not a personal energy of the artist, although often intricated with their doubt and probing; but the energy of something emerging, where before there was nothing.

That urge is palpable in Tom Robinson’s paintings here. I think it also explains why these eworks transmit, again and again, the feeling of a first impression: they vary and shift but reveal no depth; a surface freshness seems to be constantly renewed before our eyes. The paint often seems to be pushing forward and outwards from the centre of the canvas. In some of the pieces this process is strenuous, muscular, more conflicted; in the most complete and resolved ones – like ‘Red Day’ – there is a kind of grace to this interplay, with some paint pushing and some paint yielding; paint making way for more paint. In ‘Swimming’ or ‘And then’, or ‘Bollycosh’, the stretchy, fleshy strokes tilt and dip and nudge each other. Their pulse is clotted and breezy at once. As if their marks were still adjusting to some initial strong eruption through the picture plane, whose effects, like a tiny Big Bang, are working themselves out before our eyes.

Walking in the Pyrenees a few years ago, I witnessed the spontaneous formation of a cloud over a mountain lake. It was a hot day. The lakewater was ice cold. Shortly after I swam in it, the surface temperature reached evaporation point and a cloud began condensing over the water. At first the size of a sheep’s fleece, it rapidly expanded. After two or three minutes, where before there’d been nothing but blue clear air a huge cumular vapour hovered, as abrupt and massive as revelation. These paintings have the air of having undergone a similar kind of emergence. Through the paint, out of the paint. David Sylvester said of Pollock that his ‘marks are most telling when seen as traces of their making.’ Here the marks are traces of the urge to make, to drag something out of nothing.

In several works I detect a more specific movement connected to this initial eruption; a specific channeling and opening of energy. A kind of tipping or slipping, or subsidence, becomes discernible. In ‘March’, the slabs of pink are gently tumbled, driving weight and pressure into the bottom half of the canvas, like a sediment of monoliths in a vast jar of water. In ‘Sloper’, the subsidence draws the clutter of shapes down and left; at the same time that movement is held and resisted by its heavy horizontal base, a tension emphasised by the preponderance of the backward L-shapes. Though the succulent and fatty horizontals of ‘Swimming’ predominate, there’s a similar diagonal trickle of momentum to the bottom left corner. The subsidence is both slacker and heavier in ‘Duner’. Here the painting swags and hefts a softer, more evasive weight, improbably cupped by the delicate curving black lines. It seems to dramatise, not the effort, but the force needed to hold up something heavy and slipping like sand; like trying to lift an untethered hammock filled with grain. And yet it also has a kind precarious effortlessness. Even a more balanced composition, ‘And then’, holds out the sense of having lurched abruptly into a poise it will just as quickly lose. It’s jaunty, almost slapstick, a formal quality which characterises the pied and humming works ‘Stilletos’, ‘Bollycosh’ and ‘Fingerbib’, and especially ‘It goes up, it comes down’, whose meaty pinks and raw reds rub and brush together in a jumbled raunchiness. By contrast, ‘Modelling’ is lighter, more aerated. Here the release of energy is not a shifting in the weight of colour or stroke; it’s a glimpsing through rents and gashes. A diffusion, a spreading.

A similar dynamic animates what I take to be the finest painting here, ‘Red day’. It’s a work of immense energy, simultaneously a prising-apart and a yielding. A simple and unified field that also pulls and stretches away from itself. At the many vertical-horizontal axis points we can feel the reds, pinks and pallid yellows clench and release each other. It’s both visceral and serene; it sucks at your awareness and seems to push it back at once. And it plays out a kind of subtle entropy. The thing feels like something falling while being held up. Everything is sliding away, escaping to the corners, yet held somehow, concentrated somehow. Its increased airiness seems to allow for increased movement, which in turn feels more autonomous, and freer from compositional direction. There is still an angle to the slipping and sliding – this time diagonally right to left; but here it seems as if that merely followed some inevitable path to a slanted centre of gravity, like rainwater grooving its way across a muddy field. The painting helps us see what is going on in almost all these paintings, which is that the emergence from inertia, from nothing, quickly becomes an attraction towards inertia. The paintings establish their own gravity, their own force of falling, which they resist, at the same time.

These centres of gravity are often diffused so the falling seems to be occurring everywhere. ‘Slipping’ has this, while ‘Dispatch’ seems to bend around a filled hole in its centre. Often the displacement channels the angle of subsidence. This is why they feel unbalanced, sloped, tumbled. Listen to the titles: ‘Sloper’, ‘Buckling’, ‘Slipping’, ‘Duner’; while ‘It comes up; it goes down’ blends gravity with eros. The subsidence is catalysed and resisted at once; and the force of falling is caught and reinfused into the work, so the dialectic of pressures can start again. This explains the push-pull feel in many of the works: it’s as if they were subject to some kind of undertow. Their shapes and colours shift, light and heavy at once, like lines of sand dragged and swayed and restlessly reformed by a strong dense energy whose presence is vivid but indirect; felt more than seen.

The strong verticals and horizontals in the paintings suggest that they emerge from landscape. Having absorbed landscape’s rows and uprights, Robinson has patterned these as energy; and this is what generates the buckling and sloping and slipping on a surface of loose, but highly charged grids. Sometimes the push-pull is fleshy and stretchy; sometimes it’s harder, more gouged and carved; sometimes zippy. But the overall grid holds and releases at once; a deliberate zone of gravity the works allow to play out. That element of play is how the paintings balance and unbalance their tensions. In fact, the spaces they create are akin to the squares of a cartoon strip. Consider ‘Buckling’ and ‘Table Service’: here the chunky, raw shapes resemble ill-fitting jigsaw pieces swollen to enormous size. Even as the paintings focus our awareness into the bold arrangement of energies and the sweet texture of the paint, they release it to the wind of wordless pleasure, a child’s pleasure, in such disorder of scale.

Just as de Kooning and Guston did, these paintings make the link between the endless energy of creation and play, and the raucous energy of comedy. Comedy not as the getting of laughs, but the principle of repetition-for-pleasure. In cartoons, life is intensively abstract, its essential features reduced to a game of watch-it-go-wrong, played out with limited variations, forever. The logic of Looney Tunes is the logic of Cervantes and A Midsummer Night’s Dream: it’s the child’s cry, ‘Do it again!’. But the logic of repetition is also the logic of biology, of procreation and renewal. The logic of the human creature, its eros, flesh, its urges. A logic that eludes gravity, the law of decline, not by heroic resistance, but by play. That secret inner impulse animates these paintings, and explains why they seem to expand when seen in sequence. Their motifs reset and repeat, as we apprehend their essential common structure.