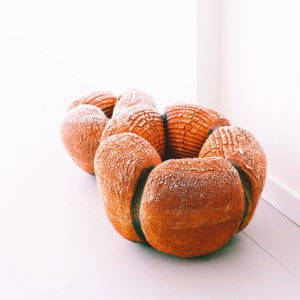 Thiébaut Chagué began his career in 1976, training in France, Belgium and in England under Michael Cardew and Richard Batterham. Returning to France in 1981 he set up his first workshop in the Loire Valley and in 1984 built a new studio in the Vosges with a wood-fired kiln.

‘I met clay at the age of eleven. In 1976, certain of my vocation, I left school to become a ceramist. I have had the privilege of being the pupil of several great potters, ceramists or sculptors whose works I admire: Owen Watson, Richard Batterham, Pierre Culot and Michael Cardew. Their unconventional teaching allowed me to become who I am today.’

Chagué creates unique wood fired stoneware sculptural pieces. In 2009 he built a giant clay sculpture which he fired in the courtyards of the Victoria & Albert Museum to mark the opening of its new Ceramics Galleries. Examples of his work can be found in many public collections across Europe in Belgium, France and Germany. He is represented in the V&A museum and has recently exhibited in the Louvre.

For this exhibition Chagué will be creating a wood-fired kiln on site for Messums Wiltshire which will be filmed in progress. Once constructed, he will fire a series of new works in the kiln and these will subsequently be shown in the exhibition alongside further works by the artist. The firing will be a dramatic spectacle whereby the act of making becomes part of the exhibition. We invite the public to watch this exciting event as it takes place.