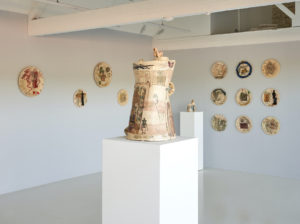 “I am interested in the history of clay…the unique way that ceramic relics and fragments communicate across the centuries, telling tales of great personalities and events, as well as the mundane rituals of daily life.”  Steve Dixon

Ceramic artist and professor Steve Dixon is also a satirist, writer, lecturer and curator. He is known mainly for his use of dark narrative and for using “illustrated ceramics pots as an unlikely platform for social commentary and political discontent.” From Renaissance paintings and British politics to pop culture, Dixon draws on a variety of sources to “challenge the status quo and inspire new ways of thinking.” Dixon tends to create busy, complex ceramics pieces, each with an intriguing message.

Steve’s work features in numerous public and private collections, including the Museum of Arts & Design, New York; the Victoria and Albert Museum; the British Council; the Crafts Council; the Royal Museum of Scotland and the Fine Arts Museums of San Francisco.

Graduating from the Royal College of Art in 1986, Stephen Dixon soon established a reputation for figurative ceramics with a biting political and social satire. As Professor of Contemporary Crafts at the Manchester Metropolitan University, and engaged as a research fellow there since 1998, he is investigating political narrative and the contemporary printed image in ceramics. Working in British tradition of satirical artists like Hogarth and Rowlandson, Dixon combines drawings of historical and current public figures with written annotations, layering the images and words to give depth and acuity to the narrative.

It was at the Royal College of Art that he fused his approach to practice with his developing political outlook:

I made a group of pre-Columbian style pieces using traditional techniques but decorated them as though they had come back to life in the 20th century and were commenting on current political issues from a leftist perspective. (It was during the Regan era and there were lots of right wing interventions going on in Central America which I felt very strongly about) . . . I had always been interested in politics but had never previously been able to work out a way to put politics into my pots. This was a big turning point and started me off as a political potter.[1]

Dixon’s work gained recognition in the USA in the early 1990s with exhibitions at Pro-Art, St. Louis (1993) Garth Clark Gallery, New York (1995) and Nancy Margolis Gallery, New York (1998). He combines his studio ceramic output with public and community projects; in 2000 he received an Arts Council ‘Year of the Artist’ award for a collaborative project with Amnesty International and Kosovan refugees. More recently, he created ‘Monopoly’, a four-metre long battleship sculpture made of 30,000 hand-made bone china flowers for the 2009 British Ceramic Biennial in Stoke-on-Trent.

Works by Dixon can be found in public collections worldwide including the Museum of Arts & Design, New York, the British Council, the Crafts Council, The Victoria and Albert Museum, San Francisco Museum of Fine Arts, The Royal Museum of Scotland, and Manchester Art Gallery.

[1] Online magazine Ideas in the making: Stephen Dixon, Maker of the Month, March 2011.

Q. How did you initiate your practice? What has been your background / training and how influential has that subsequently been?

I set up my first studio in Kings Cross, London in 1986, and was there for 5 years, initially sharing with Australian potter Prue Venables, then with Phil Eglin then Ken Eastman.

I initially trained in sculpture at Newcastle University, and then specialised in ceramics at The Royal College of Art, where I was taught by David Hamilton, Alison Britton and Eduardo Paolozzi. My time at the RCA was particularly influential, it was there that I first began to develop a political narrative in my work.

Q. Can you tell me more about the subject matter of your work?

My subject matter is varied, but always driven by the social and political issues of the time. For example, the early pieces from the RCA were a response to the issues of the nineteen eighties; the miners strike, the Falklands War and US intervention in Central America. More recent work has focussed on Brexit, the Trump presidency and the ongoing issue of migration.

Q. What are the processes involved in making your work?

My processes are also quite varied, but my work is almost always hand-built, and usually involves modelled and printed imagery. My plates are press-moulded in white earthenware, glazed, and then transfer prints are collaged and layered up through multiple firings. The prints themselves are either screen printed or laser printed onto ceramic transfer paper before they are applied.

Q. What is the inspiration behind the specific works in the exhibition and how do they sit within the context of your work to date?

This exhibition presents a retrospective view of the development of my plates over the last twenty-five years or so. The earliest pieces, such as ‘A new Crusade’ and ‘The Joker’ were inspired by ongoing events in the middle east after the first Gulf War. The images in these early plates are impressed and sprigged (low relief prints applied using plaster moulds). Other pieces, ‘Traffic’ and ‘Chained’ for example, responded to the bi-centenary of the Abolition of Slavery Bill in 2007. The ‘Alphabet’ plates are less politically driven, depicting an insider’s view of the V&A collections and archives during a residency there in 2009-2010.

Q. Who or what has been your greatest influence as an artist?

As a direct influence this would undoubtedly be Eduardo Paolozzi, whose attitude to assemblage, collage and print inspired so many of my RCA contemporaries. Less directly Robert Rauschenberg’s collages and prints have always been a point of reference for me, as well as Paula Rego’s passionate, visceral narratives, and her connection to social issues. Historically, I’m influenced by the political satirists of the eighteenth century, Hogarth and Gilray. My 2005 retrospective ‘The Sleep of Reason’ at Manchester Art Gallery paid homage to Goya, the grand master of political satire. 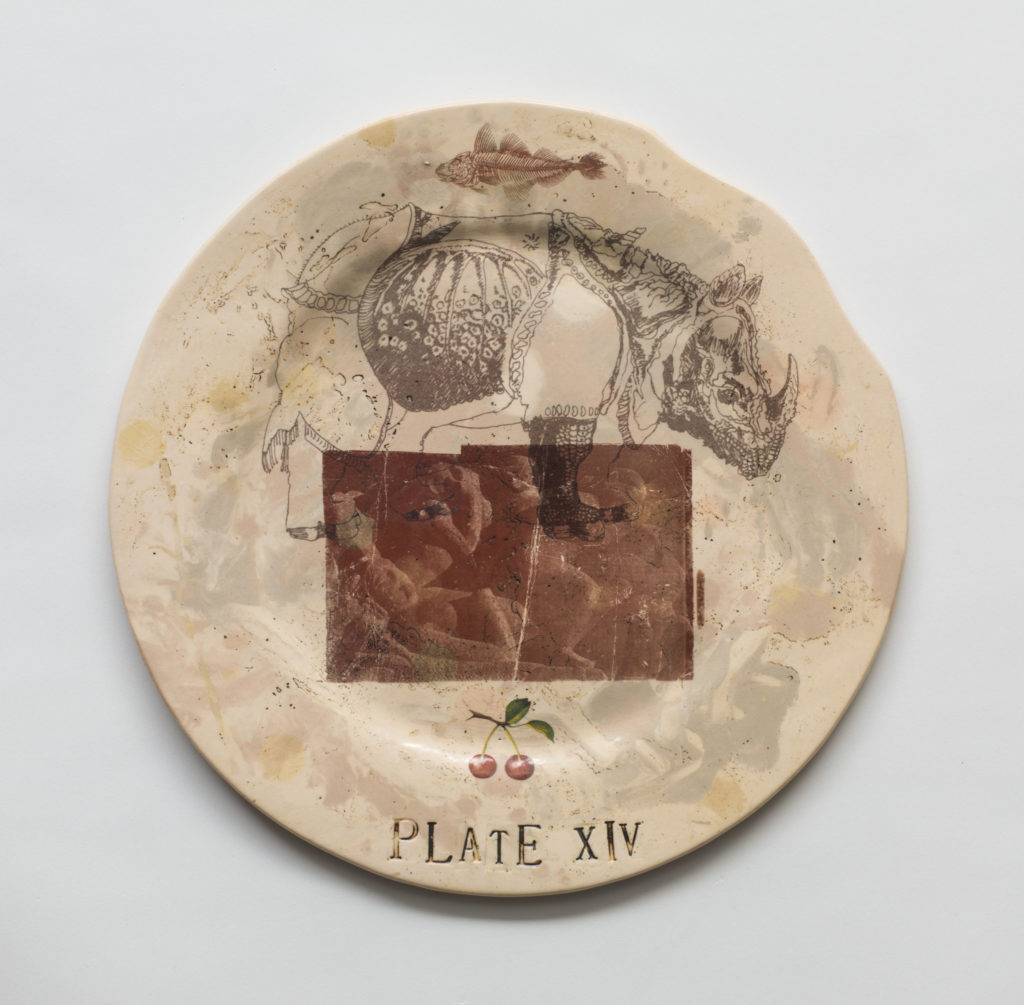 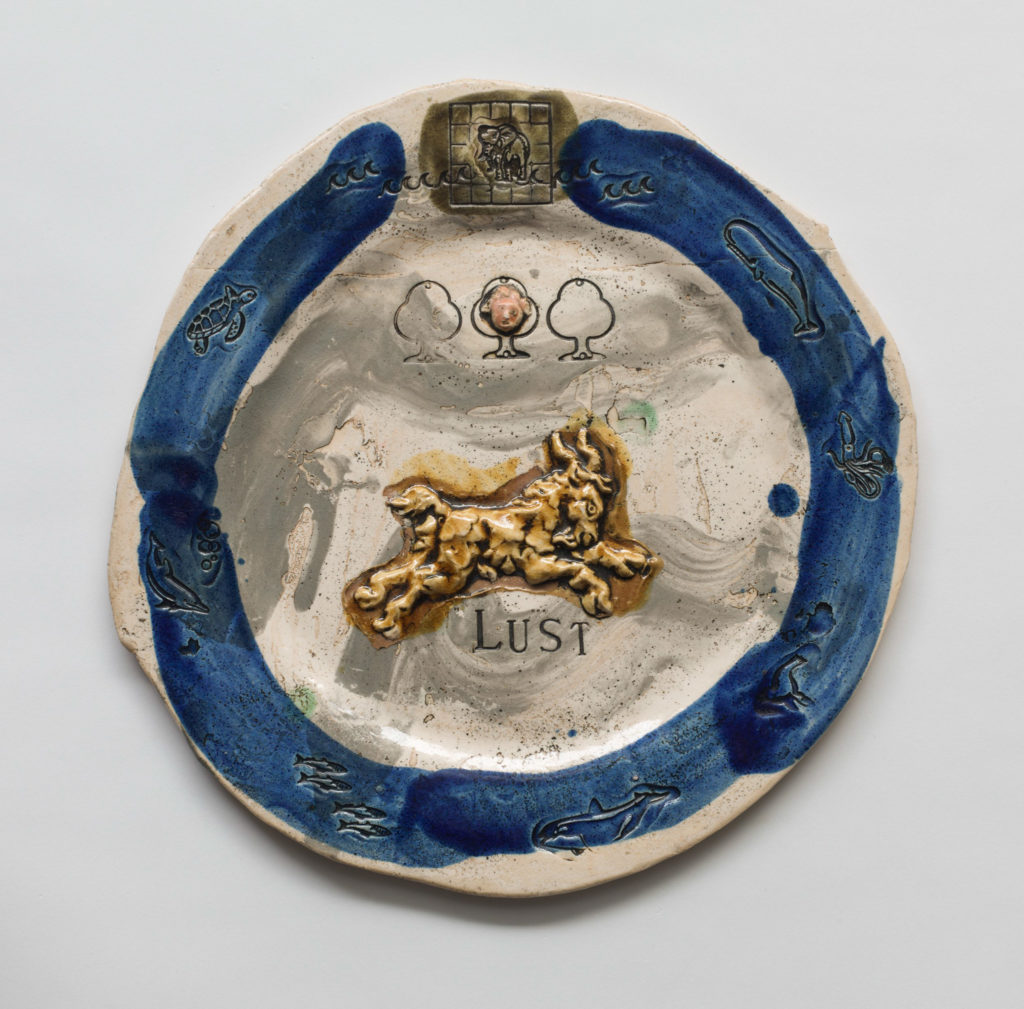 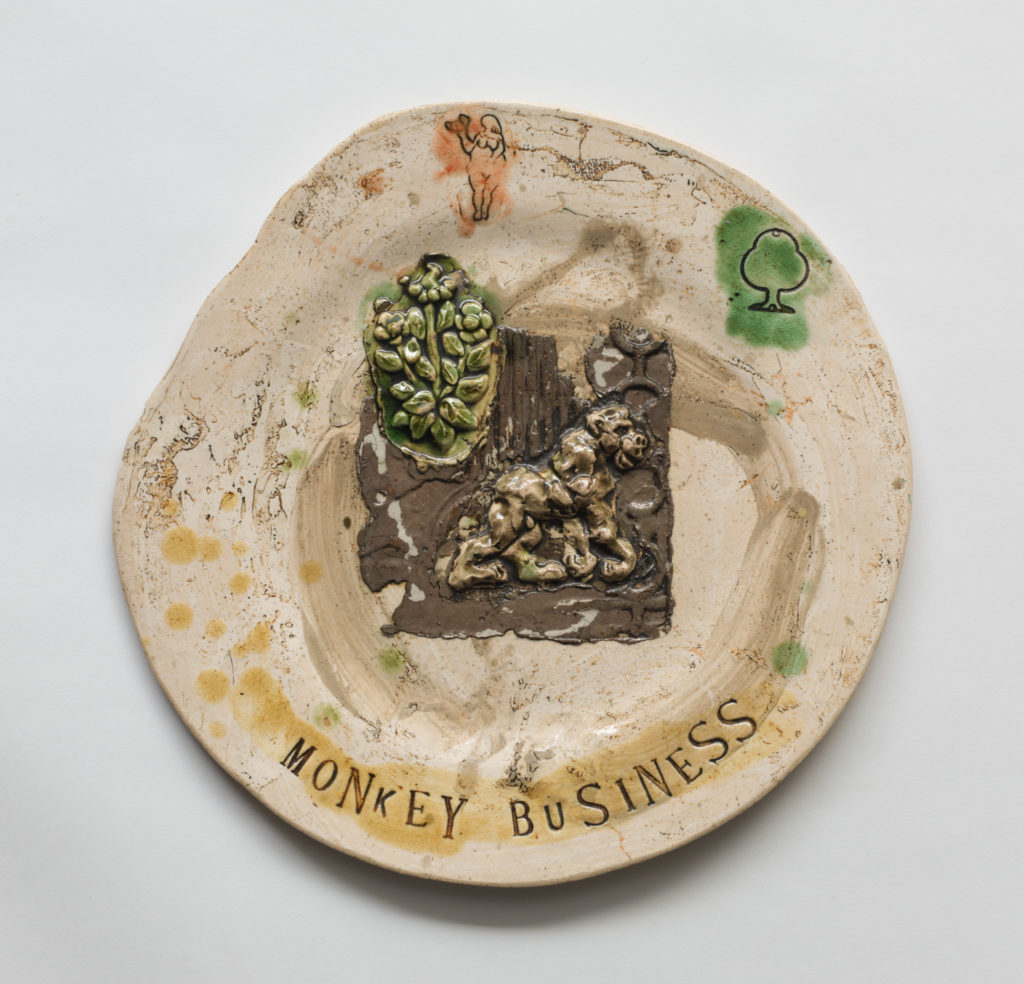 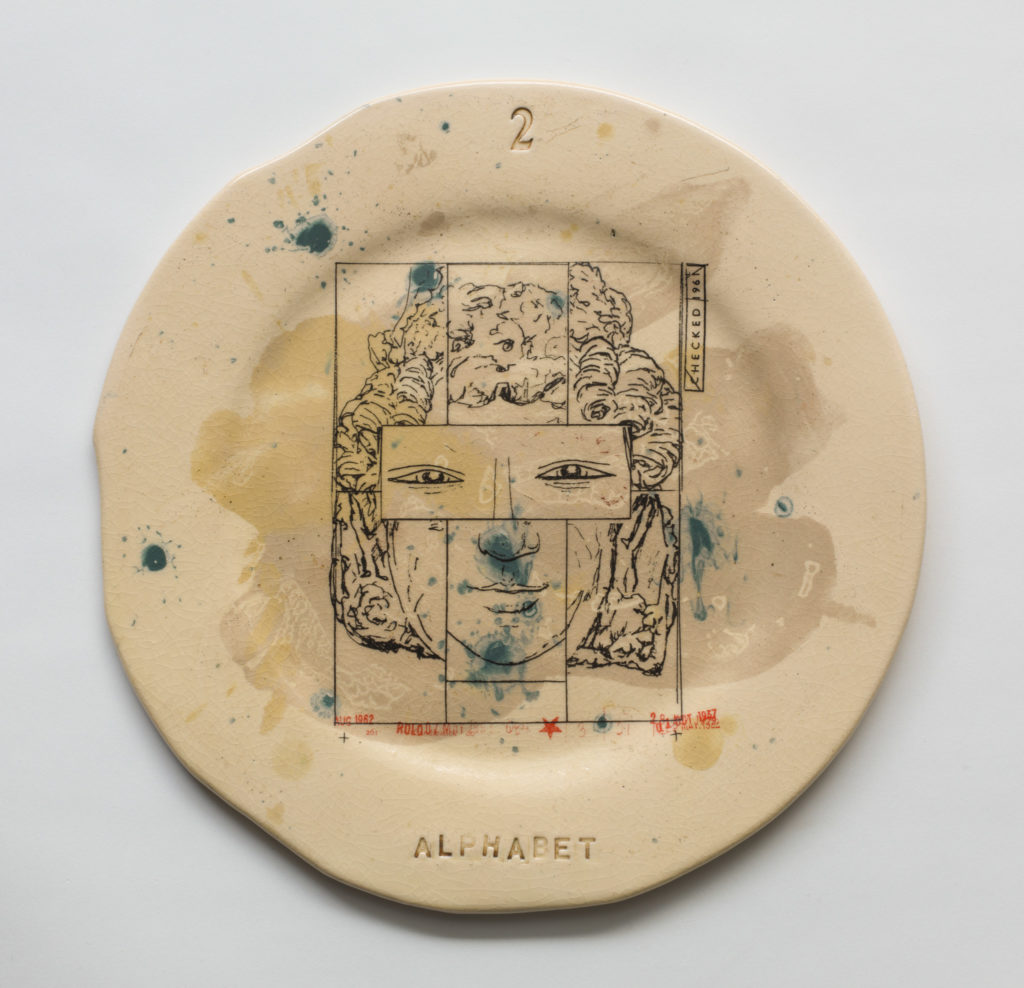 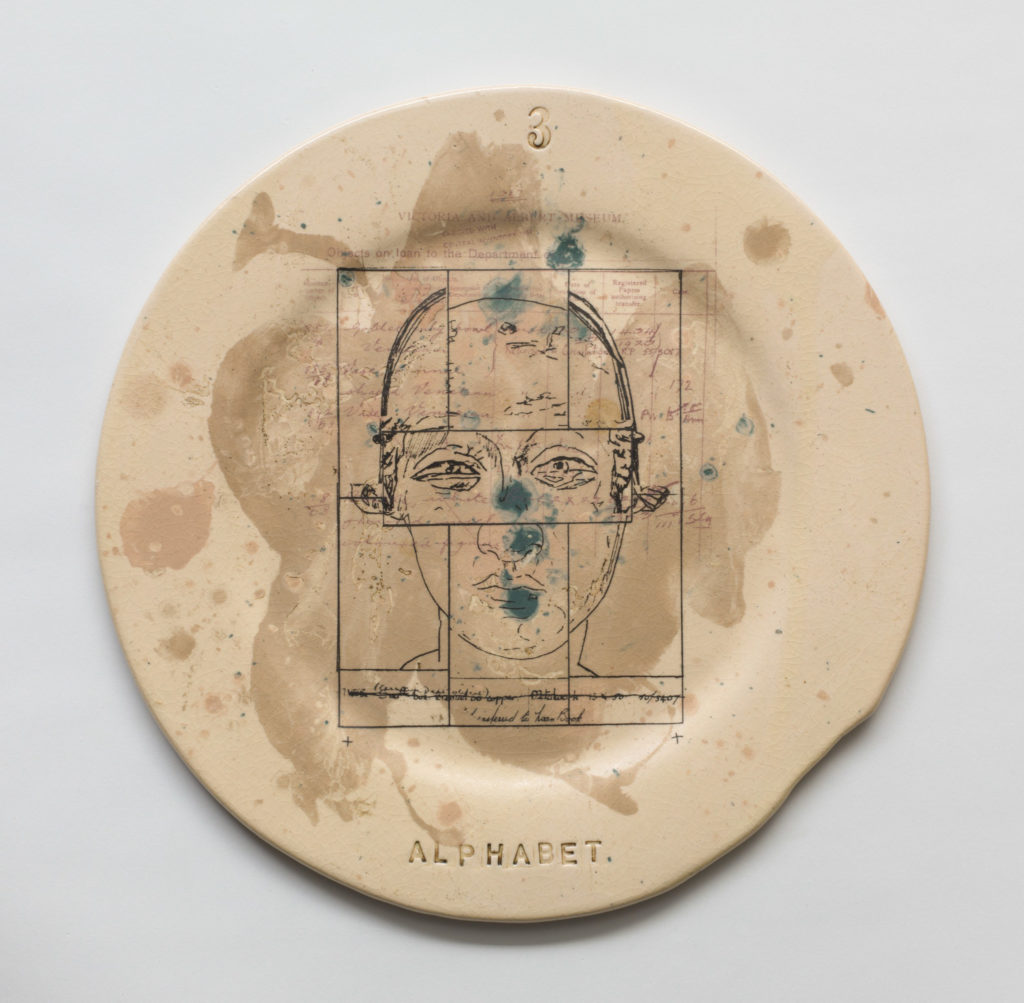 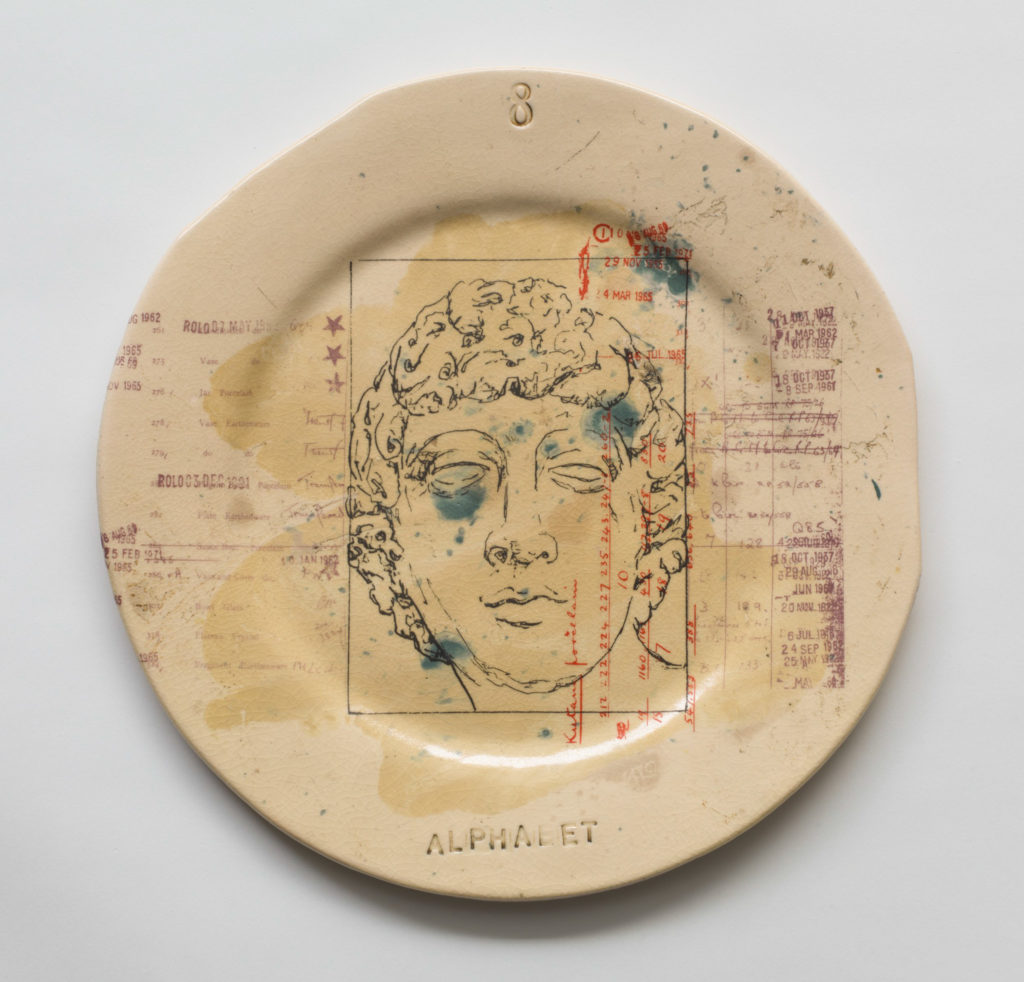 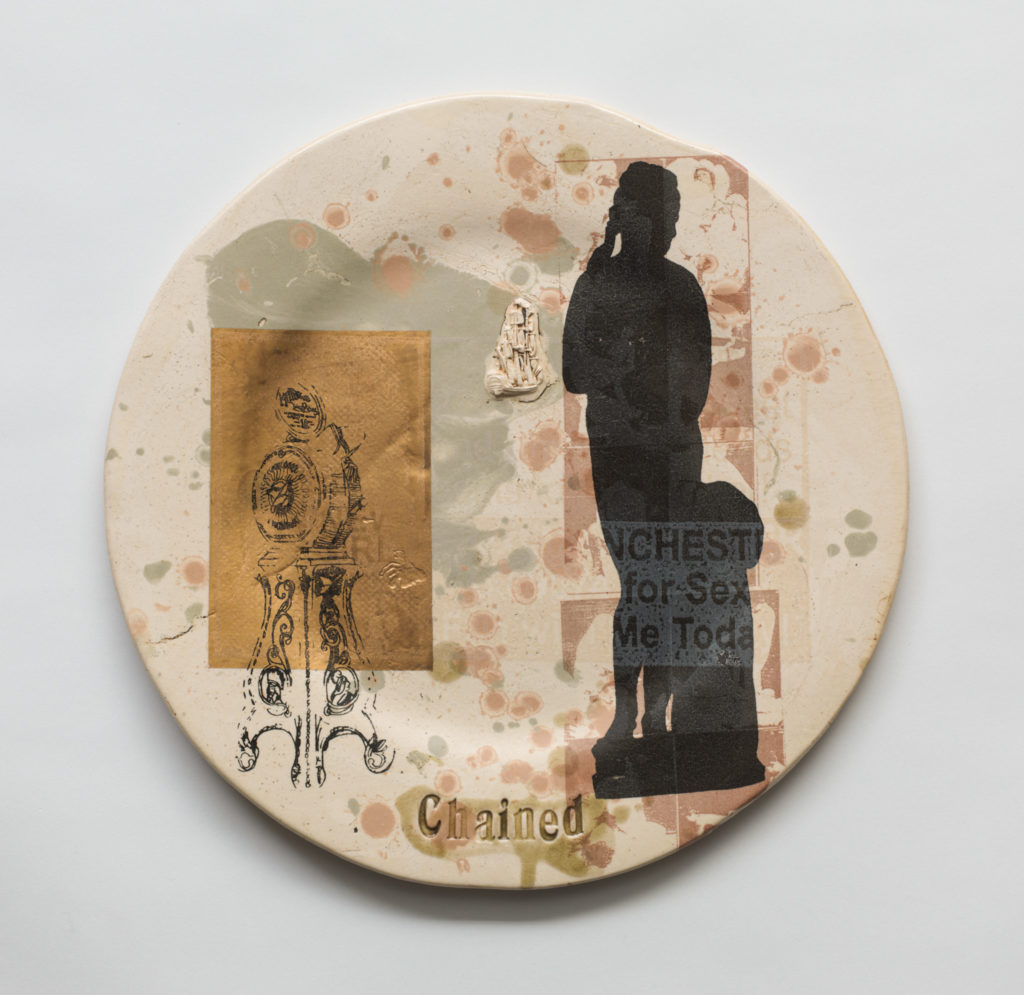 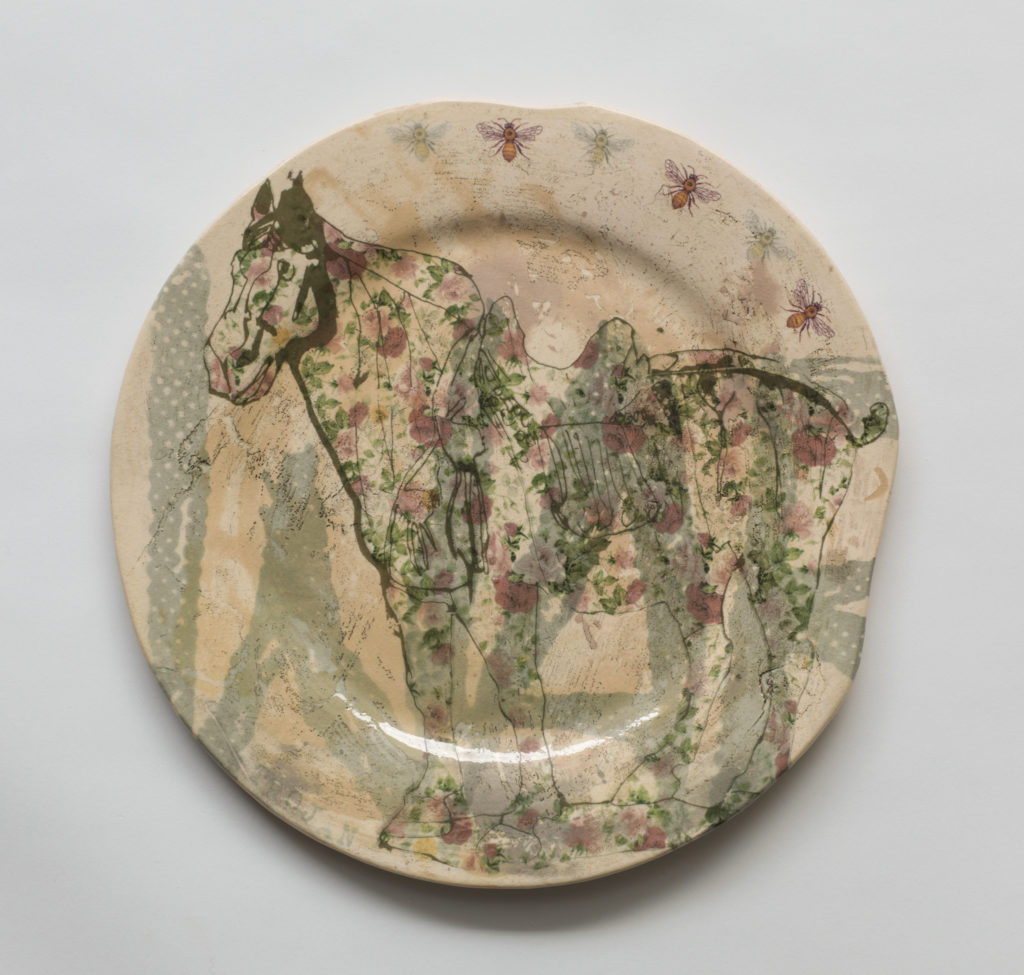 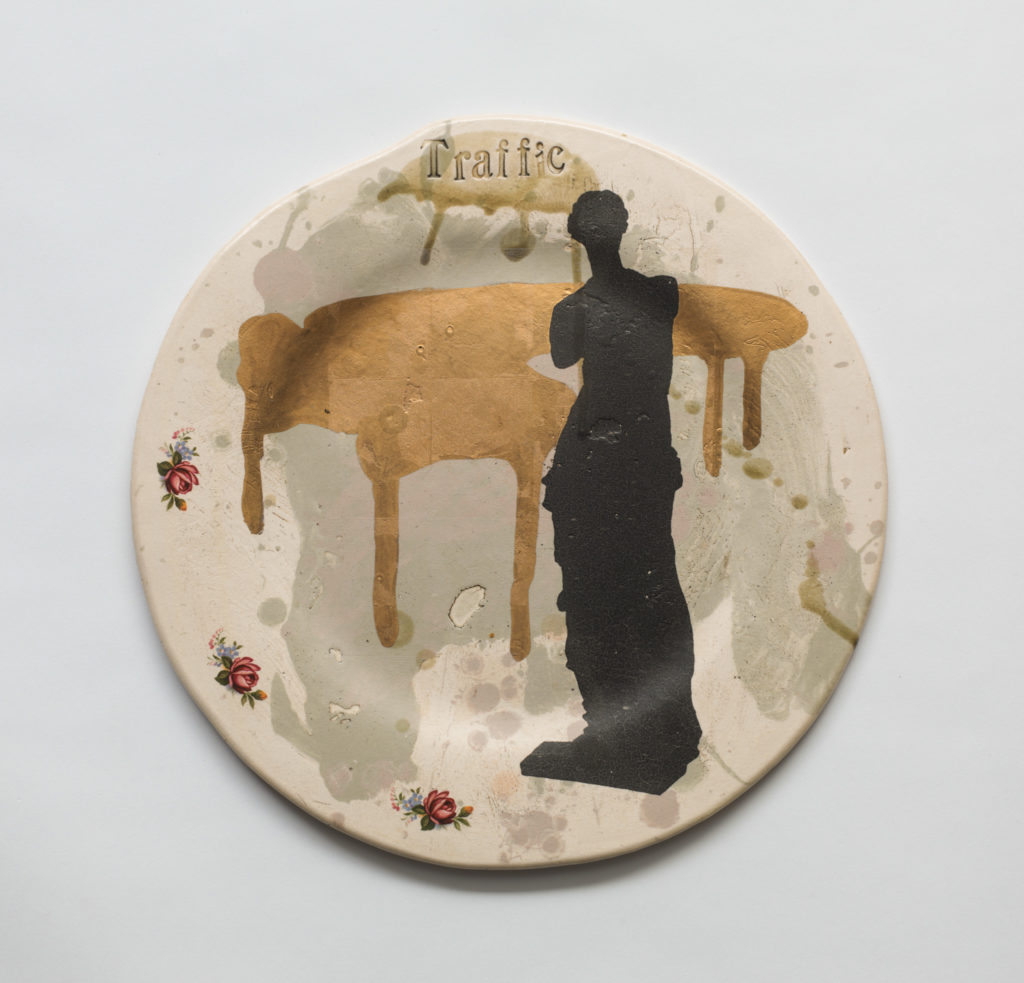 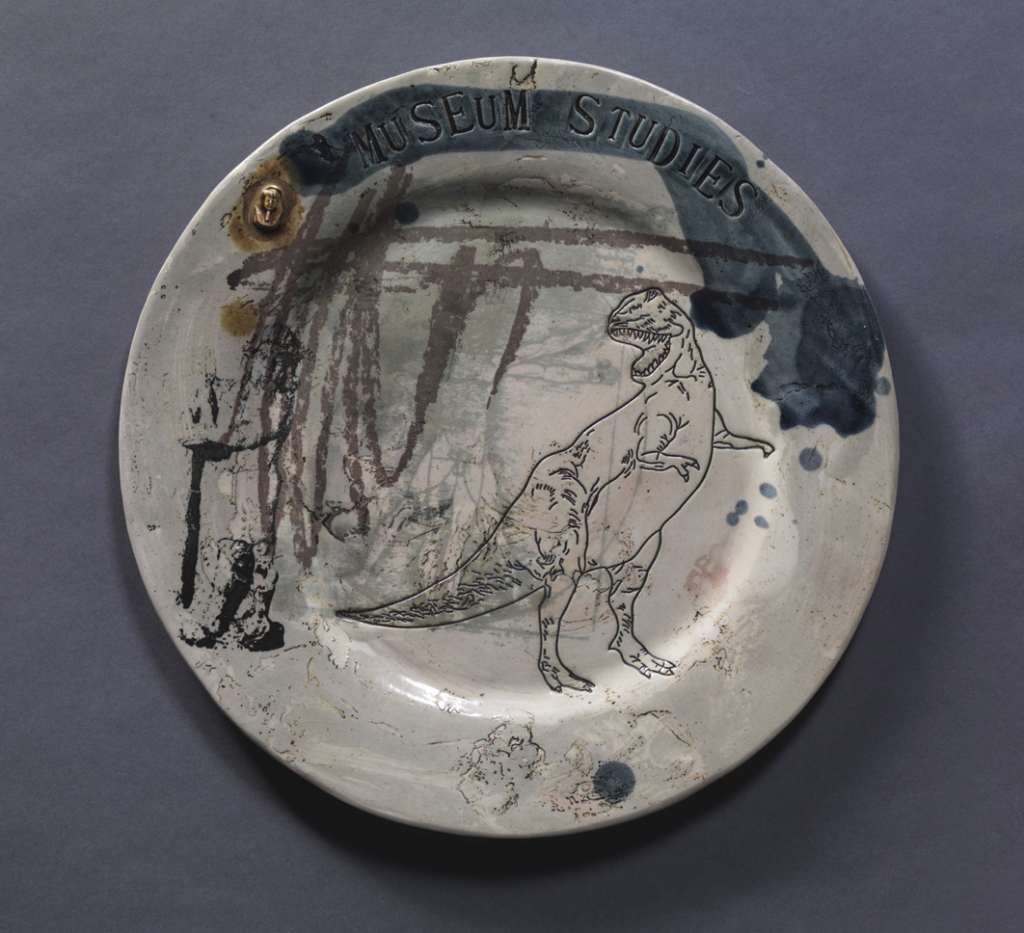 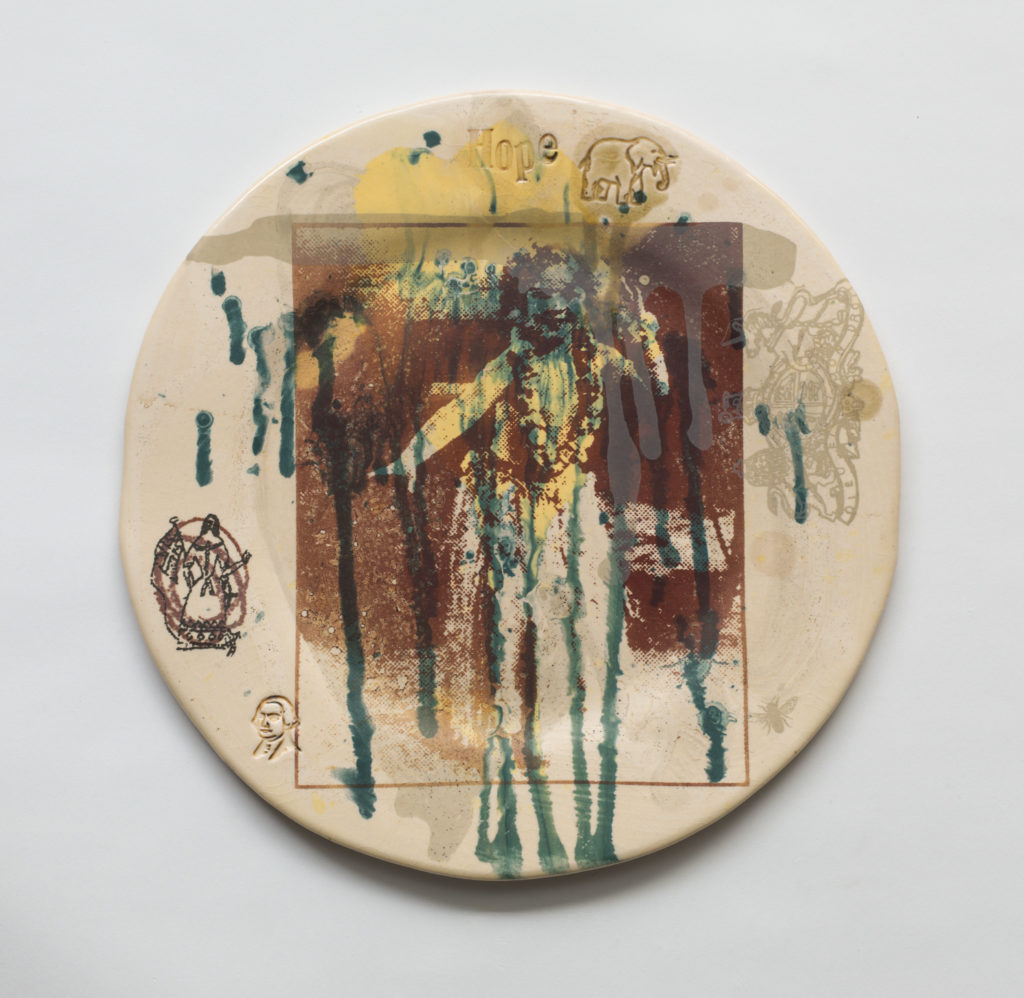 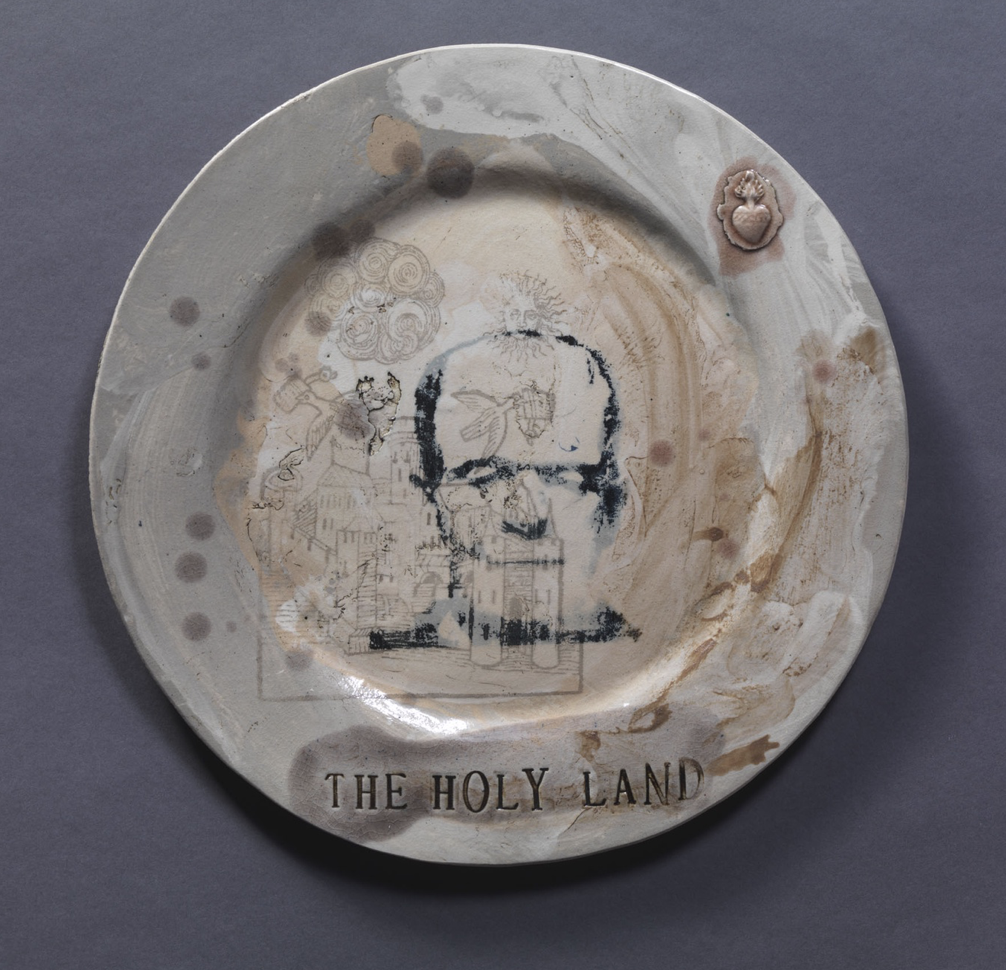 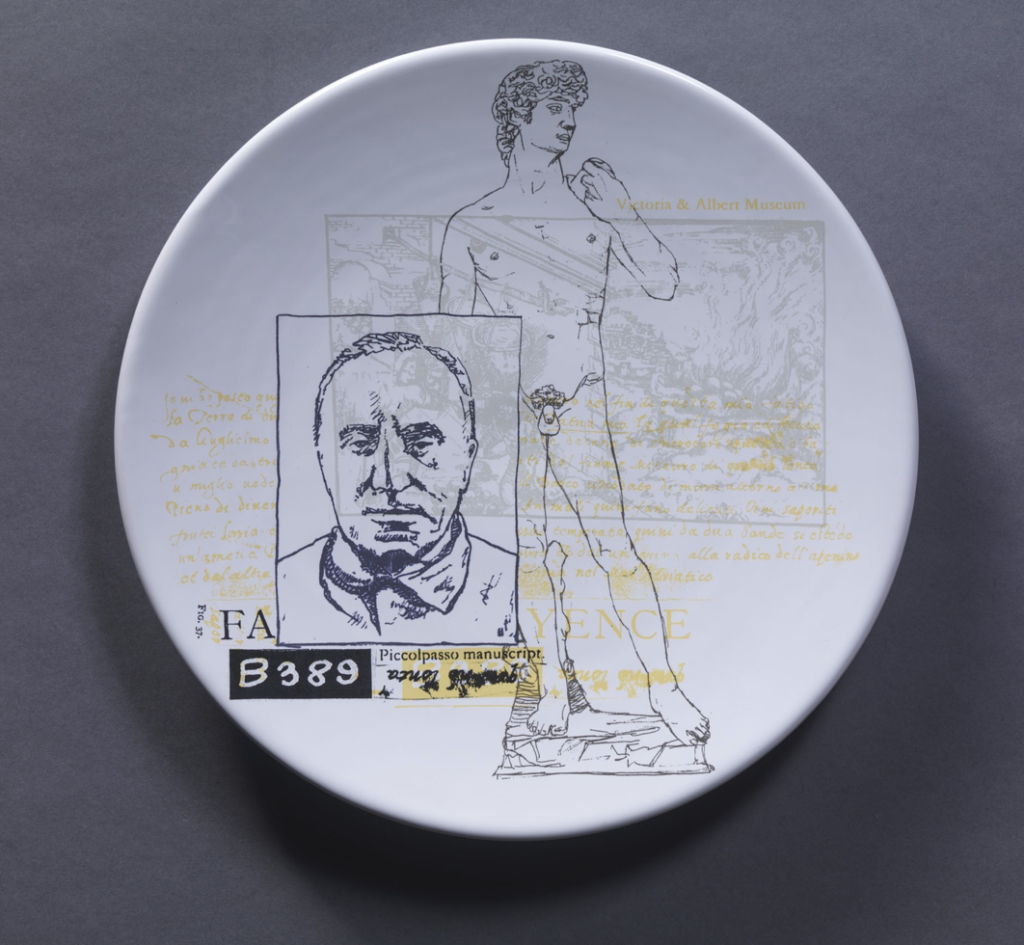 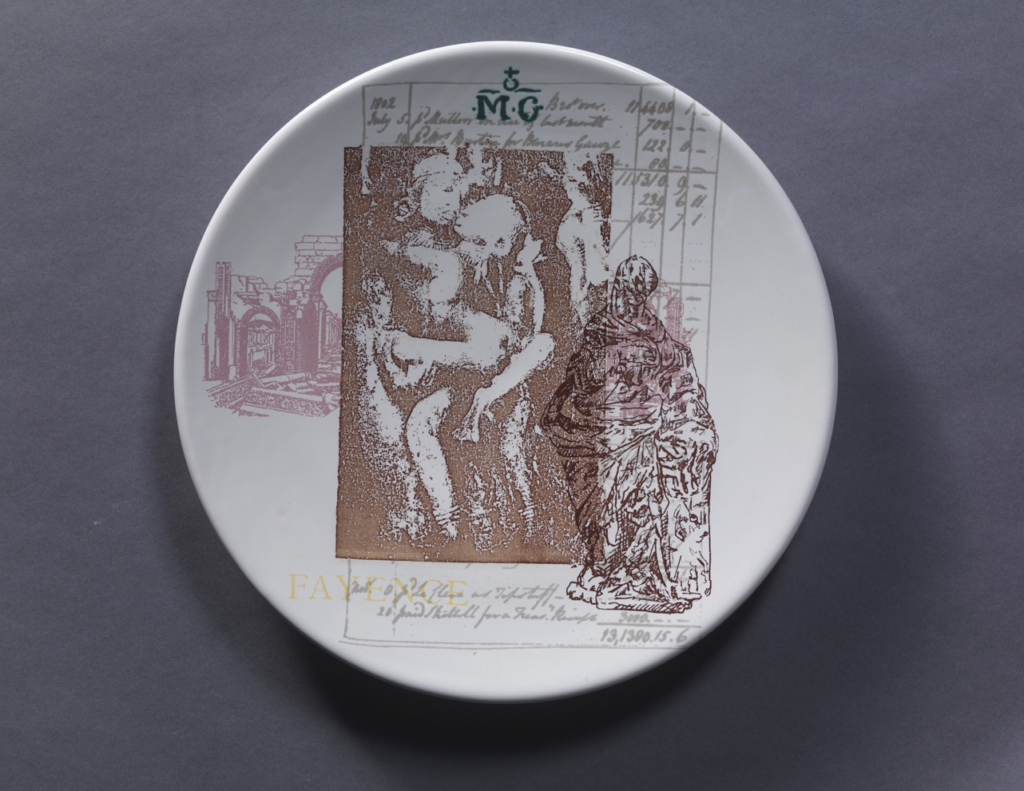 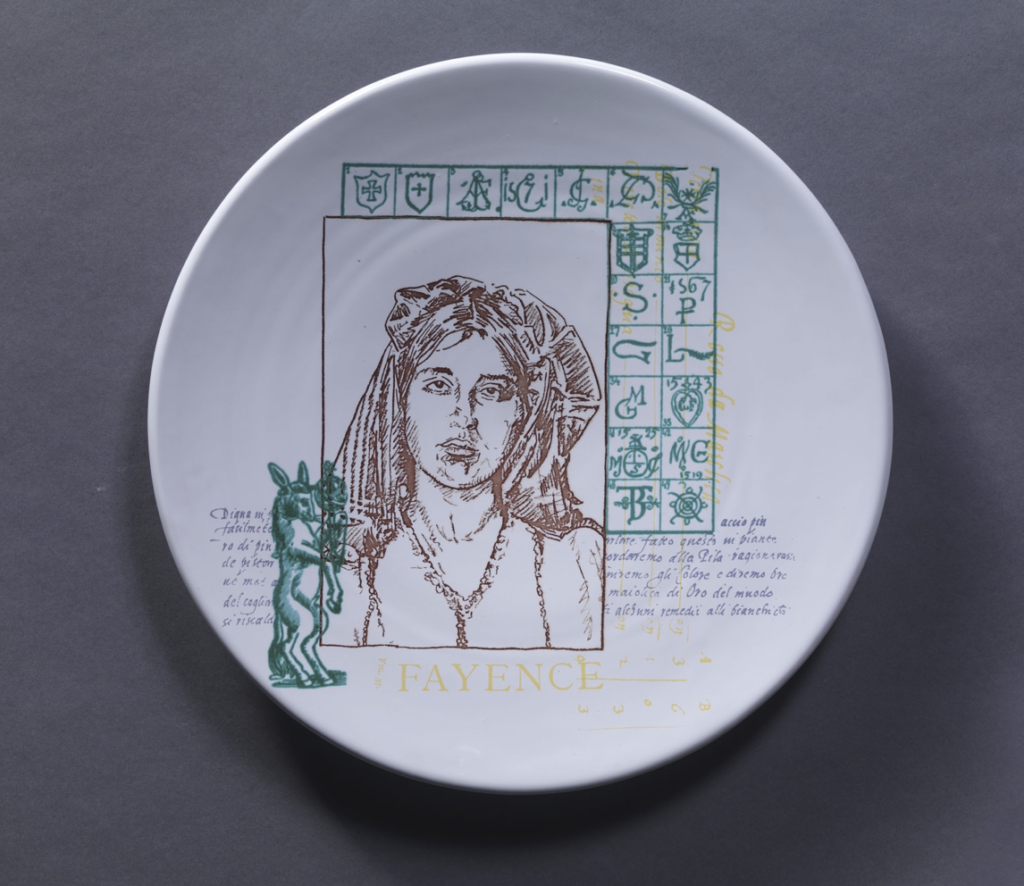 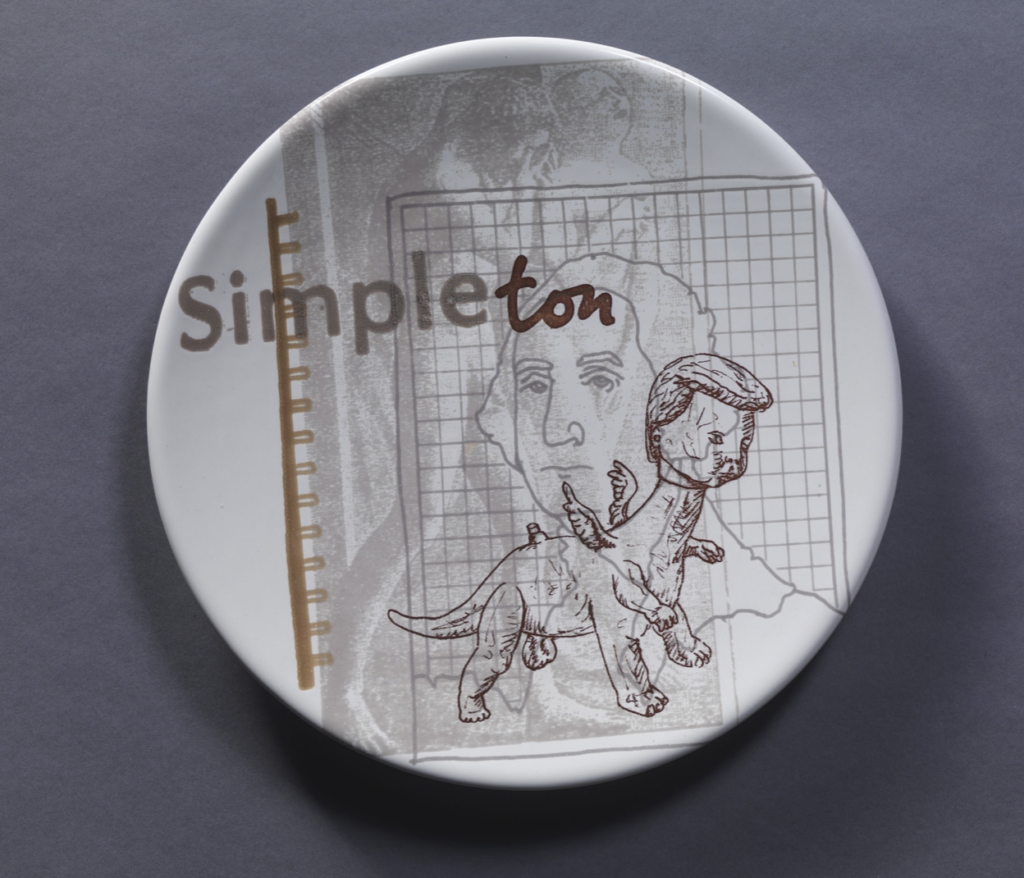 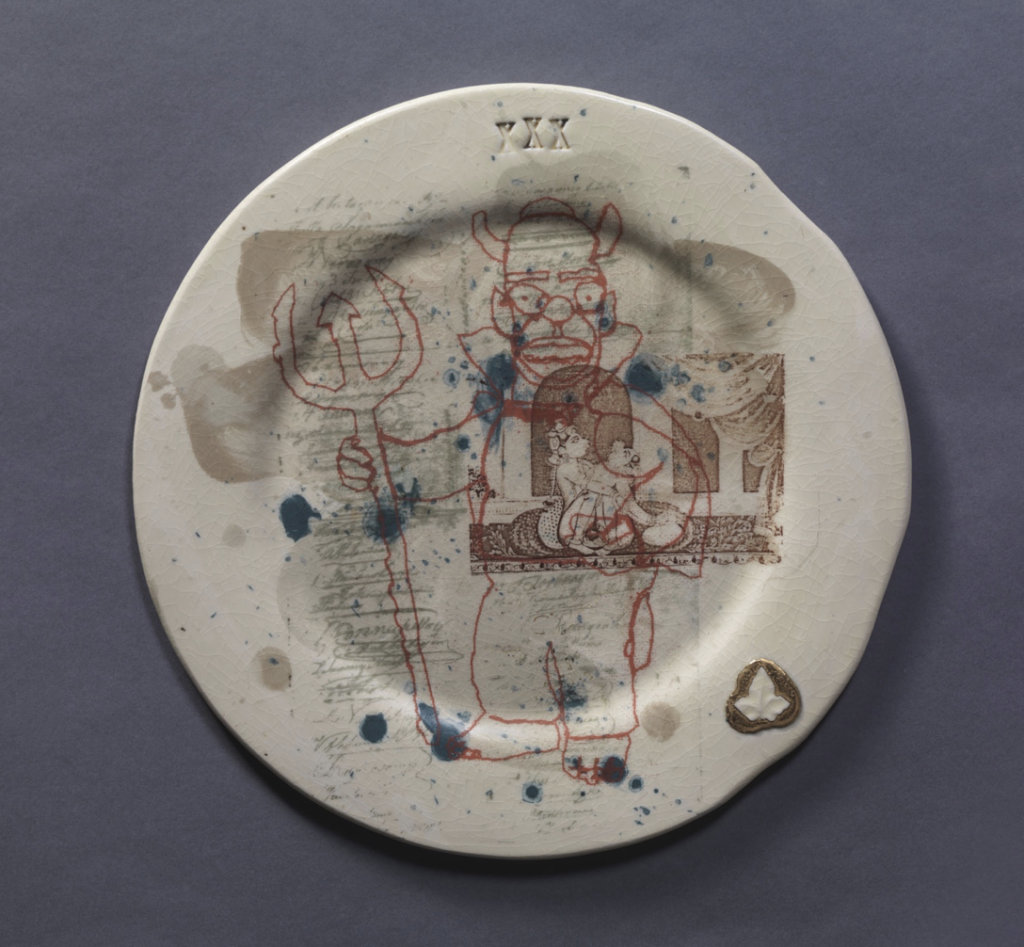 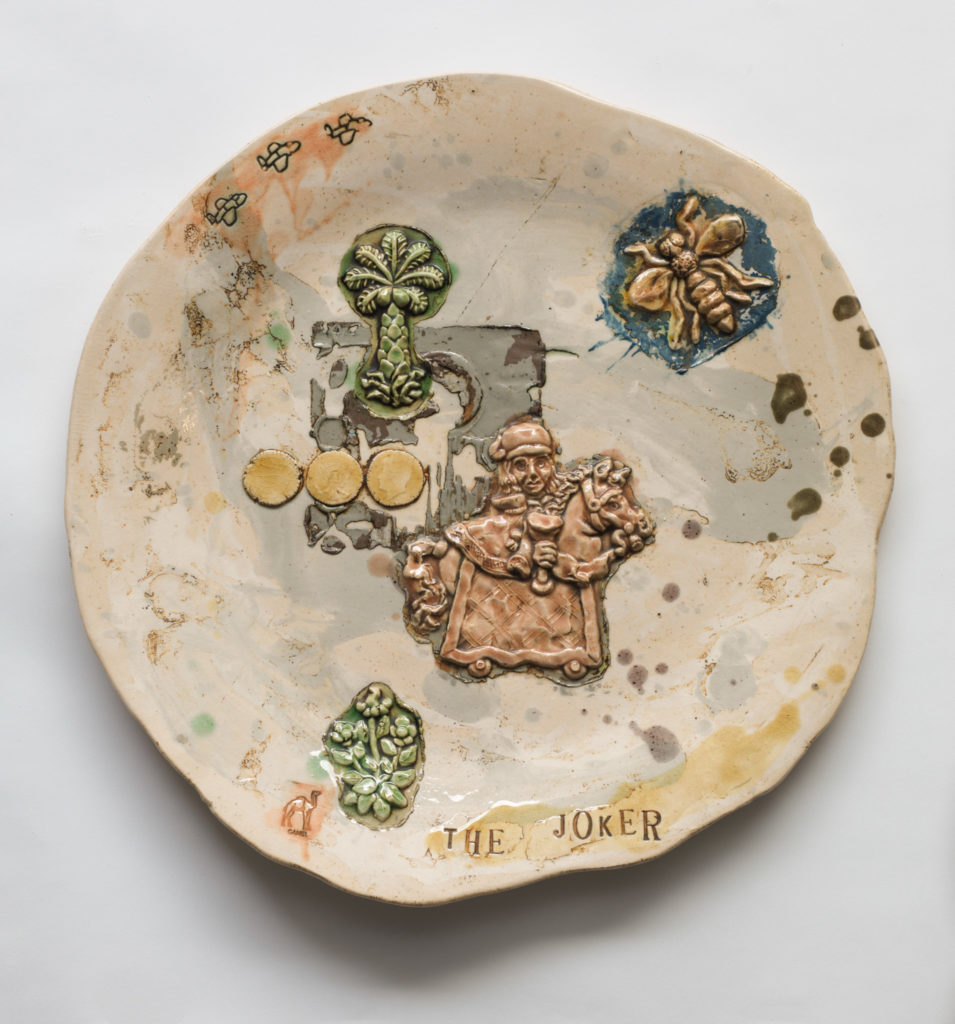 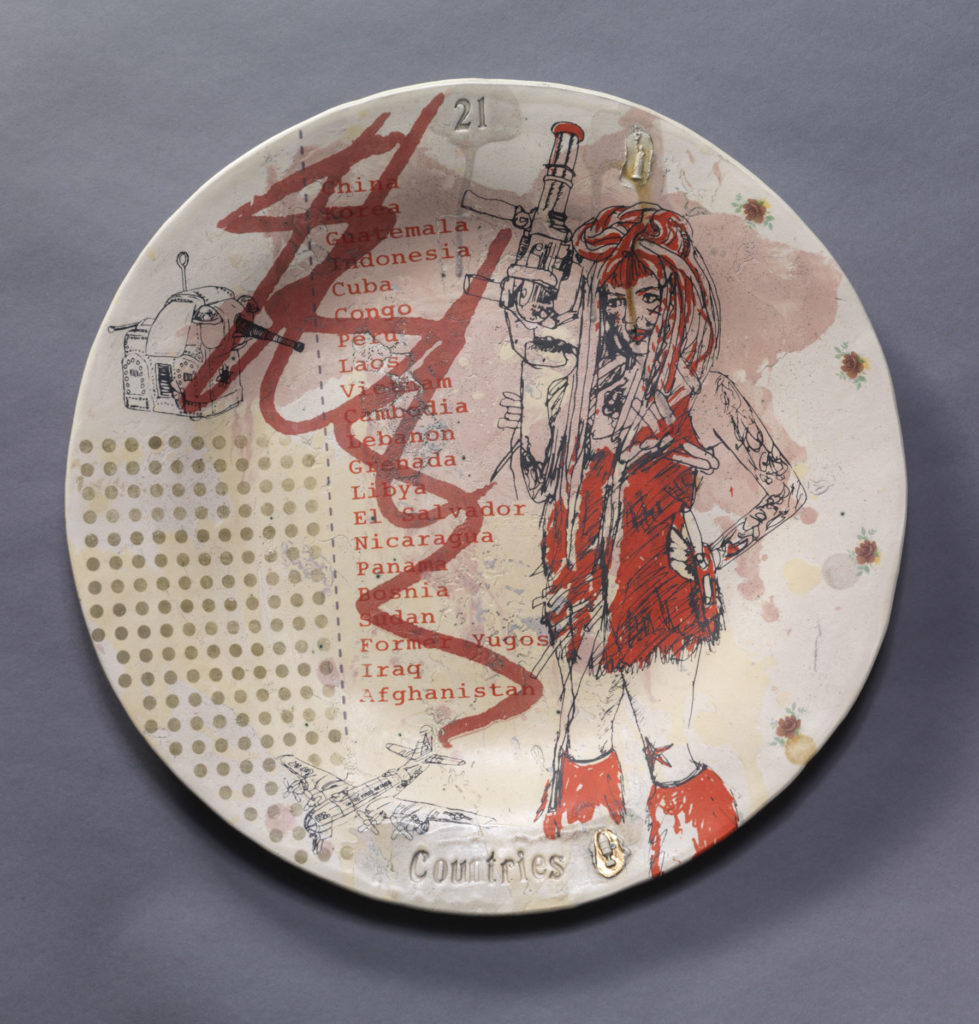 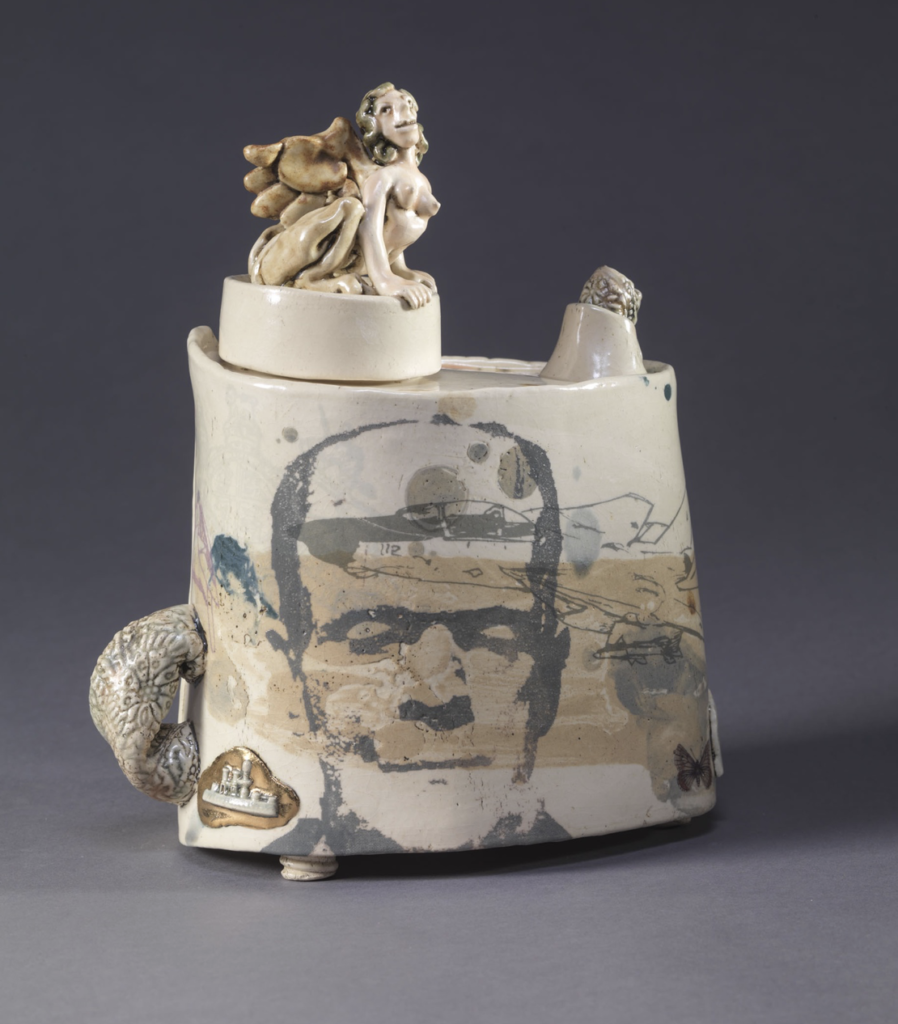 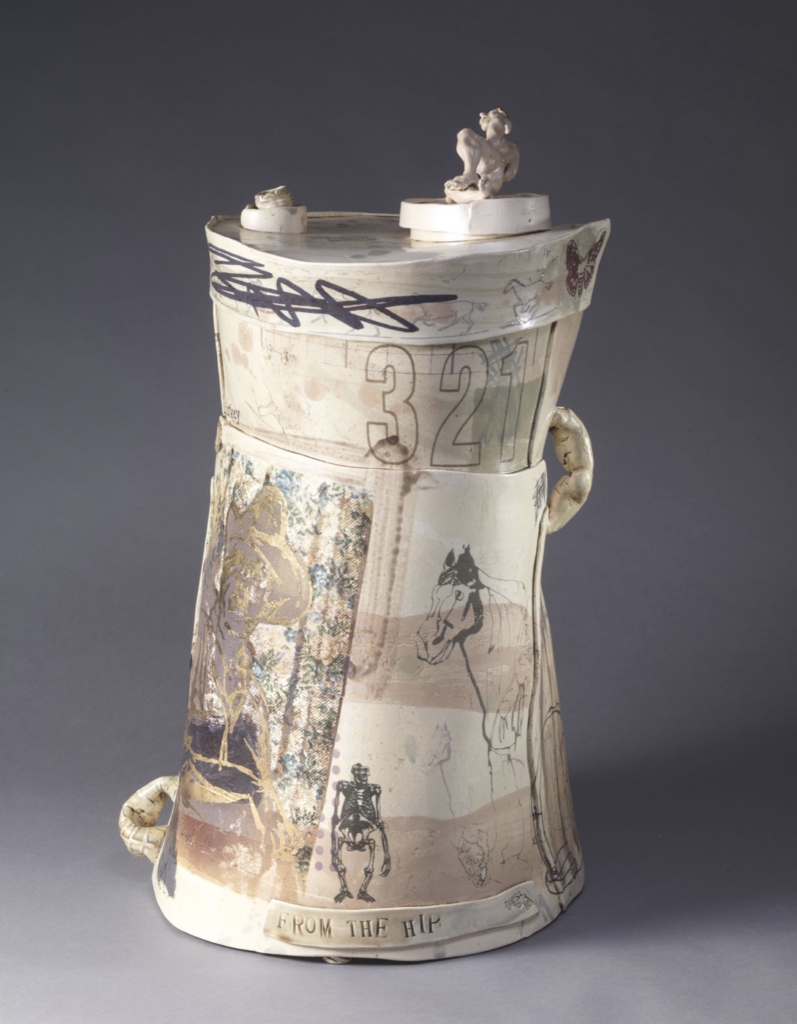 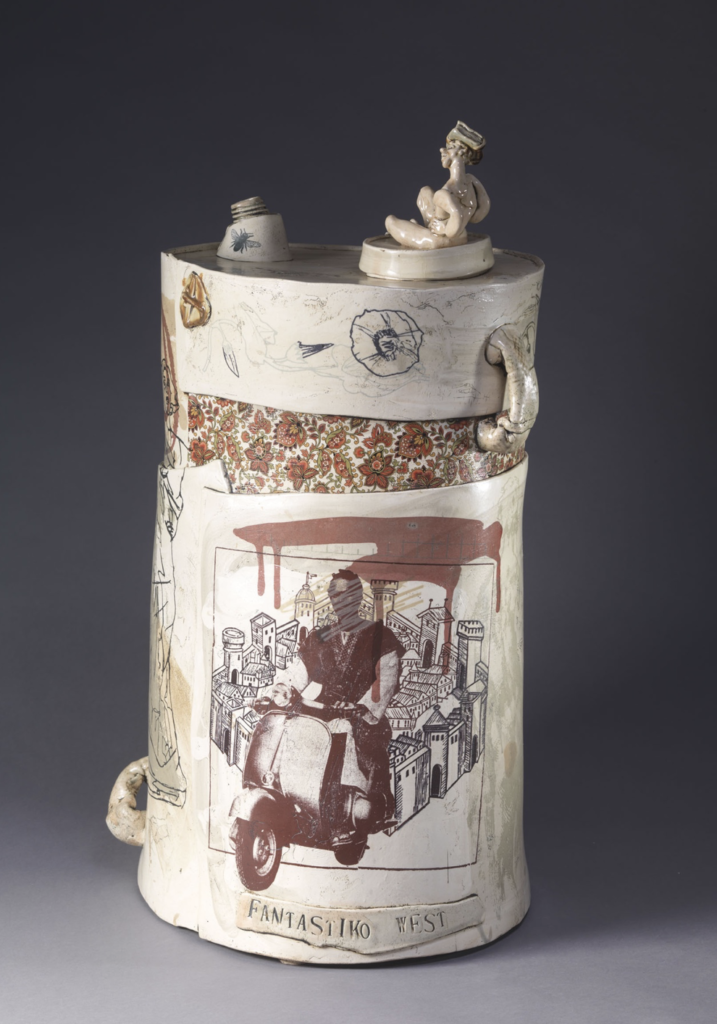 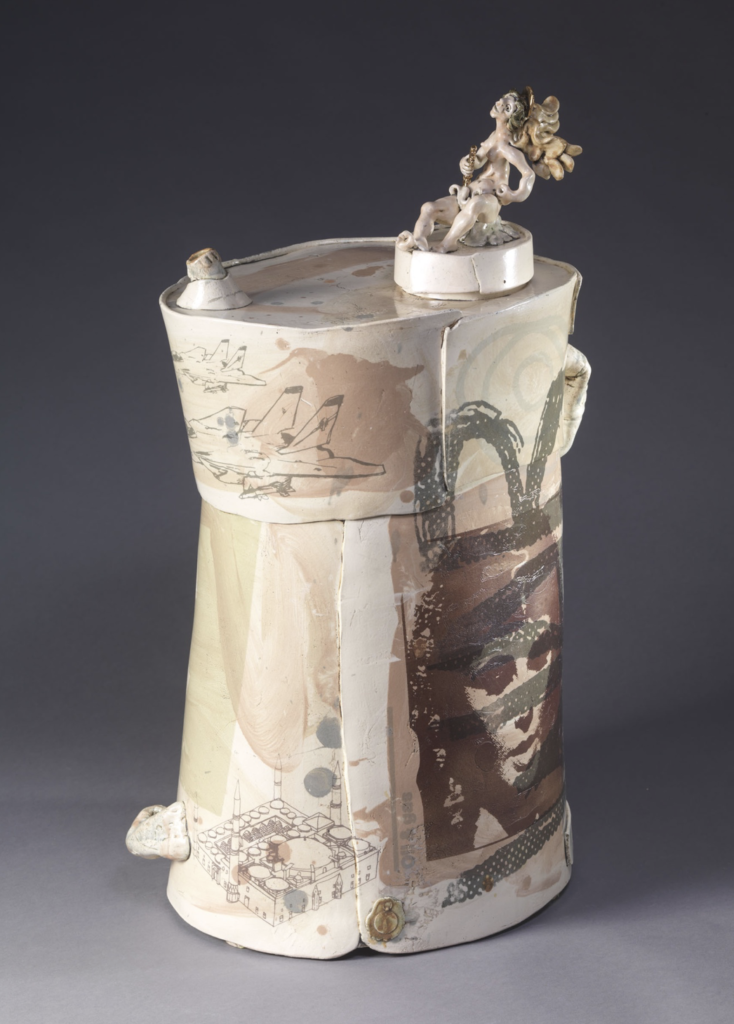