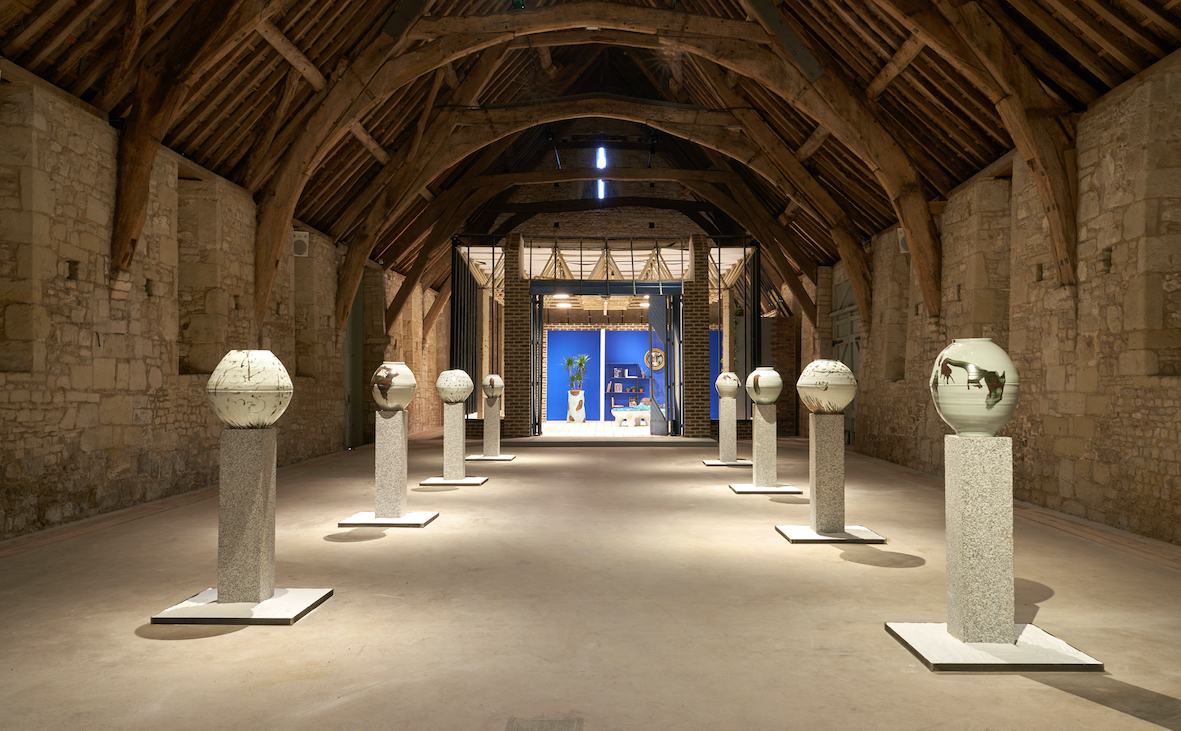 Leading ceramics expert Paul Greenhalgh (director of the Sainsbury Center, Norwich and author of Ceramic, Art and Civilisation) introduces two of the biggest names in Korean ceramics working today for their debut in London, as part of our focus on Ceramic across both London and Wiltshire venues.

Perhaps time is the single most important determinant in how we understand ceramic. It isn’t just that the discipline has a dauntingly deep and pervasive history – we are aware of fired clay objects from as early as 29,000 BCE – but that we have superb examples of them, from then through virtually every age up to the present. The lasting power of fired clay is unique: no other art has a lineage as ubiquitous or intense as this. Inevitably then, it leans on all contemporary artists who seriously engage with it. Contemporary ceramic has to deal with an ever-present memory, one that cannot easily be elided, and this is an inescapable factor in its aesthetic make-up.

Nowhere is this sense of cultural memory more powerful than in Korea, which has been host to a vital ceramic culture for millennia, and at various points in that long history, has been thought to be unrivalled. It took celadon to heights that even the Chinese struggled to match, and for some of us, the painterly porcelain vases of the Middle Chosun Dynasty are among the greatest achievements of world art. We understand as specific Korean contributions various types of relief and incised wares, and the magnificent form known as the moon jar. In one way or another, contemporary Korean practitioners have to deal with this giant, omnipresent heritage.

As with painting and sculpture, it isn’t always a blessing. Grand canons have the power to stultify experimentation, and to intimidate artists into unnecessary respect and imitation. Nevertheless, the greatest art in the modern period – and especially the greatest ceramic – has been that which forms a relationship with the past – absorbing, commenting, challenging, and even denying its implications –  in order to make art that moves us on.

Ree Soo Jong (born 1948) has long been recognized as one of Korea’s principal ceramic artists. Interestingly, while his output for several decades has essentially been about the vessel, in the extraordinary context he grew up in, his formation as an artist was quite different. His early reputation was driven far more by a sculptural approach to practice. Through the 1970s and 1980s, he developed a wide repertoire of organic, raw, abstract forms, which occasionally tipped into architectonic structures. He also worked with the human figure. Vitally, he has always been engaged with painting and drawing, running this thread alongside his ceramic activity. He is the painterly draftsman par excellence, and in many respects, drawing underpins everything he does.

He occasionally worked with the vessel through his earlier career, but it was really only from the mid-1990s that he committed to it in an ongoing, obsessive  way. Thus, he previously had a career of pushing, testing, experimenting, in which clay was moved through a wide repertoire of idioms, before the determination to focus this exploration on pots.

His work in the current exhibition essentially comprises of a number groups, each of which is an essay on the moon jar. The artist doesn’t say a lot in front of his work, but when I met him I his studio, he tellingly pointed out that traditionally, the rounded form of the moon jar was achieved by throwing two bowls, and then joining them together to create a spherical form. The join would be smoothed out, to hide the process. Soo-Jong frequently exposes the join to make it a core element in the vessel. He then uses his extraordinary technical control to push the form into new terrain. His language of lines, splashes, drips, dints, tucks, dents allows him to transform the moon jar into an emotive arena, a site of unmediated expression.

One of the artist’s great signature pieces is a tall white vessel derived from a moon jar, with a single dramatic gestural black brush mark across its face. It is a spectacular, existential statement about the fusion of past and present, and a quintessentially Asian – Korean – approach to the painted vessel. A sublime level of confidence brings thrown form and painted surface into unison, and painting and pottery become the same thing.

This method and philosophy of the painted vessel was known to European by the later 19th century, but it was most effectively brought to Europe by Bernard Leach and Shoji Hamada, who worked together in Japan. They returned to Britain in 1920, exactly a century ago, and profoundly impacted Western studio ceramic. So the visual language at work in Soo-Jong’s moon jars is now a truly international idiom. But few have ever practiced it like this: he has taken the idiom, and brought it profoundly into the 21st century. His moon jars are among the greatest pots of our times.

Ree Soo-Jong knew Hamada. Much like the Japanese master, there is a profound straight-forwardness in his vision of practice. Art historian Choi Gong-Ho commented that

Ree Soo-Jong does not use exaggerated rhetoric when he talks about his works. This implies that he thinks that true works of art are created when working with clay with your own hands rather than playing with words. He believes a day’s physical   labour is far more honest than ten seemingly great concepts. So, he says, working is his life.

He is acutely aware of global developments in artistic practice, and of the ideas that underpin it. But his life is squarely based in making things.

This sense of artisanship, of doing, seems to be part of the Korean attitude to culture. Lee Hun Chung (born 1967), describes his attitude to practice in much the same way as Soo-Jong. He tells us that

A kind of physical cognition: not a denial of ideas, but rather, an assertion that they cannot exist in isolation from the object. The role of the individual artist is to expose ideas through materials.

A generation younger, Hun Chung’s national reputation is as an artist who has engaged with conceptualist approaches to practice. He often works with large scale installations, that deliberately confound any demarcation between the various disciplines. Art critic Chang Dong Kwang tells us that “Lee is a potter, sculptor, designer, architect, painter, installation artist, poet, and labourer, because he is full of raw human character”. He also refuses to acknowledge any meaningful space between abstract and figurative art. Much of his work is multi-media, with large-scale ceramic sculptural forms at the heart of things. Running through all of this, is a socially-engaged range of imagery. The artist tells us that: “it feels good to live as an artist as a member of society, no more, no less”. His work resonates with what he finds around him, and is driven by an ongoing commentary on life. While there is subversive wit at work, the overwhelming feel of the whole is invariably of a joie de vivre, a gladness to be around, and alive.

As part of this creative vortex of activity, the artist still engages with the vessel, and ceramic as a material of architectonic and design potential. Over the last period of years the artist has developed an extraordinary range of furniture, effectively by expanding the role of the thrown vessel. His chairs, stools, tables and daybeds are created from modeled and thrown ceramic. Large vessels become stools, or the support for a day-bed. He uses the related technology of cast and polished concrete to create the flat planes to make the furniture work. More classically, large planters fill interior space, and function as major features in interior space. This work is the core of the current exhibition. And interestingly, he is still engaged in production pottery, running BADA, a company that produces a range of wares for a wide audience.

The Korean ceramic scene is one of the brightest and most complex in the global arena, and it remains at the heart of the national culture. The country boasts impressive ceramic theme parks, and it isn’t by chance that the world’s most important regular international gathering of ceramic art is the Gyeonggi International Biennial, near Seoul. When we peruse the work of these two extraordinary masters, brought to England in quantity for the first time, by the Messums Gallery, we realize why. 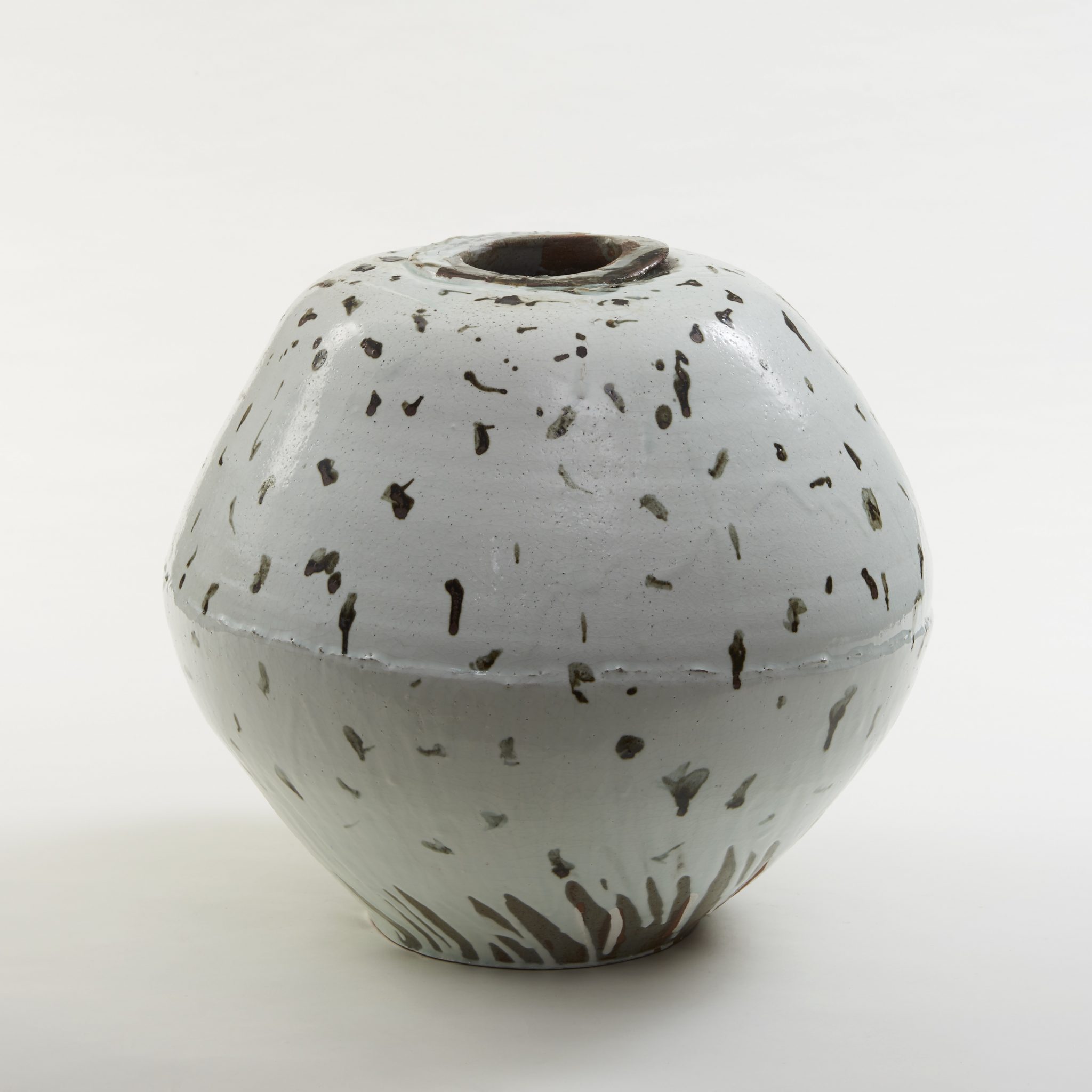 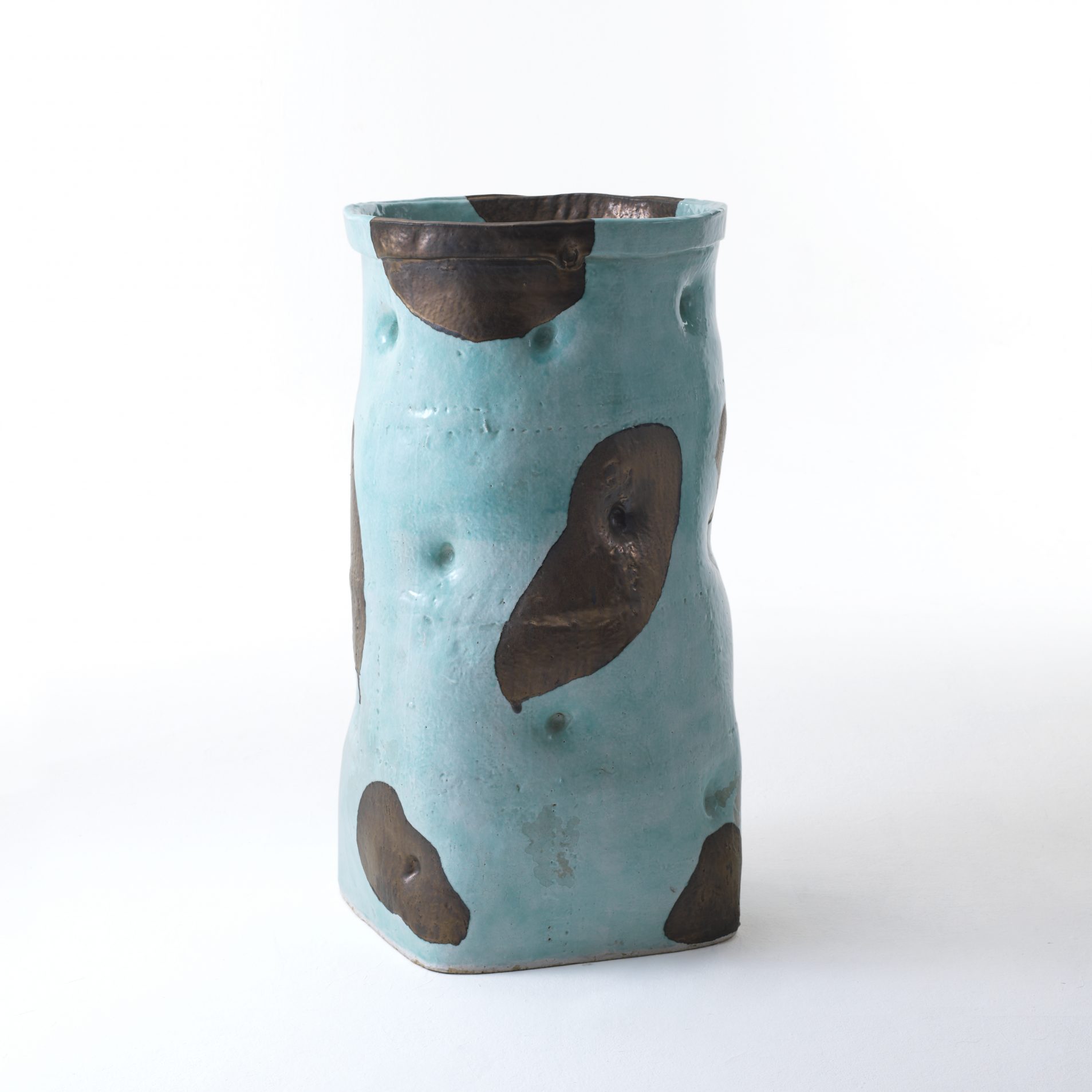