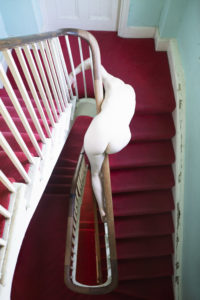 Exhibition goes live at 10am on 22 October
For an online collector’s preview please register interest:

On the occasion of the inaugural Art Print and Book Festival at Messums Wiltshire, we are delighted to present a selection of photographs by Polly Penrose that reflect her artistic practise over the last two decades. Penrose uses her body as an object, placing it in complex, often painful poses, within challenging spaces such as abandoned houses or agricultural landscapes. She works alone, using a 10 second timer in places that are often extremely uncomfortable or even dangerous, paying estate agents back-handers to gain access to the boarded-up houses, her preferred setting. The resulting images present her body as a complex and beautiful object that contrasts with the hostile environment. The pictures have a calm stillness that belies their reality and Penrose accentuates this by hiding her face from view. She writes:

‘Fitting in, hanging on, taking up space, working with what you’ve got. The comedy and tragedy of the uncomfortable shapes we assume whilst feigning a sense of normality and control. Sometimes it’s effortless, sometimes it hurts.’

In a world now filled with images of the self, Penrose references the evolution of representations of women across art history, and in her most recent works embraces the digital to curate non-human personas. Celebrating the body as a creative tool, her pictures jostle the opposed notions of vulnerability and empowerment, spontaneity and control, truth and fiction.

Polly Penrose studied Graphic Design at Camberwell College of Arts in London. She went on to work in Fashion Styling and after that worked for the photographer Tim Walker. She has always taken photographs but started to take the practice seriously when she entered and won a competition held by the London Photographic Association in 2008.

Penrose has been taking self-portraits on a ten-second timer and more recently a remote for nearly 20 years. Her work is unpremeditated and spontaneous and records her responding to her environment. She explores identity and the opposed notions of vulnerability and empowerment, comedy and tragedy. Her pictures focus less on sexuality and female allure, but retain the awkward, often beguiling force of the body as an object, pushed into a space, forced into a position whilst feigning a sense of normality and control.

She held her first solo show, A Body of Work, at the Downstairs at Mother Gallery, London, in May 2014, and her second solo show 10 Seconds at the Hoxton Gallery, London, in May 2016. The same year, she exhibited in the group shows Self Reflection at the Untitled Space, New York, and All Inclusive at the HVW8 Gallery, Berlin. In 2018, she showed work in Spring Break Art Show in New York, and at Messum’s Wiltshire as part of the group show Image. Her third solo show, Self Obscured, was at the Benrubi Gallery, New York in 2019, and the same year in Gossamer, curated by Zoe Bedeaux at the Carl Freedman Gallery, Margate. In September 2020, she exhibited in Emerging Contemporaries at the Michael Hoppen Gallery and A Picture of Health, Woman Photographers from the Hyman Collection, at the Arnolfini Gallery Bristol.