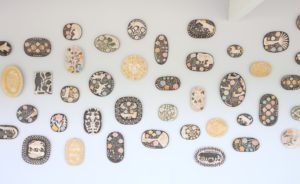 Makoto Kagoshima is famous the world over for his quirky and exuberant style of draughtmanship. Makoto creates joyful and dreamlike universes of curling tendrils, bursting blooms, charming animals, darting fish, soaring birds, strutting geese and alluring snakes from his imagination and inspired by his childhood. His bold, whimsical designs have proven so appealing that they have been used also for textiles, prints and murals.

Makoto trained as an artist, and then worked for the Conran Shop in Japan, but it is with clay that he has found his medium.  On carved and moulded terracotta bodies, whether plates, vases, tiles or simply designed, three dimensional animals, Kagoshima unfolds a joyful and dreamlike universe of curling tendrils, bursting blooms, charming animals, darting fish, soaring birds, strutting geese and alluring snakes. These highly stylised creatures and plants, some drawn from childhood memory, some swimming up from his dreams, may seem naive, but the designs are sophisticated, the colour sense refined and the craftsmanship accomplished. While each piece is unique, the design language is consistent, creating en masse a distinctive, exuberant imaginary world.  Although he first began to work with clay as a child, in his grandfather’s workshop, it was not until he was thirty five that Kagoshima was able to devote himself full time to his ceramics.  Since then, his bold, quirky designs have proven so appealing that they have been used also for textiles, prints and murals.