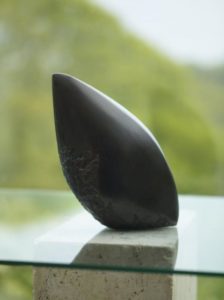 “Bridget’s figures, animal and bird sculptures were economically carved, capturing the essential characteristics of their nature or habit, a subject may appear to be soft, although the profile would be sharp as her sense of curve and rhythm – still her hallmarks – tell of form as well as the incongruity to be found in birds or beasts.”  Ann Elliott, author of ‘Touch and Time: The Sculpture and Drawings of Bridget McCrum’

McCrum’s work is a potent fusion of the ancient with the modern. She works primarily in stone, from which some pieces are also cast in bronze. Initially influenced by archaeological finds and by the work of Brancusi, Hepworth and Moore, her sculpture also contains oblique references to the landscape and fauna around her homes in Devon and Gozo. The basis of her work is a lyrical
abstraction of living forms, a process after which only the primary elements of her animals and birds remain identifiable.

McCrum was born in 1934 and went on to train as a painter with Lesjek Musjynski at Farnham School of Art in the 1950s. From 1980 she began to work primarily in stone, having learned her craft from John Joekes and Andrea Schulewitz on the South Downs. McCrum also works with bronze, a metal she uses to cast many of her stone pieces.

Bridget McCrum by Will Gompertz, Barbican Centre’s Director of Arts

A little while back, maybe three or four years ago, I was invited to speak at a sculpture exhibition in the west of England. My informal lecture was to be one of many over the course of a weekend celebrating an outdoor show of contemporary British sculptors. I can’t recall exactly what I spoke about (nor, I should imagine, can anybody in the audience) but I do vividly remember another talk given shortly after mine. It was by one of the exhibiting artists and was far superior to anything I could, or did, muster.

The speaker was Bridget McCrum, a sculptor whose work I knew, but not intimately.  Like most artists, she wasn’t exactly champing at the bit to stand up in front of a yurt full of strangers. She didn’t have any of the pro-speaker’s accoutrements. She was visibly nervous, there was a certain unfamiliarity with her slides (“now, why did I put that one in?”), and the talk was peppered with more “umms” and “ahhs” and “sorrys” than you’d hear at a Ryanair check-in. But you know what? It mattered not a jot. One hour later, we who had packed into the recently erected canvas tent until its seams creaked, were pleading for her to continue for another hour.

That didn’t happen. There were other talks planned. So, we mobbed her instead. Selfies, questions, congratulations, more selfies. We gushed, she blushed. For Bridget, it was the satisfactory culmination of a dreaded engagement. For me, it was a revelation.

I had heard a story about a woman who put her ambition to be an artist on hold until she’d raised her children. Who, in mid-life, made her first tentative steps in the art of carving stone, something she had wanted to do since the age of 5: an unusual aspiration for a little girl born blind in one eye. There was, she said, a fortuitous thread connecting her younger self – a war-time evacuee – to the artist she became thirty-five years later. That thread was Elisabeth Frink, the British modernist sculptor with whom McCrum enjoyed a life-long friendship. The two first met at school in Exmouth. Bridget was six, an exile from the Blitz in London; Lis was ten. They were horse mad, spending evenings drawing equine figures until it was time for bed.  They stayed in touch over the following decades, with Frink encouraging her old friend to try her hand at carving. And when Bridget did so, Lis continued to support, not only with words but also with deeds.

Bridget’s husband, Bobby, was more confident of his wife’s talent than she was herself. While she was away exploring the ancient landscapes of Somalia, he packed up two of her earliest sculptures and entered them for the Royal Academy Summer Exhibition. Bridget would have been horrified. Who was she to be exhibiting at the venerated RA? Bobby knew better.  And, so did Elisabeth Frink, who, on seeing Bottom (1984) installed at the RA asked her old friend to carve her a version of the nude lower torso for her own garden. Lis made only one recommendation: make it bigger!

Although Bridget has since moved away from human figuration in favour of birds, Bottom (a bronze edition of which is in the Messums show) fits into the overarching aesthetics of her practice. There is the simplified form that allows the eye to comprehend the piece as a single coherent whole, like a passage in a Bach Cello Suite. Less is more, no fuss. Balance is all. A sweeping line fades and then reappears as you move around the piece, invoking the optical effects the artist experienced among the dunes of the Arabian deserts. And with this comes a sense of rhythm and dynamism, of an object in motion, as light and shadow and perspective generate a kinetic energy. Such things are in the DNA of a Bridget McCrum sculpture or painting or drawing.

In the years since Bridget gave that talk in a tent, I have come to know her work a great deal better. As with most art of note, the more you look, the more you see; to the point where the invisible becomes visible. It seems to me that whatever medium she is working in, Bridget is as interested in the negative space as she is in her own interventions in the act of rendering a figure. Study her charcoal drawings of birds in flight and you will notice that the raw surface of the paper is far more than a plane on which to place a picture – it is playing an active part in the illusion: a collaborator in the creation of an image of a bird swooping through space.

The same applies to her sculptures. That they are elegant and graceful and sensual is plain to see, but what of the space around them? It is not a disinterested bystander. It has become part of the art, a contextual protagonist: an altered environment. The relationship between carved stone and landscape makes you ‘read’ each differently. This is why positioning is so important to Bridget: the surrounding physical space is part of her sculpture.

This, she explained in her talk. She showed us photographs. Some were of her working outside in the grounds of her house, which sits high above the River Dart in Devon, giving the artist a bird’s eye view of the birds circling below. Her slides reminded of the photos of Barbara Hepworth carving stone in her wonderfully terse A Pictorial Autobiography. Clearly, Hepworth has been an influence and inspiration to Bridget as a sculptor and also, perhaps, as a woman working in what has long been considered a man’s world. Hepworth’s muse was the rolling hills of Yorkshire, McCrum’s, the ancient objects of Mesopotamia: both artists finding their voice from bringing together the very old with the contemporary.

The Romanian sculptor Constantin Brancusi pursued a similar path, albeit from a different starting point. Bridget was trained as a painter at art school, Brancusi was taught wood carving. He left for Paris, she for a life as a Navy officer’s wife. They eventually arrived at the same conceptual place, with Brancusi leading the way, leaving a barely trodden path to follow. It was Brancusi who made the direct carving of materials – stone, wood, marble – fashionable in the eyes of the Parisian Avant-garde at the beginning of the Twentieth Century. It was Brancusi who showed what truths could be revealed when ancient stylised forms were combined with modern abstraction. And it was Brancusi who made the streamlined figure of a bird in space a subject for contemporary sculpture. But it was Bridget McCrum that set the bird free.

Brancusi’s birds tended to be static, Bridget’s are in motion: a Merlin on the tip if its wing, a raptor bearing down on its prey. Even when not in flight, her birds harbour a sense of imminent action: an awakening, or nesting, or – in the case of her knife birds – extravagant stretching. Some surfaces are rough, others are smooth. Some have been ‘scribbled’ upon, others are left untouched. Your senses become enlivened by the constantly changing nature of the material. Energy abounds in her sleek silhouettes.

Bridget ended her talk with images of the inspirational pieces and places she had seen and been on her many travels around the Mediterranean. Archaic knives and age-old axe-heads, giant rocks of salt and endless hills of sand; Egyptian hieroglyphics and Somalian artefacts. They are all there to be discovered in her work, which she continues to make day-in-day-out, even though she is now in her mid-eighties.

I was lucky enough to spend a few minutes with her once the crowds had cleared and the yurt was empty. She still looked a little worried. I was surprised, her lecture had gone so well. I asked what was troubling her. She said she had a lot of work to do for a big show in a colossal new space. Where, I enquired. In Wiltshire she said. Oh, what’s it called. Messums, she said.

She pulled it off, of course. And will do again. Welcome back Bridget. 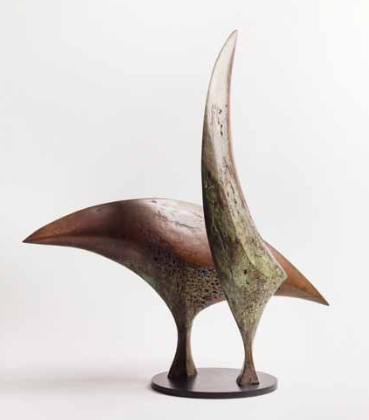 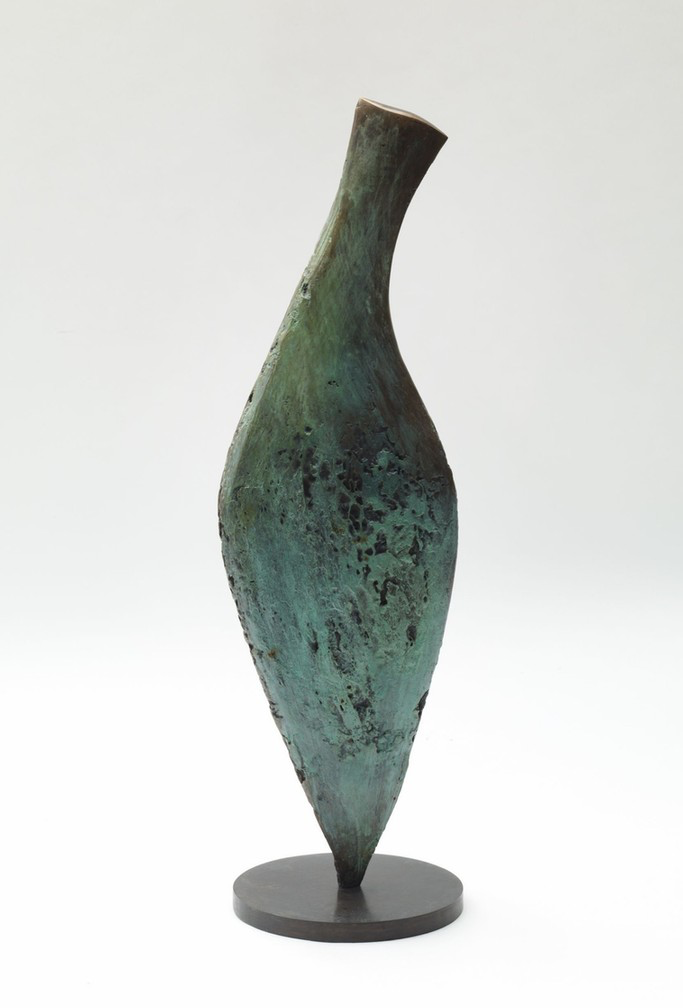 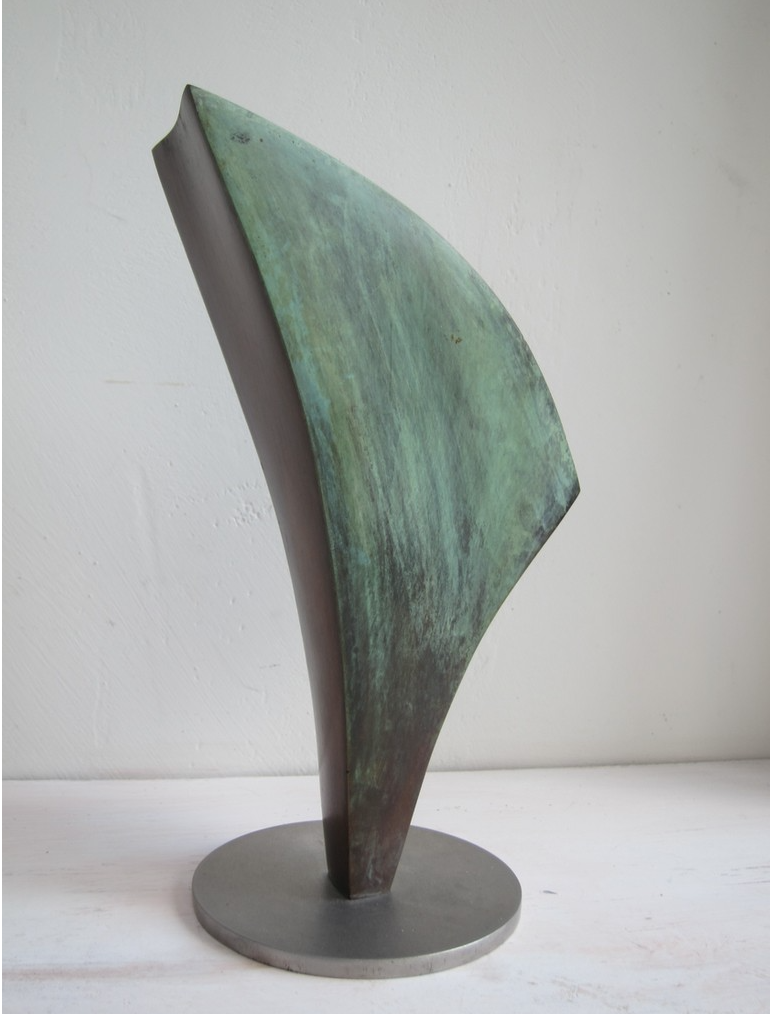 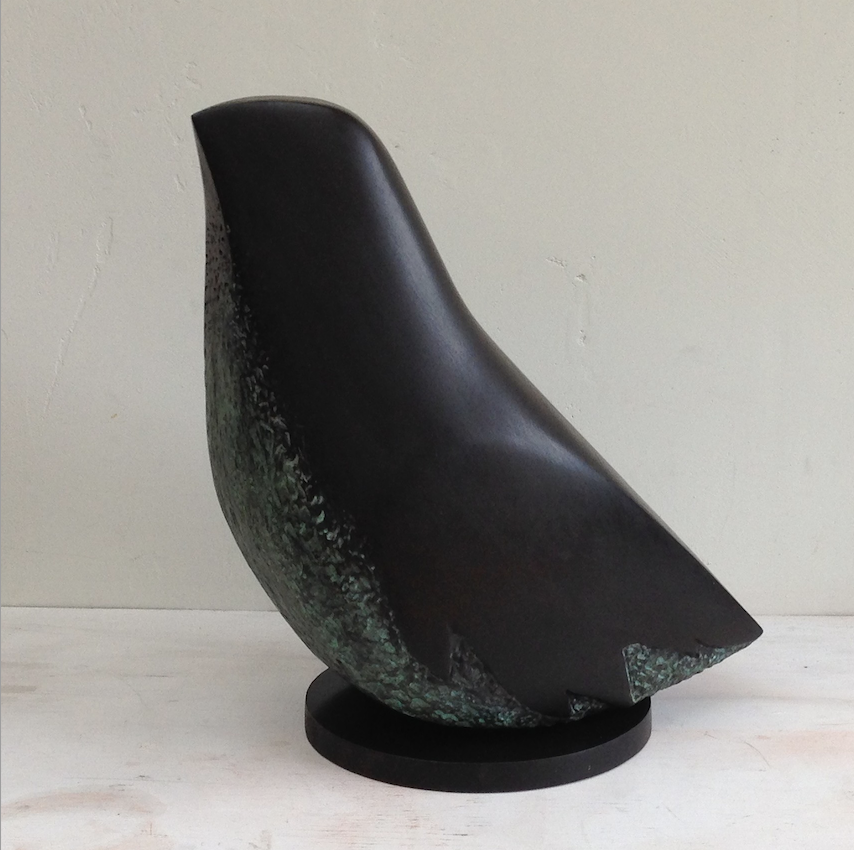 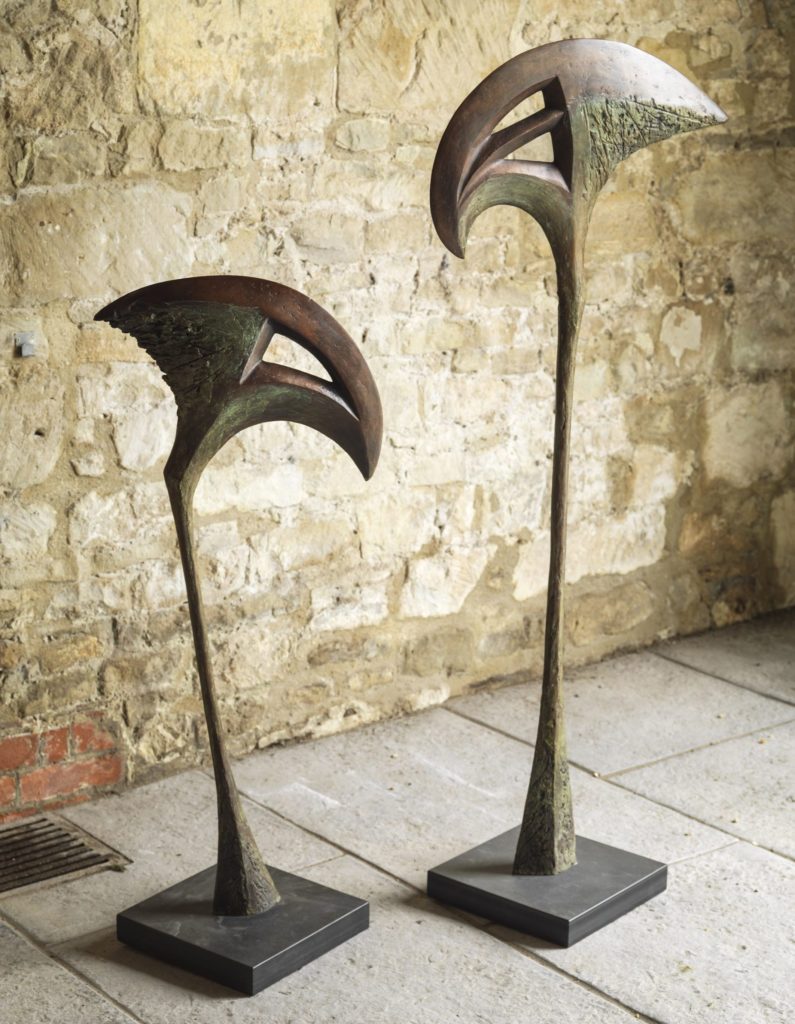 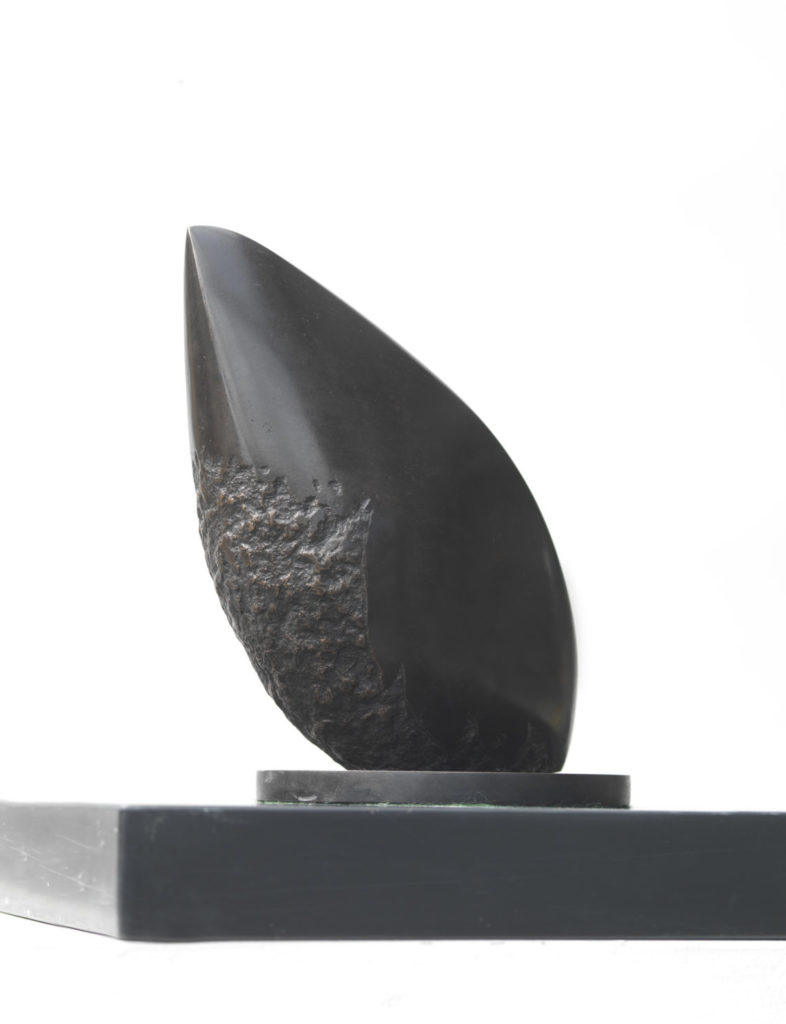 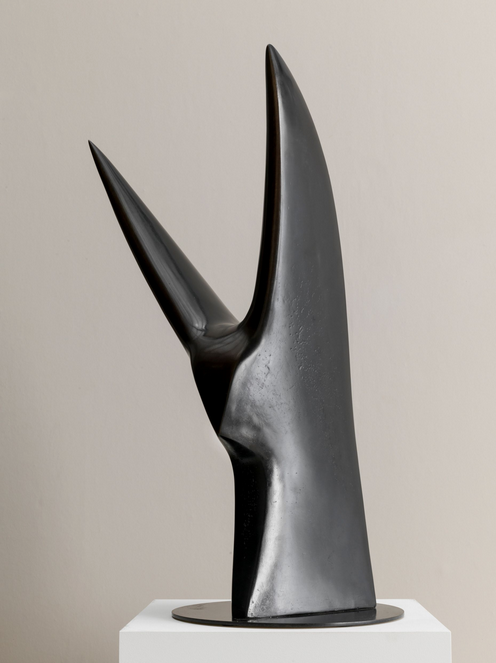 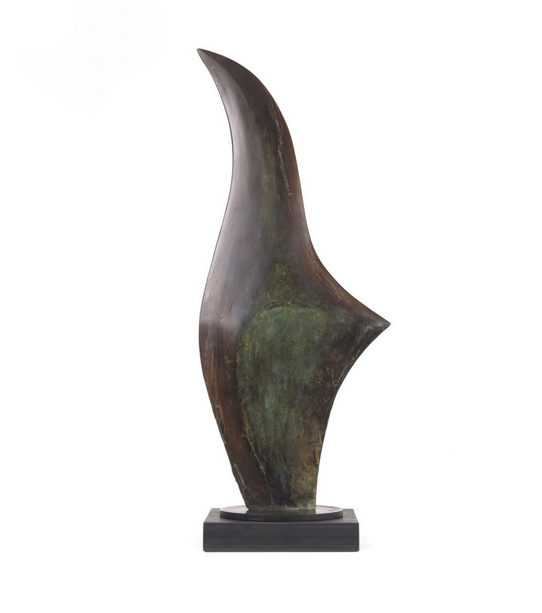 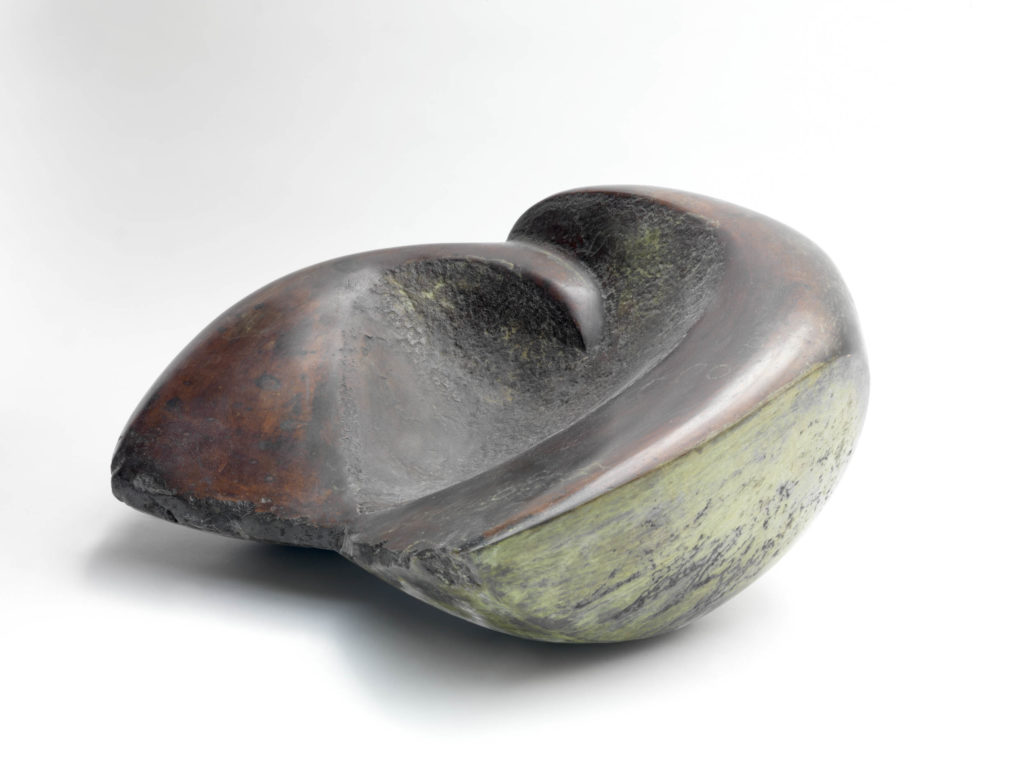 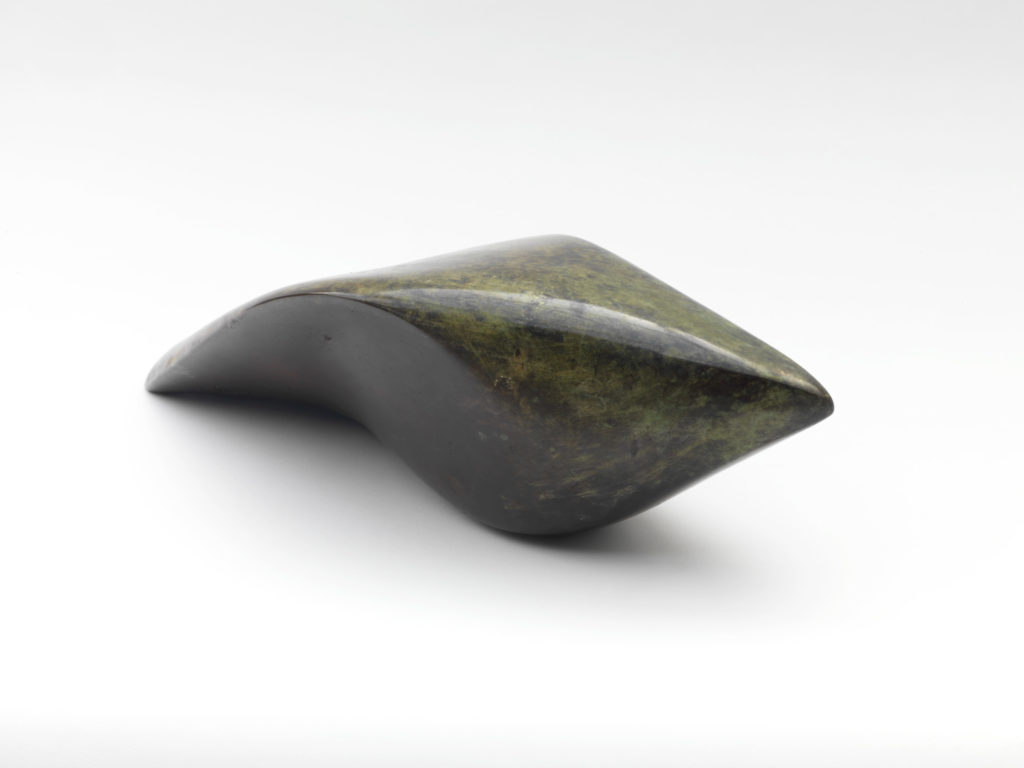 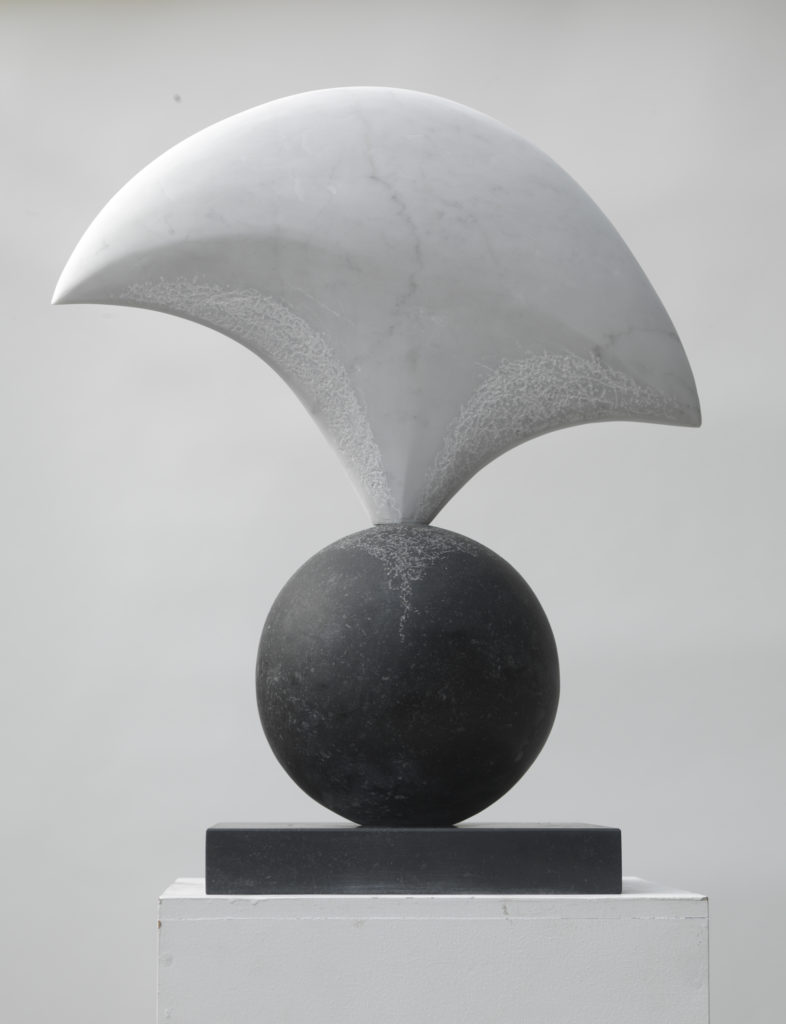 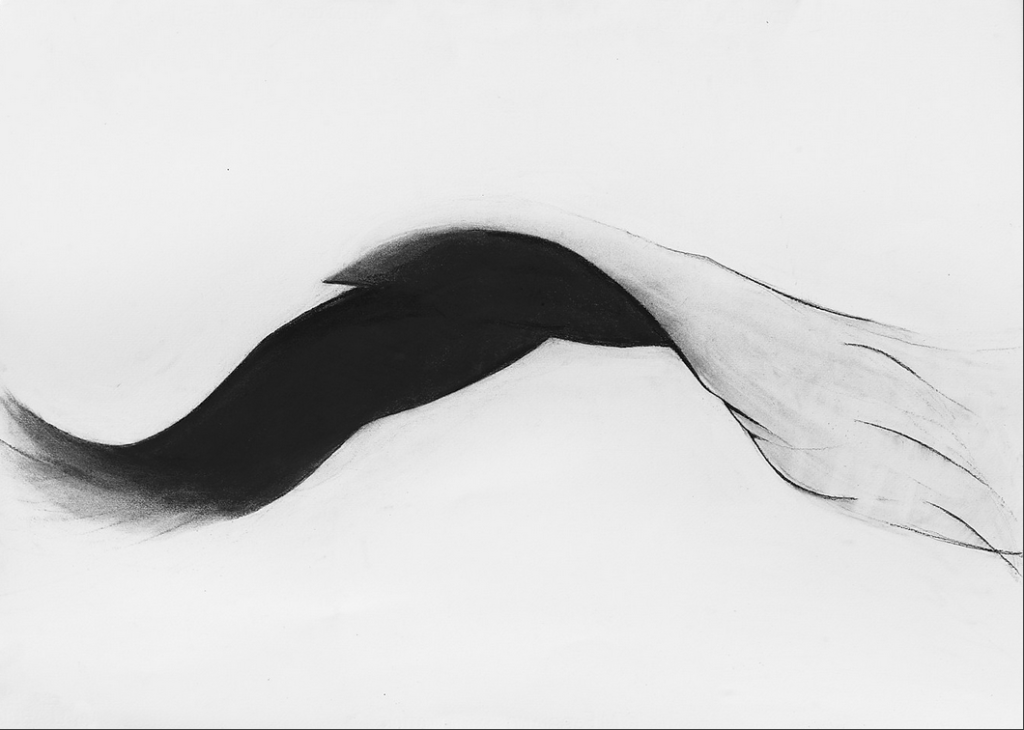 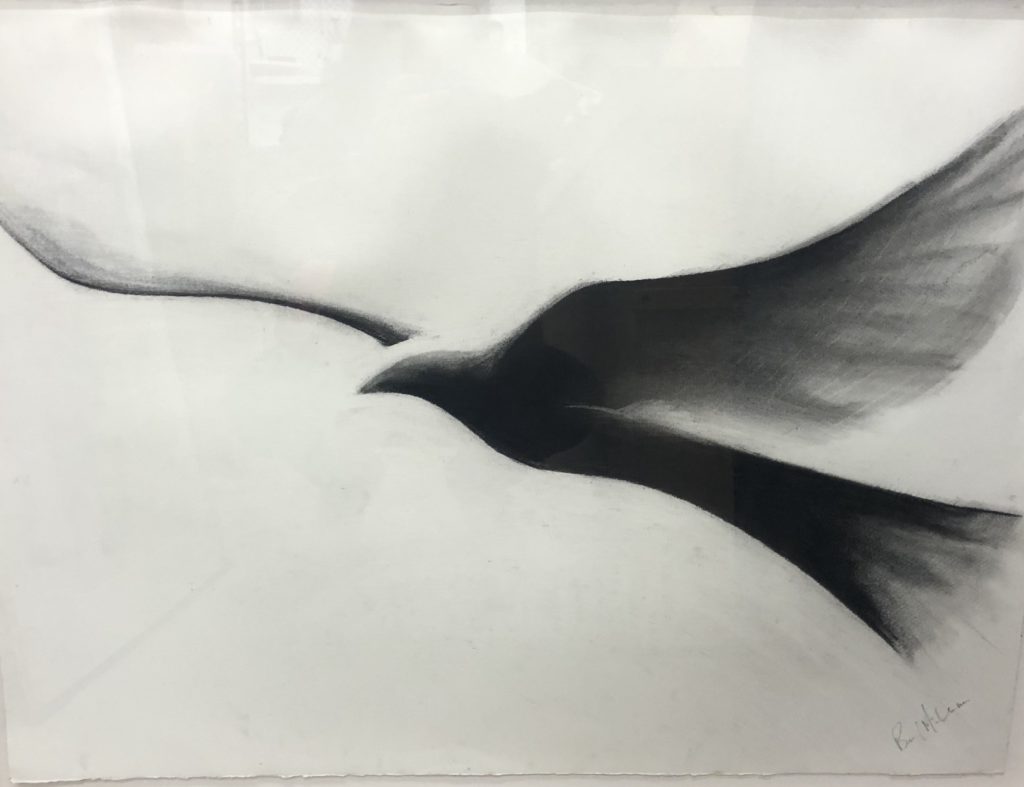 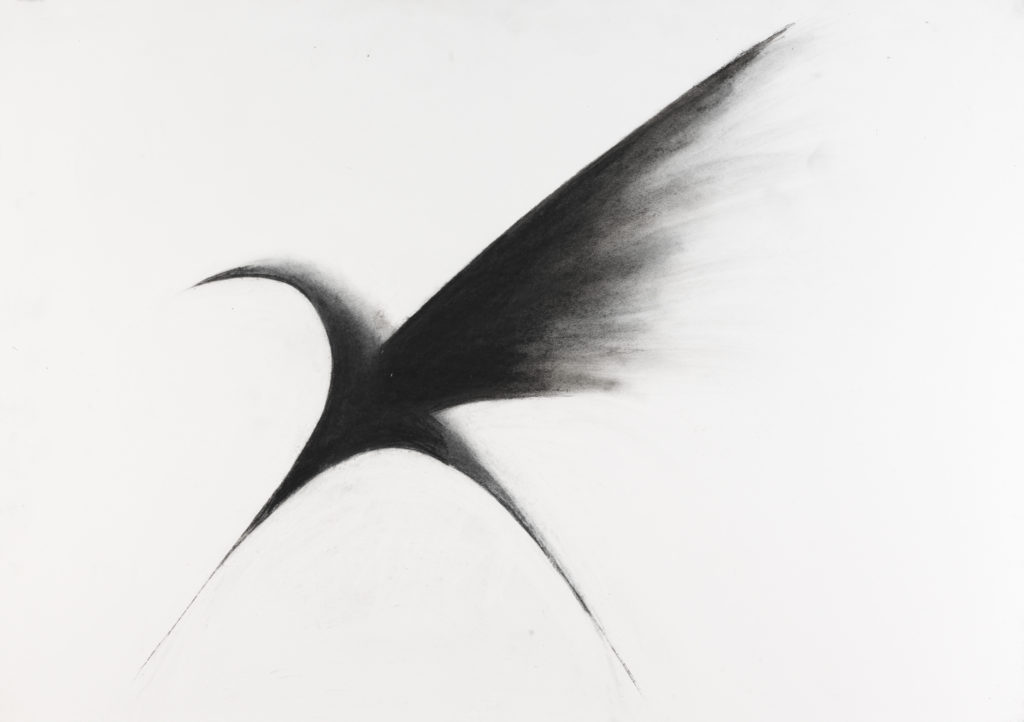 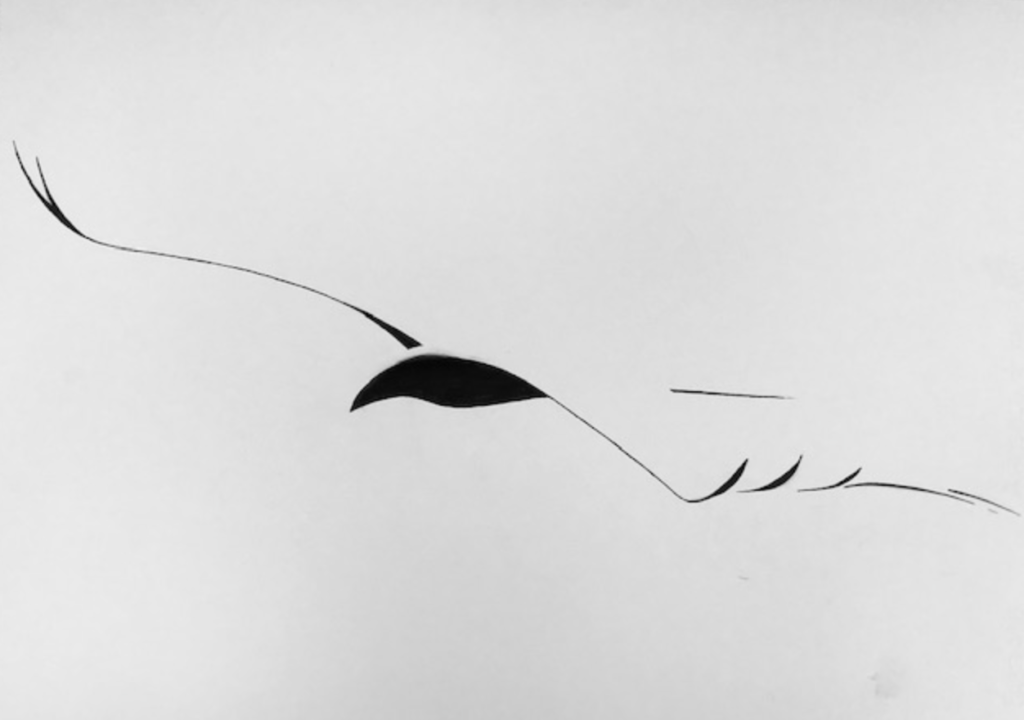 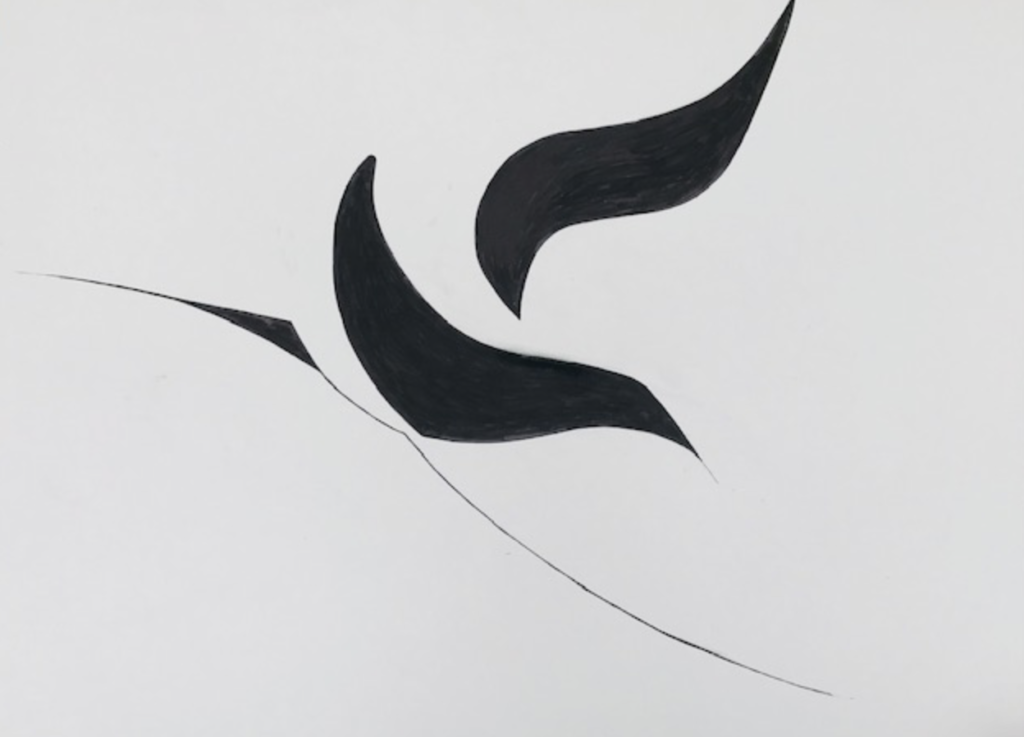 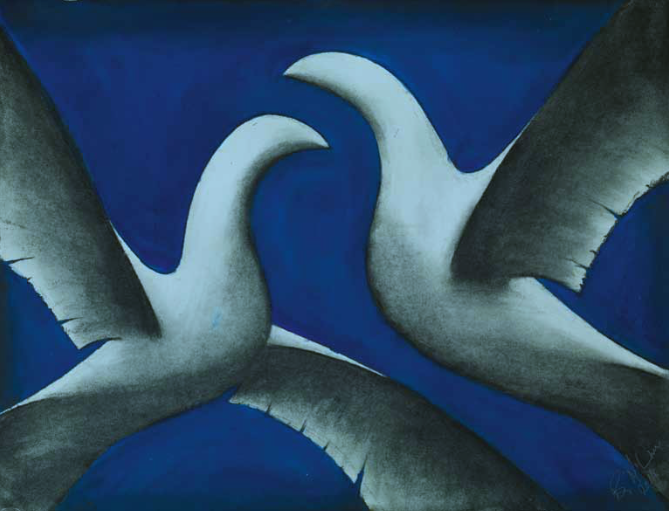