Exhibition opens at 10am on 22 October

This October, Messum’s Wiltshire is devoting its spaces to contemporary female artists. Each makes work centring around the body, using either their own or other bodies to reflect upon ideas around power, pleasure, and disgust. All of these women has interrogated the nature of flesh – abstracting it into sculpture, focussing on its surface or recreating it from porcelain. They ask the viewer to think about the female form and the politics of the gaze. Bodies are presented as objects or even deconstructed, far removed from the idealised nudes of previous generations. The body becomes a painful vessel or a tool – something to be used and viewed rather than admired or sexualised. These works question women’s roles – as makers, mothers, subjects, objects, lovers, to name but a few.

Polly Penrose’s series of nude self-portraits, entitled Chased by Swans, brings together images made in several locations over recent years. The title is taken from a text in which Penrose shares some of the situations she encountered while making her pictures. The stillness and apparent ease of pose that Penrose presents to the viewer is often the result of a great deal of repetitive physical pain coupled with potential danger. Penrose works alone, using a self-timer, in difficult spaces that are often abandoned or hard to access, such as condemned housing. She often seeks out empty family homes about to be gutted, embracing the histories that are stored within them, giving them a final exposure before developers move in. She talks about the tension between vulnerability and empowerment within her work. The risks in working alone and naked in a strange space can be frightening; overcoming that fear and using it to make a picture is exciting and empowering.

It is a trope of art by women that they work with what they have, and this is certainly Polly’s modus operandi – she becomes a sculpture or an abstracted shape, contorting herself and holding a pose. Sometimes she will attempt a pose up to sixty times, leaving her bruised and exhausted. What began as a necessity, not having the resources to hire models, has become a strength. She has given birth twice since her work began and has gradually aged before our eyes. Although her work is not diaristic, the inevitable evolution of her body reminds us of the shared reality of being human. These images are a form of escapism as Penrose uses her body to great effect, sometimes humorous, sometimes sculptural, but always anonymous (she never shows her face to the camera). This anonymity is essential: Penrose becomes a part of the image, no longer particular and certainly not personal but rather an object within a space. 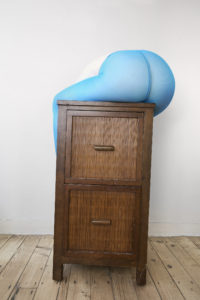 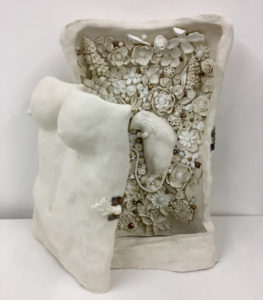 Working through ceramics, sculpture and installation Camilla Hanney’s practice explores themes of time, sexuality, cultural identity and the corporeal, often referencing the body in both humorous and challenging ways. By subverting traditional, genteel crafts she attempts to transgress and contemplate conventional modes of femininity, deconstructing archaic identities and rebuilding new figures from detritus of the past. By materialising the familiar in an unfamiliar context her work stimulates our ability to rethink our relationship towards objects, threatening the natural order and toying with the tensions that lie between beauty and repulsion, curiosity and discomfort, desire and disgust.

In Wandering Womb, a complex work of hinged porcelain, a female torso opens to reveal a fecund floral backdrop supporting a sleeping rat, its long tail curled like an umbilical cord. This is a reference to the medieval belief that the womb was almost creature-like and could wander around the body independently causing an array of mental health disorders and ‘hysteria’ in women. The piece suggests the multitude of real and metaphorical matter that we carry within and the depth of feeling that the body contains.

Paloma Tendero is a visual artist that works across photography and sculpture, exploring themes around genetic inheritance, hereditary and cycles of life. In her work, she explores periods of changes, pain, and metamorphosis that the body suffers. She reflects on the vulnerability of the physical shell, and the desire to celebrate life despite illness, representing the beauty in the flaws and errors that can occur in the body.

The series Flawed Beauty is presented as a large colour print with accompanying sculpture and a concertina piece that reveals the images as a series of evolving stills. In each image, Tendero presents herself as an antique sculpture, seated on a plinth and increasingly covered in small hand-made objects, which appear to be growing across her body, tendril-like and disturbing. The work questions our appreciation of classical sculpture (despite damage and imperfections) in contrast to the reality of the human body, subject to pain and flaws and beyond our control. 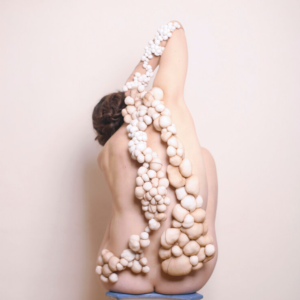