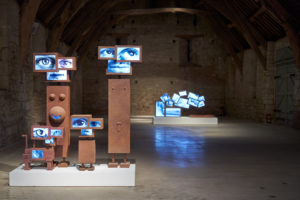 As part of our ‘Body Language’ exhibition this autumn, we are presenting a series of digital sculptures by artist Charlotte Colbert. Language, psychoanalysis and socio-political constructions of gender and identity are at the heart of Colbert’s practice. Her multi-part video piece, Benefits Supervisor Breathing, 2017 (pictured below) confronts the viewer with a re-take on one of the most recognisable nude paintings made in post-war Britain. Freud’s nude of the same title, painted in 1995, depicts Sue Tilley asleep on a sofa in his studio. The painting was a challenge to portraiture and the tradition of the recumbent nude. Colbert subverts these themes further, presenting Tilley as an active participant, as she wakes up at the end of the film, opening her eyes. 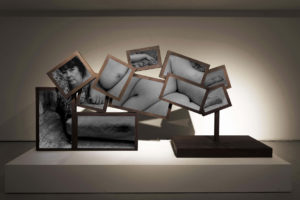 This act reverses the gaze, as the subject looks back at the viewer, demanding to know why we are looking at her, questioning the power dynamic between artist, subject and viewer. The piece is large and heavy – deliberately so. It has physical presence, presenting the nude as a fractured, abstracted collage of screens. These are framed in rusted metal, in contrast with the gilt frame of traditional paintings.

Colbert’s nude is confrontational, excessive, and engaging, re-framing the history of art from a female point of view. The film, made in Freud’s studio on the same sofa, demands that we question societal structures and the place of women within the art market. Freud’s painting was briefly the most expensive work by a living artist to be sold (while prices realised by women artists remain disproportionally low). It reminds us that Sue Tilley was paid very little for her time and did not benefit from the record auction price.