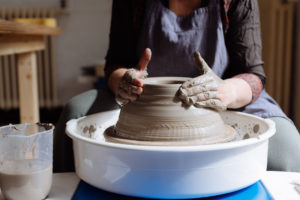 Messums Creative’s new art studios were humming with the low murmur of artistic fervour last weekend as students, both old and young, struggled to create sculptures of birds in clay.

Eagles, parrots, pheasants, blackbirds, pigeons and owls, formed a motley flock on their wooden perches in the large sunny studios, situated a short distance from Messums in Tisbury.

They were created with expert tuition from Finn Bush, who kept a beady eye on proceedings, prompting us with tips on how to create the right proportions of wing or beak, or which wooden and wire tools to use to create the effects of plumage. Some of the birds struggled to look as if they could fly and were assisted by a lateral pole that went through them end to end; others stood proud and upright on their wooden stumps.

Parrakeets were a particularly popular subject; inspired, said one,  by the fact they have almost become a native species.

One young sculptor decided to make a duck wearing glasses and a hat, carrying a walking-stick; a challenge for Finn on many fronts.

Whether much remains of the duck, let alone his accoutrements after he has been fired in the kiln remains to be seen.

The following day Sue Kelly taught a large group of novices into how to throw pots; starting with forming a spherical  ‘Christmas pudding’ out of clay, weighing exactly one pound.

From there we took off in all directions and discovered that the trickiest and most important part of throwing pots is getting the clay centred bang in the middle of the wheel in the first place.

As apparently easy as this looks, we quickly discovered that we were not all equal in our ability to do it: while some went on to gaily turn out pot after plate after vase,  stacking up a fine array of their wares on the large table in the middle of the studio, others were lobbing the wet carcasses of their attempts into a large dustbin, still struggling to form anything serviceable well into the afternoon.

However, we all triumphed in the end; proto Edmund de Waal vessels, as fine and wafer thin as paper stood next to boulders worthy of the Flintstones’ dining table and Sue’s gentle encouragement and patience had got us to the point that, by the end of the day, most concluded they would like to do it again.