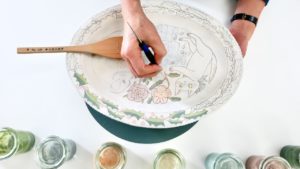 “It’s very hard for me to definitively categorise myself, because it has always been my philosophy to first and foremost do things which I personally find fun. I always hope to be able to combine the freedom of being an artist, along with the patience required of a potter, and the resourcefulness of a craftsman.”  Makoto Kagoshima

Excerpt from an article by Emma Crichton-Miller, journalist and TV producer specialising in the arts. She is a columnist for Apollo magazine and is also a freelance contributor to the Royal Academy of Arts