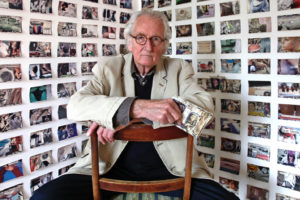 Exhibition goes live at 10am on 3 December
For advance information and a collector’s preview please register interest:

Ti Parks graduated from the Slade School in 1962. He moved to Australia in 1964 and became an important influence in the contemporary art world there. He was the Australian representative at the Paris Biennale (1973), the Sydney Biennale (1976) and as an invited performance artist at the Venice Biennale (2007). Since the 1960’s he has exhibited extensively in Australia, New Zealand, England and France.

Ti Parks lived and worked in Blackheath London after his return from Australia in 1976. He continued to exhibit and perform internationally until his death in 2017. Intuitive and intellectual, his work reflects his core belief in the importance of chance and playfulness. These ideas find wide-ranging expression in collage, etching, paintings, sculpture and performance.