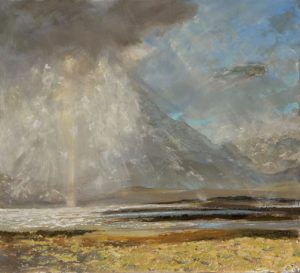 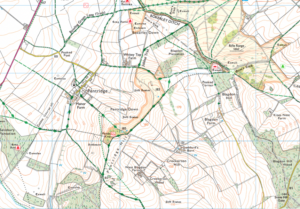 Come to a Neolithic walk and talk about the Dorset Cursus on Penbury Knoll to welcome the rising sun after the longest night of the year.

Richard will celebrate the start of the new solar year and to give insights into the historical significance of the winter solstice in advance of Hoare’s exhibition, Threshold.

In his book “To Bless the Space Between Us,” the Irish scholar and poet John O’Donohue writes: “A threshold is not a simple boundary; it is a frontier that divides two different territories, rhythms, and atmospheres.”

The latest pictures by Richard Hoare demonstrate that any landscape is defined as much by  where it leads to and what adjoins it, as by what it contains.

Most of the works in this exhibition feature the landscape of the remote and most westernmost fringe of Europe – the hills of Achill in Mayo and the north-west coast of Scotland.

Savage and sublime, these coastlines have been returned to again and again by Hoare who has captured their many personalities.

And as he has embedded himself more and more in this remote terrain, he has increasingly connected with the ancient cultures -resonating with their impulse to place megaliths and cairns and the siting of these structures.

But he does not attempt to document these sites in a literal way; more denote the powerful presence of place they harbour.

‘The cairns and megalithic tombs of the west coast of Scotland are clearly orientated with the same ancient understanding as those on Achill in Ireland, towards the setting sun and also the rising moon and certain constellations – like some  giant observatory or clock,’ he says. ‘I now understand that these stones are markers that configure together to form a ‘mechanism’ in the landscape. Together with the earth they stand on, they form a sacred landscape that is a wider place of gathering to witness various celestial events.’

A painting of Jura seen from a promontory in Argyll is a streak of jet amid a whorl of  yellows and aquamarines, showing the sun and moon in the same sky; something that actually happens when the moon rises over Kilmartin Ridge at the same time as the sun is still in the sky over Jura to the West. An orientation Hoare also found occasionally on Achill and can be seen in some of the pieces.

Equally, one of the mountain of An Sliabh Mor from Drumgollagh in Ireland, captures  a cloudburst as it engulfs the giant rock shimmering like  an enormous  pyramid of  light and water, melding  with the opalescent sea below. 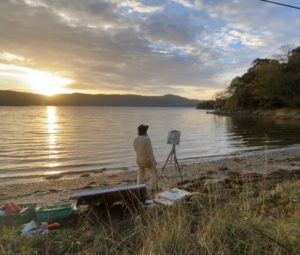 One of the most splendid works on show is of the sun setting behind the island of Eigg; the painting is an eruption of turquoises and golds as the blue sky gives way to sparkles and shards of light, reflected in the waves below.

These new pictures  by Hoare veer towards complete abstraction more than ever before; some of them have barely any figurative elements other than water and sky. Soaring paintings that suggest a new dimension in his art.

Coupled with the painting and drawing, he has also taken to making copious film and recordings from the area; all from his mobile studio, a semi-retired white Mercedes van containing everything including a hob, skylight, bed and kitchen sink.

The van, which once transported medical equipment and then household furniture , has a slight leak in the roof that Richard stems by propping the back wheels on stocks every night so that water runs away from it.

‘Having the van has been a liberation ’ he says.  ‘After having painted a picture in the morning, I can return to the van at lunchtime and work on it through recall and intuition. There can be sheet rain and hail outside which I can capture and then still save the picture and work on it, inside.’

Stepping inside the van, Richard crosses a threshold into a haven of his own making. He is removed from the wild world outside yet fully immersed in it as the pictures in this exhibition so admirably demonstrate.