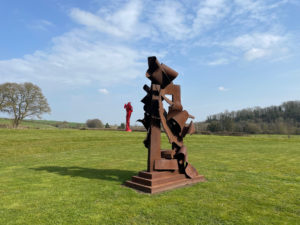 ‘The larger works have the feel of elemental forces, harnessed by the artist, who is holding it all in check for us. But at the same time, they deal in minutiae, and have the detail we usually assign to jewellery… Paley’s ability to compose in this way is exceptional.’    Paul Greenhalgh

Messums Wiltshire is delighted to present an exhibition of major architectural sculptures by American master metalsmith, Albert Paley, in the grounds of our gallery in Tisbury.

Paley trained at the Tyler School of Art in Philadelphia in the early 1960s. He initially established a profile on the American scene through his jewellery, though from the start his work was always sculptural. Moving out of precious materials and stones into a wider range of forged metalwork, he made the forge his principal vehicle of expression, with a major breakthrough coming in 1974 when he won a commission to create the Portal Gates for the Renwick Gallery (part of the Smithsonian Institute in Washington). This work initiated a commitment to the art of gates, entranceways and doors, that still informs much of his practice and which led to the creation and installation of masterworks all over America. The V&A Museum recently purchased one of Paley’s gates, which is on display in their metalwork gallery, joining existing examples of his work within the collection.

‘The symbolic and aesthetic sensibility in Paley’s work reveals a consistency of mind, a view of the world, and an organic flow that ties it all together, from [his] early brooches to the monuments that contribute to cityscapes all over America. The artist has often talked about humanism, and the need for art to relate to people, in all their complexity. That is why he has committed himself, through the decades, to an art that lives in domestic and public, urban space. It is one of the most important oeuvres in metal or any other material of the last hundred years.’   Paul Greenhalgh

Whilst Paley’s work has been a global one for a long time, there have been few opportunities on this side of the Atlantic for the public to see it. Away from the prototypical urban environs of New York’s Park Avenue and Washington DC’s Pennsylvania Avenue, and set against the magnificent 13th century tithe barn at Messums Wiltshire (one of the largest thatched buildings in England), these monumental sculptures reveal their timelessness and universality.

The presentation will be accompanied by a display of the artist’s smaller-scale sculptures and gates, together with his drawings (9 – 23 April 2022). In these, what Paley describes as the ‘implied movement’ in his sculptures is given free expression, revealing his talent as an architectural draughtsman on a par with Hector Guimard as well as those other American greats, Louis Sullivan and Frank Lloyd Wright.

Paul Greenhalgh is a writer, historian and curator and is an expert on the work of Albert Paley. He is currently Director of the Zaha Hadid Foundation.