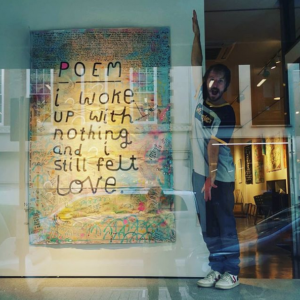 Artist and poet Gommie will join us on Zoom to perform some of his latest poetry written during lockdown.

Known for roaming from place to place on foot Gommie’s practice is centred around using the poem as a vehicle for weaving together individual and national notions picked up on these journeys. The poems are often performed and transformed in to a series of brightly coloured paintings. This new body of work written during lockdown from snippets of conversation held on his government sanctioned daily walks or with friends and followers online, represent a nation in flux. A visual and oral record of thoughts and feelings during unprecedented times.

All attendees will receive a Zoom link prior to the event.

ONLINE TALK: If you like you can just snog me & then drop me off at the hospital

What does a travelling poet do during lockdown? Join us for a talk with Gommie and an introduction to his new body of work on the day his new online exhibition opens to the public.

“On Tuesday 17th of March 2020, I was in Llandudno Junction in North Wales. Boris had just shut the pubs and I realised that I could no longer morally roam from place to place the way I had been doing.”

Lockdown has affected us all and no more so than artist and travelling poet Gommie. Taking government sanctioned daily walks Gommie began mapping out the shape of our new way of life. Noting fragments of language coming to the fore and engaging more with life online.

“I had some beautiful and hilarious conversations with people from all over the world about their experiences of lockdown. I realised how romantic so many of us are. How funny and silly and poetic we all have the ability to remain during abrupt change.”

Join us for an online talk and Q&A with the landscape artist Kurt Jackson during the week his new exhibition ‘Time & Tide: the Port Quin Paintings’ opens on our website.

The show consists of a series of 25 paintings positioned on a tideline, a point on the coast to engage with the idea of this shifting transient marker. For this collection Kurt chose Port Quin as his inspiration, a North Cornish cove he has known since childhood.

All attendees will be emailed a Zoom link ahead of the talk.

Join Inuit art specialist Pat Feheley for an online talk on Zoom as an introduction to our Inuit sculpture exhibition.

As part of our online programming, we are delighted to present a collection of significant Inuit sculpture from the mid to late twentieth century from a single owner collection. Beautiful objects in their own right and a lasting record of the Inuit culture past and present, Inuit sculpture also plays an important role in the development of Western art.

Gallery owner and Inuit art specialist, Pat Feheley will discuss the works in the exhibition on Zoom with a chance to ask questions afterwards.

All attendees will receive a link to join in the event.

Join Michael Morpurgo at home via Zoom for an online talk and book reading followed by a Q&A with the author. All attendees will receive a Zoom link prior to the event.

‘Muck & Magic’ is an inspiring and empowering story about a girl who discovers a hidden talent. A contemporary countryside tale about the power of friendship and creativity, from the nation’s favourite children’s author and beautifully illustrated by Olivia Lomenech Gill (J. K. Rowling’s Fantastic Beasts and Where to Find Them). Bonny has always wanted to be a top cyclist, maybe even a future Olympic champion. But her world changes after meeting a sculptor named Lizzie, who is inspired by Elisabeth Frink, a great friend of Michael’s.

Michael Morpurgo has an unparalleled reputation as a children’s storyteller. He was Children’s Laureate from 2003 to 2005, has written over 100 books and is the winner of many awards, including the Whitbread Children’s Book Award, the Smarties Book Prize, the Blue Peter Award and the Red House Children’s Book Award. His books are translated and read around the world and his hugely popular novel War Horse is now both a critically acclaimed stage play and a highly successful film.